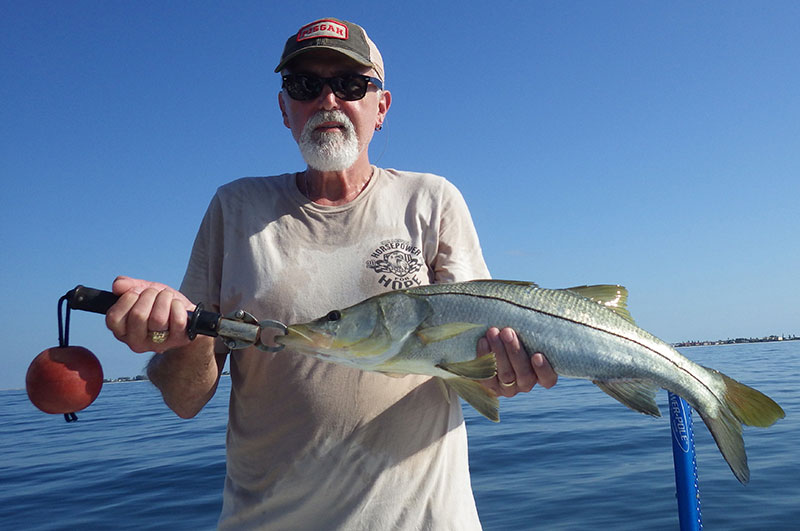 Brian Johnson, visiting Anna Maria Island from Illinois, shows off a nice linesider Sept. 24 he caught in the nearshore waters on a charter fishing trip with Capt. Warren Girle. Johnson hooked up with several snook and some mackerel on shiners. All fish were released.

Fishing the inshore waters surrounding Anna Maria Island is beginning to improve as we move into fall. Cooler nigh temperatures seem to be bringing water temps down slightly, triggering the beginning of migrations for a number of species.

Baitfish such as scaled sardines — or shiners, as we call them — are in abundance in Tampa Bay and along the Gulf beaches. This, in turn is causing a mass feeding of many predatory fish.

On the flats, catch-and-release snook, redfish and spotted seatrout are gorging themselves in preparation for winter.

You’ll find mackerel, jacks and ladyfish in on the feed over deeper grass areas and along the beaches. Finding structure in Tampa Bay also is providing action, especially if large schools of bait are present. In these areas, mangrove snapper and gag grouper should be present, as well as large Spanish mackerel.

For those who fish offshore, anticipations are high for the upcoming migration of kingfish. With large amounts of threadfin herring being reported offshore, that bite shouldn’t be too far off, but we need the water temps to drop a few more degrees.

Blackfin tuna are in the crosshairs of the offshore fishers. And the Florida Fish and Wildlife Conservation Commission has approved regulation changes for tuna that will go into effect Jan. 1, 2020. The changes create a recreational limit for blackfin tuna of two fish per person or 10 fish per vessel, whichever is greater, and extends these regulations into federal waters.

Lastly, gag grouper will be more apparent as the month marches on.

On my Southernaire charters, I’m targeting a variety of species. Fishing the flats around mangrove edges is yielding good action for sport fishers on catch-and-release snook, as well as some catch-and-release redfish. Both are responding to free-lined live shiners. When targeting these fish, accuracy in casting is imperative because most of the snook and reds are laying under the roots and bushes. On some occasions, chumming heavily brings out the fish, but only briefly.

Fishing deeper grass flats is resulting in great action on Spanish mackerel and catch-and-release spotted seatrout. In some areas, I’m seeing a bite on every bait cast into the water. There are ladyfish and jack crevalle in the mix, which adds variety to the bite.

Lastly, I’m seeing pompano over deeper grass flats. The bite is random, as these schools are on the move. But on days when I’m lucky enough to nail them down, it is game on.

Capt. Aaron Lowman is targeting catch-and-release snook along the mangrove shorelines of Tampa Bay. Chumming with live shiners is drawing snook out of the bushes to feed, which makes it easier to present a bait. Most catches are 20-26 inches, although some lucky anglers are hooking into a fish over 30 inches.

While targeting the snook, Lowman also is putting clients on catch-and-release redfish. The reds are foraging around the mangroves, which makes them easy to target, and fishing structure in Tampa Bay and in the Gulf of Mexico is yielding action for Lowman’s clients. Spanish mackerel and mangrove snapper are reacting to free-lined live shiners over the artificial reefs.

Capt. David White of Anna Maria Charters, back from vacation, is fishing in the inland waters of Tampa Bay and its adjacent waters, such as the Manatee River and Anna Maria Sound.

Catch-and-release redfish are coming to the hook for clients during the lower stages of the tide around sandbars and edges or grass flats. Casting live shiners or dead, fresh-cut ladyfish chunks is achieving a bite. Catch-and-release snook fishing is on the up and up for White’s charters. Fishing mangrove edges and grass flats is yielding good action.

Capt. Jason Stock is patrolling the offshore waters in the Gulf of Mexico for kingfish and blackfin tuna and other migratory species. Offshore structure, such as wrecks and ledges, is prime territory for either species. When fish are spread out, Stock is slow-trolling bait over these areas. When the fish are concentrated, anchoring and chumming is effective.

Jim Malfese is seeing an abundance of Spanish mackerel in Tampa Bay at the Rod & Reel Pier , where fishers using speck rigs, small jigs or silver spoons are enjoying the action on the high-speed fish.

Mixed in with the mackerel bite are blue runners, jack crevalle and ladyfish, which adds a nice variety to the bite. Fishers using live shrimp as bait are bagging good numbers of mangrove snapper and also hooking up with some catch-and-release redfish. Larger baits, such as pinfish, ladyfish or mojarras, can attract some big catch-and-release snook to the hook at their pier.

Moving inshore to the waters of Tampa Bay, Girle is putting clients on numerous catch-and-release spotted seatrout on deep grass flats. The flats also are host to Spanish mackerel, ladyfish and jack crevalle.

On shallower flats, closer to the shore, Girle’s anglers are hooking into a fair number of catch-and-release snook and redfish.