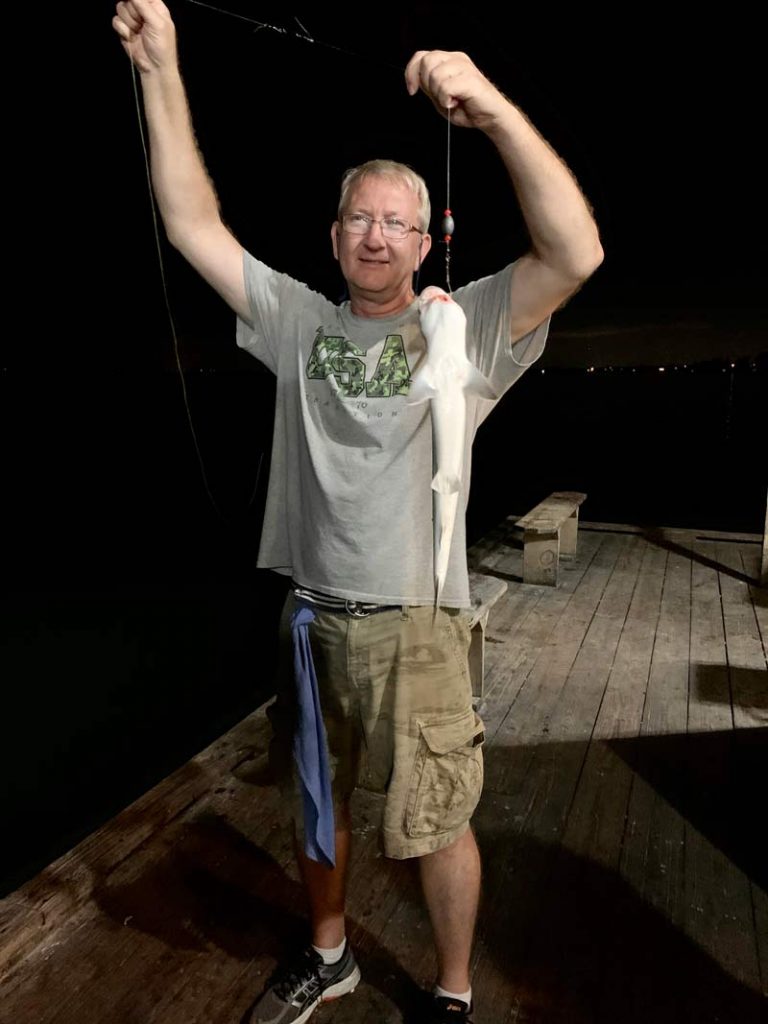 Rory White and his wife, Tammy, both caught sharp nose sharks, one after another Oct. 31, while night fishing on the Rod and Reel Pier in Anna Maria. Rory White said earlier in the day he also caught a catfish, a duck and hooked two dolphins. The couple vacation in the area twice a year from Lebanon, Tennessee. Tammy White said that was the first shark she caught. Her husband said he has caught several. Islander Photo: Arthur Brice

Fishing around Anna Maria Island is productive — provided you don’t mind fishing in the wind.

Fishing inside Tampa Bay tucked up close to mangrove shorelines is producing some good fishing for catch-and-release snook. You also can find a few catch-and-release reds mixed in. You want to target these areas during the higher stages of the tide in order to be able to approach the mangroves. Casting skills are a virtue, as these snook and redfish will be hiding under the roots and branches. They have it made in the shade.

If you can’t cast accurately in the shade, you might as well go do something else because the fish won’t come out to chase a bait. Still, you’re in luck. Fishing the deeper grass flats in open water is productive for catch-and-release spotted seatrout. Free-lining live shiners in these areas is resulting in many trout, as well as Spanish mackerel, jack crevalle and ladyfish.

On days when the winds are lighter and the seas are calm, it’s in your interest to investigate the nearshore reefs in Tampa Bay and the Gulf of Mexico. The structure in the bay is host to mangrove snapper and gag grouper, as well as Spanish mackerel. Fishing structure in the Gulf provides much of the same action, but the macks are more abundant and larger than those in the bay. You can add some black tip sharks to the mix, too.

Moving out into the Gulf, mangrove and yellowtail snapper are being caught while bottom fishing around ledges. Offshore wrecks and springs are producing good action — especially for amberjack, kingfish and permit.

On my Southernaire charters, I’m enjoying action on catch-and-release snook along the mangrove shorelines of Tampa Bay. Most catches are 20-26 inches, but the sheer numbers of hookups makes targeting these fish exciting. I’m seeing a few catch-and-release redfish mixed in with this bite.

Meanwhile, deeper grass flats are producing some trout. However, because the wind has clouded up the water, I’m having to do a little searching.

On calmer days, I’m heading into the Gulf to get in on the Spanish mackerel bite, which is on fire. We’re hooking into macks just about every cast. Large blacktip sharks are in the area, too, and readily taking whole, legal-size macks free-lined behind the boat on a wire rig. The biggest blacktip hooked this past week on my charters was pushing 6 feet.

Lastly, for those looking to fill the cooler, I’m working structure in Tampa Bay and in the Gulf, where mangrove snapper and Key West grunts are the targeted species.

Capt. Aaron Lowman is catching plenty of Spanish mackerel around structure in Tampa Bay and the Gulf of Mexico. Also, while over structure, Lowman is putting clients on mangrove snapper and some gag grouper. Fishing mangrove shorelines is producing numerous catch-and-release snook during the right tides, where the catch-and-release reds also are in the mix.

Lastly, Lowman is finding a lot of catch-and-release spotted seatrout over deep grass areas where clean water exists. Mixed in are bluefish, jack crevalle and ladyfish.

Capt. David White of Anna Maria Charters is targeting catch-and-release snook and redfish throughout the inshore waters of Tampa Bay. Using live shiners as bait is yielding some slot-size snook, as well as reds up to 36 inches. Anglers looking for a meal are being rewarded with side catches of mangrove snapper and Spanish mackerel, as well as an occasional black drum. For bigger action, numerous blacktip sharks are taking the bait around structure within 3 miles of the beach.

Capt. Jason Stock says the amberjack bite is really starting to turn on. Casting various live baits or artificials is attracting these voracious predators to bite. Also, while offshore fishing for amberjack, Stock is encountering permit and kingfish. On nearshore structure, the action is just as good for a variety of species — Spanish mackerel, bonito, blue runners and blacktip sharks. When targeting food fish for his clients, Stock is having good results on nearshore and offshore ledges for yellowtail and mangrove snapper, as well as almaco jacks.

Jim Malfese at the Rod & Reel Pier is seeing good action despite the strong winds and murky water. Pier fishers using live shrimp as bait are catching numerous catch-and-release redfish. Using a weighted rig combined with the shrimp and casting it under the pier is resulting in numerous bites. Along with redfish, pier anglers using shrimp are hooking into sheepshead, flounder and mangrove snapper. Using larger baits, such as pinfish or grunts, is yielding some large, over-slot catch-and-release snook. Bull sharks are frequenting the pier and taking fresh-cut chunks of Spanish mackerel and jack crevalle.

Speaking of mackerel, numerous macks are being caught on small white or pink jigs. Mixed in with the macks are jacks and ladyfish.

Capt. Warren Girle is working structure in Tampa Bay for variety. The most prominent — Spanish mackerel — are readily taking live, free-lined shiners paired with a longshank hook. Adding some weight to the rig to get the bait down towards the structure is yielding mangrove snapper and juvenile grouper.

Moving to the grass flats, Girle is putting sports anglers on catch-and-release snook and redfish. Casting live shiners to these fish is working well, especially for the snook. For the reds, shiners are working, although Girle says he’s catching more on soft plastics combined with a jighead.