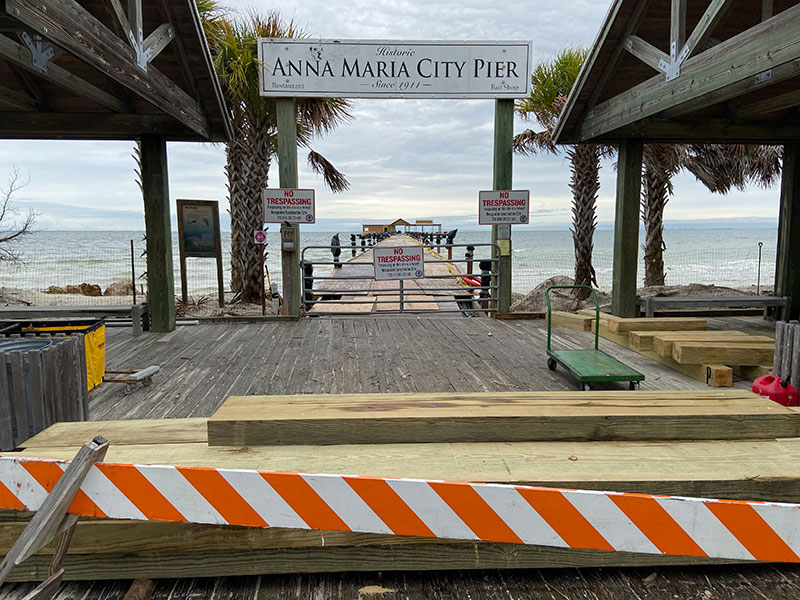 The design conflict at the new Anna Maria City Pier may not be an issue much longer.

Mayor Dan Murphy told The Islander Nov. 15 that Mason Martin, the contractor hired to build the T-end restaurant, restrooms and bait shop, was to begin resolving the issue Nov. 18.

The resolution involves adjusting the buildings for the pitch of the concrete base. Stormwater will drain through the wood decking of the walkway, but the T-end is a solid concrete platform that is designed with a pitch — a slant, slope or slight angle.

Ayres Engineering designed the concrete platform at an angle to allow stormwater to drain to the side.

However, architects from the Schimberg Group designed the buildings that will house the restaurant and bait shop for a level surface.

A solution involves raising door headers, leveling floors with additional concrete, expanding drain holes in the platform and adding a curb around the base.

Murphy said Barron Schimberg of the Schimberg Group also added small touches to the plan, such as drilling utility line holes in the base.

Work solving the design mismatch should extend the project by three weeks, as the mayor expects to stretch the plan to open the pier in January 2020 to February 2020.

“We’re on track, and I feel real good about it,” Murphy said. “This is yesterday’s news at this point.”

The added work to resolve the conflict will cost around $100,000, with Ayres absorbing the cost, according to Murphy.

Murphy said Mason Martin began Nov. 14 to prepare to lay the ipe decking on the T-end and work was expected to continue the week of Nov. 18.

While work on the pier is progressing, negotiations with the current tenant, Mario Schoenfelder, were on hold the week of Nov. 11 as the city awaited an offer from the leaseholder.

He recently told Murphy he may not be able to meet the mayor’s Dec. 13 deadline to submit a final offer for base rent payments.

“We are not dragging our feet. Mario is asking for more time,” said the mayor, who asked commissioners if they want to extend the deadline.

Commissioner Amy Tripp said she would like Murphy to ask Schoenfelder for the reasons why he can’t make the deadline. Other commissioners agreed.

Commissioner Mark Short, who was appointed Sept. 26 to fill the seat vacated by Brian Seymour’s resignation from the commission, moved to authorize Murphy to draft an RFP if Schoenfelder doesn’t submit a final offer, or the city finds his offer unsuitable.

Commissioner Dale Woodland seconded and the commission unanimously voted for the motion.

… as commissioners sip on new liquor policy for city pier

When the new Anna Maria City Pier opens in 2020, fishers will likely bring bait or a bite to eat, especially when night fishing, but it looks as if coolers of beer will be prohibited.

Anna Maria city commissioners, meeting Nov. 14, reached consensus on the first round of talks to change the ordinance regulating the use of the city pier, including the policies on alcohol.

There also was a proposal to prohibit piergoers from carrying alcoholic drinks purchased at the T-end to the walkway, which would prevent anglers from moving along the entirety of the pier with an alcoholic beverage, Commissioner Doug Copeland noted.

City attorney Becky Vose replied that she could update the draft ordinance to allow the consumption of alcoholic beverages — still only sold by the T-end businesses — on the entire pier.

Vose also suggested allowing alcohol consumption at the pier for city-approved special events and removing a restriction limiting the sale of alcohol to beer and wine to allow the sale of liquor and spirits.

Allowing the businesses to sell a wider variety of alcoholic beverages could make the T-end buildings more appealing — and more lucrative —for the tenant.

Commissioners reached consensus to approve the suggestions that were discussed, but they still must go through amending the ordinance for the final reading, public hearing and vote.

The final hearing and vote on the ordinance was not scheduled.