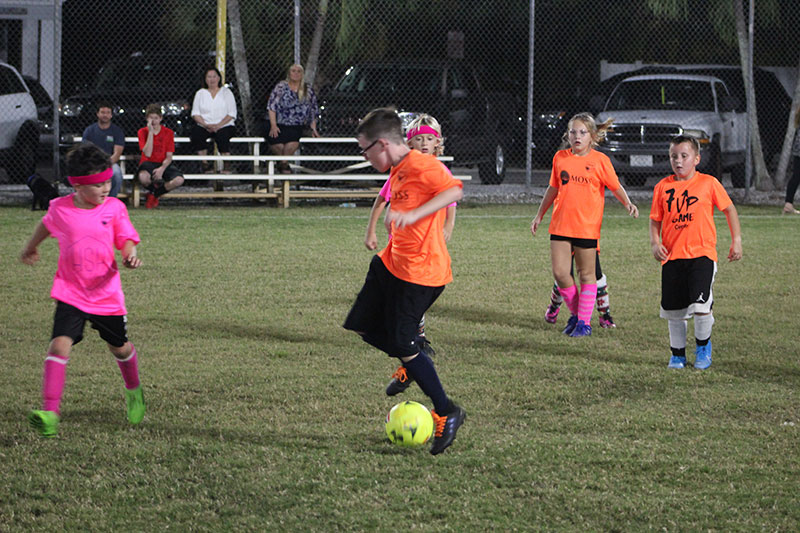 Hunter Titen appears to levitate with the soccer ball as Dylan Sato defends during a 7-up game —7-year-olds competing from the 6-7 instruction division — that preceded the championships for the soccer league at the Center of Anna Maria Island. Islander Photo: Kevin P. Cassidy 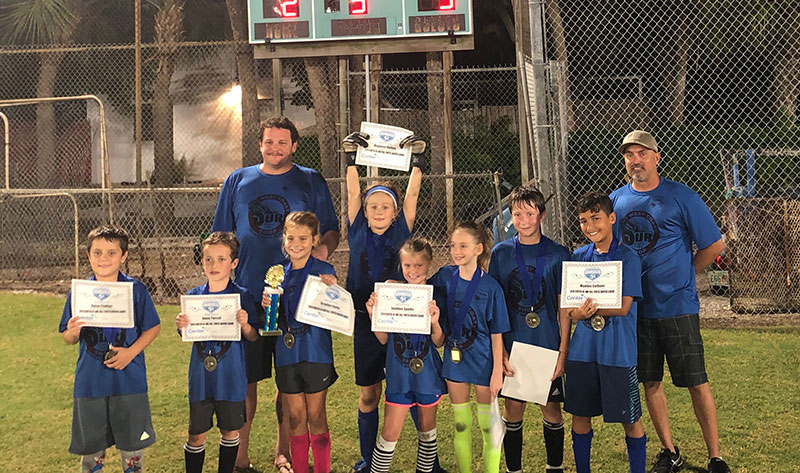 The 2019 fall youth soccer league at the Center of Anna Maria concluded Nov. 12 with two championship games preceded by the annual 7-up game — a competition for the older of the 6-7 division players to get their cleats wet on the big field for the first time.

The 7-up game saw some younger players from the 8-10 division fill out the 7-up roster for the game, which ended in a 1-1 tie for the Pink and Orange teams.

Savanna Coba notched the lone goal for the Pink 7-up squad, while Jackson Titen scored for Team Orange.

The 8-10 championship game pitted No. 3 Ugly Grouper versus the fourth-seed West Coast Surf Shop, which resulted in an unlikely champion based on regular-season action.

The teams battled to a 2-2 tie through regulation.

West Coast Surf Shop, which didn’t win a game during regular season play, came out on top thanks to a game-winning penalty kick by Dylan Phillips in a 3-2 penalty-kick shootout victory.

Maddox Culhane and Phillips scored a goal each to lead the Surf Shop, which also received 10 saves from Magness Rollins in the victory.

Nixon Conner led Ugly Grouper with a pair of goals and Jack Zaccagnino made 12 saves to help keep them in the game.

The 11-15 championship game also was a barn burner with Lancaster Design and Island Vacation Properties battling to a 4-4 tie in regulation play. The match then went to a 10-minute overtime, but the score remained tied and the game went to a second 10-minute, golden-goal overtime.

The overtime remained scoreless until, with 2:37 left, Dalton Fox notched the game-winner on an assist from Jackson Pakbaz, ending the match and a season of exciting soccer.

After six weeks of action in the adult soccer league, the standings are tight at the top, where four teams are separated by only three points. Blalock Walters is on top at 4-0-1 and 13 points with Sato Real Estate and Ross Built right on their heels at 4-2 and 12 points. Vintage Beach follows with a 3-1-1 record and 10 points. Flynn Law and MuniPlan both have nine points followed by Moss Builders with six points. Vacasa and Lancaster Designs have yet to score.

MuniPlan rolled to a 9-3 victory over Sato in the first match Nov. 13 behind five goals from Nathan Kragt and a goal and an assist from Ben Sato, Ryan Hogan, Mark Long and Zach Long.

The second match of the night saw Vintage Beach edge Moss Builders 10-7 behind three goals each from Joey Hutchinson and Zach Reda. Randy Thress added a pair of goals, while Cody Wright finished with a goal and three assists. Cole Peterson completed the scoring, and Jason Sato made 14 saves in the victory.

Flynn Law rolled to an 8-3 victory over Vacasa behind three goals each from Zachary Lieb and Murat Akay in the third match of the night. Daniel Anderson added a goal and an assist and Chris Scott scored to complete the victory.

Jessica Williams scored two goals and Eric Pullen added one to lead Vacasa, which received eight saves from Trey Horne in the loss.

The last match of the night in the adult league saw Ross Built cruise to a 7-1 victory over Lancaster Designs behind a hat trick from Damir Glavan and two goals each from Lexi Sato and Greg Ross. Kevin Roman added an assist and Connor Bystrom made 11 saves.

Yuri Pereira notched the lone goal for Lancaster Designs, which received 10 saves from Brazilian goalie Mario in the loss.

Hank Huyghe and Tim Sofran drew the bye into the finals and watched as Norm Good and Bob Palmer squeaked past Neil Hennessey and Jay Disbrow by a 21-17 score to advance to the finals.

Palmer and Good were too “good,” rolling to a 21-5 victory over Huyghe and Sofran to earn the day’s bragging rights.

The Nov. 16 games saw four teams advance from pool play with 3-0 records. The first semifinal saw Tom Farrington walk past Jerry Disbrow and Bob Heiger by a 22-17 score while  Bob Lee and Rod Bussey rolled to a 25-9 victory over Huyghe and Hennessey but Lee and Bussey stayed hot, cruising to a 21-4 victory.

Brian Comer and Joe Tynan shared individual honors with matching plus-3s. Tynan also was part of the winning team of Mike Clements, Don Grau and Dale Miller, who combined on a plus-7.

The men were back on the course Nov. 14 for a nine-hole “shamble.” The team of Ron Buck, Gerry Dahl, Jon Holcomb and Terry Tarras matched the 6-under-par 26 carded by Comer, Buddy Foy and Peter Solleveld to tie for first place.