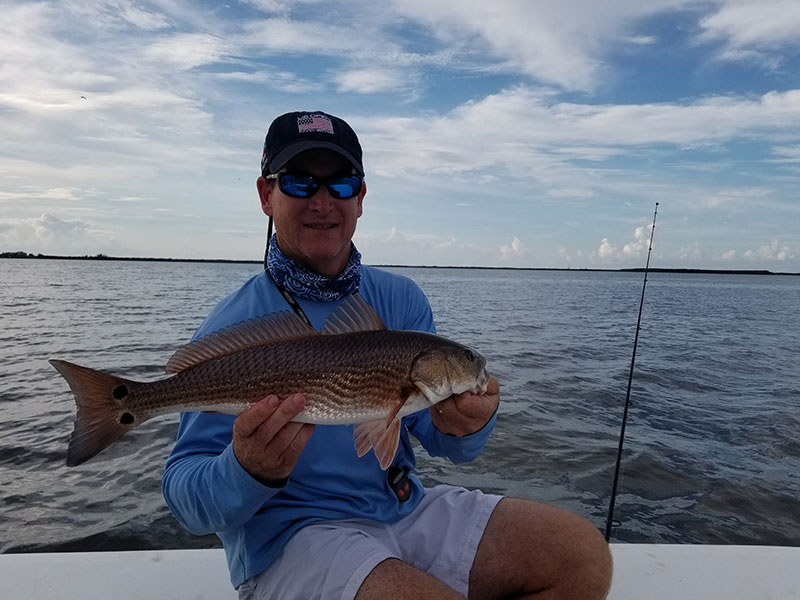 Billy Harris of Terra Ceia holds up one of several redfish caught Nov. 9, on artificial bait while fishing inshore with Capt. Warren Girle. Harris is a former partner of Capt. Girle on the Professional Redfish Tour. He recently moved back to the area and teamed up with Girle to fish for fun — and hooked up and released numerous snook and redfish.

With water temperatures dropping to the high 60s and low 70s, you may notice a change in the habits of the fish we typically target. It’s fall fishing and it’s settling in around Anna Maria Island.

Catch-and-release snook are definitely affected by these temperature changes and may not be as apt to take a bait. Your best bet for a snook hookup is to wait until later in the day when the flats have had a chance to warm up. Of course, this depends on how sunny it is and the air temp — if it warms into the high 70s-low 80s.

Targeting spotted seatrout will be much the same scenario. Although not as affected by cooler water, these fish will end up moving to deeper areas where water temps are more consistent and away from the shallow flats.

Another factor, as water temps cool is your choice of bait. Using live shiners is a great way to fish, although as cooler weather settles in, you may want to give live shrimp a shot. Snook, redfish and trout will gladly take a shrimp in cold weather. Shrimp are a slower target for these predators, as they try to conserve energy during the colder months. Plus, using shrimp as bait opens up your chances to hook more species of fish — pompano, sheepshead and black drum. You may have to contend with pinfish stealing your bait but, as we settle into winter, you will notice less of a presence of these little bait stealers.

Lastly, migratory species, such as Spanish mackerel, jack crevalle and ladyfish, thrive in the fall and provide excellent light tackle action. Artificials — silver spoons, jigs and Gotcha plugs — are proven lures to hook any of these fish. They’ll even take shrimp if you’re into live bait fishing — especially the jacks and ladyfish.

Capt. Aaron Lowman is finding good action around the artificial reefs in the Gulf of Mexico as long as the winds are light and the seas calm. Spanish mackerel are the primary target with a few kingfish, barracuda and blacktip sharks in the mix.

Moving inshore to the flats of Tampa Bay, Lowman is taking sport fishers to target catch-and-release species — snook and spotted seatrout. Both are taking live shiners as bait. While targeting the trout, Lowman’s clients are hooking into jack crevalle and ladyfish. Lastly, hooking up some inshore gag grouper in Tampa Bay is a good bet.

Capt. David White of Anna Maria Charters is finding plenty of offshore action on hard bottom and other structure. Gag grouper, mangrove snapper and yellowtail snapper are behaving nicely, readily taking live or dead bait as it reaches the bottom.

On the surface, blackfin tuna are being caught on free-lined live shiners and threadfin herring.

Moving inshore, White is starting to add live shrimp for bait as well as live shiners. As water temps drop, White is prepared to switch his target species to sheepshead, pompano and tripletail from the catch-and-release species. The snook and trout are still biting, but it’s good to be prepared for the switch.

Capt. Jason Stock is running some offshore trips on less windy days, putting clients on permit around wrecks in the Gulf of Mexico, where fish up to 35 pounds are being caught on free-lined live pass crabs. Around hard bottom and other structure, Stock also is putting anglers on a number of mangrove snapper and flounder. On windier days, He’s working inshore for keeper-size gag grouper in Tampa Bay. Catch-and-release snook also are providing action in the bay.

Jim Malfese at the Rod & Reel Pier says pier anglers using live shrimp as bait were catching an assortment of fish, including sheepshead, black drum, mangrove snapper and catch-and-release redfish before the walkway collapsed Nov. 20 and the pier closed.

The pier reopened over the weekend and anglers using a weighted rig and casting shrimp under the pier were producing the most action. Those fishers opting to use artificials — speck rigs, small jigs or silver spoons — were hooking into migratory species — mackerel, jack crevalle and blue runners.

The marine contractor made quick work of the piling repair and the fish are biting on the north end.

Capt. Warren Girle is finding good action on Spanish mackerel by working around structure in southern Tampa Bay. Free-lining live shiners combined with a longshank hook is resulting in numerous hookups on 15- to 20-inch macks. The bite is so good that multiple anglers on Girle’s boat are simultaneously reeling in macks. Mangrove snapper and gag grouper, present in the same areas, are randomly striking free-lined baits. For a more consistent bite on these bottom dwellers, Girle is switching to a knocker rig and circle hook.

Fishing the flats is productive for catch-and-release snook and spotted seatrout, which Girle says are responding to live shiners as bait despite the drop in water temps. Chumming heavily is key to getting these fish to bite.

What about Saltwater Fishing Saturday?

The Florida Fish and Wildlife Conservation Commission is offering the opportunity for anglers to go saltwater fishing Saturday, Nov. 30, without a license.

“License-free fishing days are a great way for Florida residents and visitors to get out on the water and find out why Florida is known as the Fishing Capital of the World,” read a news release from the FWC.

For more information about fishing in Florida, go online to myfwc.com.