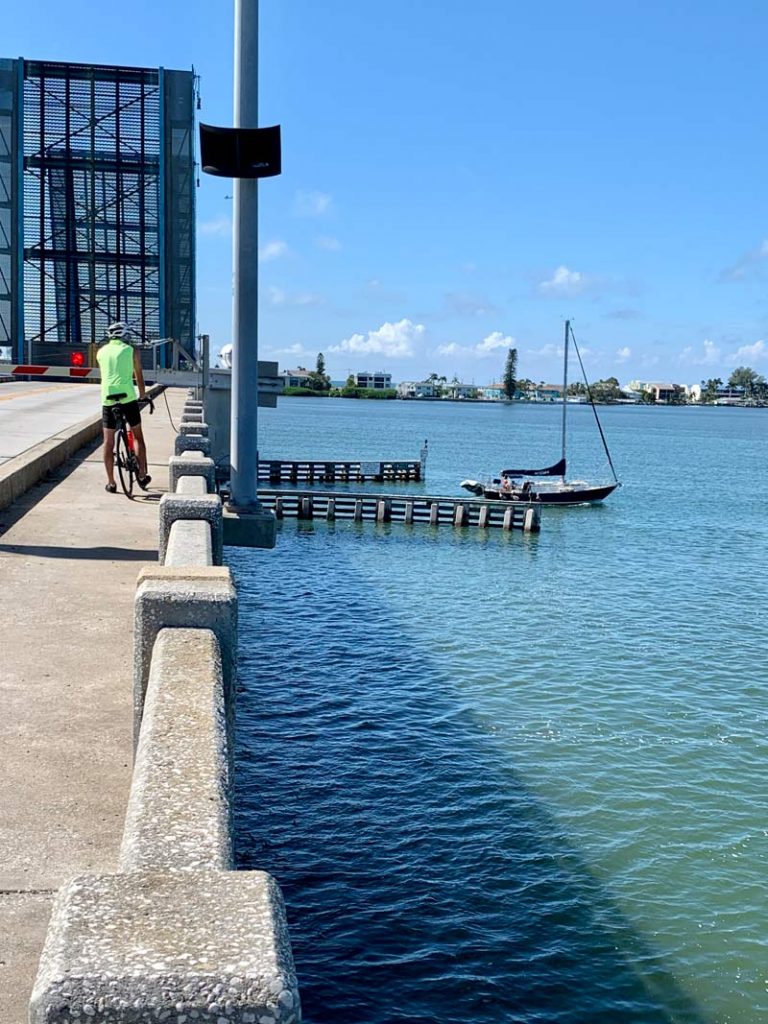 The Cortez Bridge opens on demand from boaters 15 and 45 minutes after the hour during the day. The proposed bridge would be a high fixed-span. Islander Photo: Sarah Brice

Kautz, an engineer with the Florida Department of Transportation, on Oct. 22 presented the county board with the latest findings from the two-year-long Barrier Island Transportation Study. But at the conclusion of his 5-minute presentation, the discussion soon veered to the bridge. Even if ever so subtly, at first.

“In order to keep the character of whatever’s left of the islands, why people come from all over the world and know us, we have to be careful on some of the decisions we make up here,” Commissioner Carol Whitmore said at the meeting.

“I don’t want to see the charm of Manatee change,” she said, “but at the same time I also know that you have to adjust to the future in some way.”

Then the comments turned more pointed.

Whitmore indicated other commissioners weren’t taking seriously her concerns and those of many Anna Maria Island and Cortez residents.

At issue is the DOT plan to replace the 62-year old Cortez drawbridge, which has a clearance of about 20 feet, with a 65-foot clearance fixed span. Many Cortez residents say the megabridge will destroy the character of the historic fishing village.

“I take this personally, and I don’t appreciate it being brushed off,” Whitmore said.

Countered Commissioner Betsy Benac: “Quite frankly, it’s irresponsible to say that that would be anyone’s intent on the board to in any way destroy what is happening in Cortez. ... We are dealing with so many issues. It isn’t simplistic. We can’t just say that we don’t need a higher bridge.”

Whitmore agrees the bridge must be replaced, but she favors another drawbridge, albeit higher than the current one.

Whitmore noted that she and other Cortez Bridge advocates are not opposed to a 65-foot-clearance span replacing the Anna Maria Island Bridge on Manatee Avenue, as the DOT is planning to do. There will be no right-of-way acquisition needed for that bridge, she said.

“What we’re not supportive of is the eminent domain taking away the character of Cortez,” she said. “You can’t say I’m against change. I’m against where this bridge is located and the properties you are going to affect.”

The DOT says it is planning to spend $8 million on right-of-way acquisition for the Cortez Bridge.

Whitmore, a 51-year Anna Maria Island resident who served as Holmes Beach mayor 1998-2006, is the sole commissioner on the seven-member board to oppose the high bridge.

All the three Anna Maria Island cities also have gone on record opposing the 65-foot version.

One common observation by megabridge opponents is that it wouldn’t alleviate traffic congestion much because a two-lane bridge would be replaced by another two-lane bridge.

Kautz addressed the issue in his presentation.

“It would be a lot more effective with a flexible third lane on the bridge, which we suggest,” he said.

Some commissioners were happy to hear that.

“This board asked for that, and we were told by DOT that that was not a possibility,” Benac said. “So now I hear DOT say that makes some sense. So we are making progress.”

The DOT launched BITS early in 2017 at the request of the Sarasota/Manatee Metropolitan Planning Organization. The MPO includes a 17-member board of elected officials and a professional planning staff.

The DOT unveiled a list of recommendations Sept. 27 in the third and final phase of the study and has been presenting it to local governments since then. The agency will formally present the plan Nov. 18 to the MPO.

Phase 1 of the $675,000 study examined prior studies, and Phase 2 listed potential improvements and recommendations.

Kautz summarized the intent of BITS: “How many people does a solution affect? How much time does that save them? And can we cut down on the amount they have to drive around or get around the island to do what they need to do to enjoy the community.”

Whitmore pointed out the difficulties because AMI cities don’t want to widen roads or have paid parking.

It may just have to boil down to attitude, she said.

“When you’re coming out there to have the island experience, you have to take a chill pill,” she said.