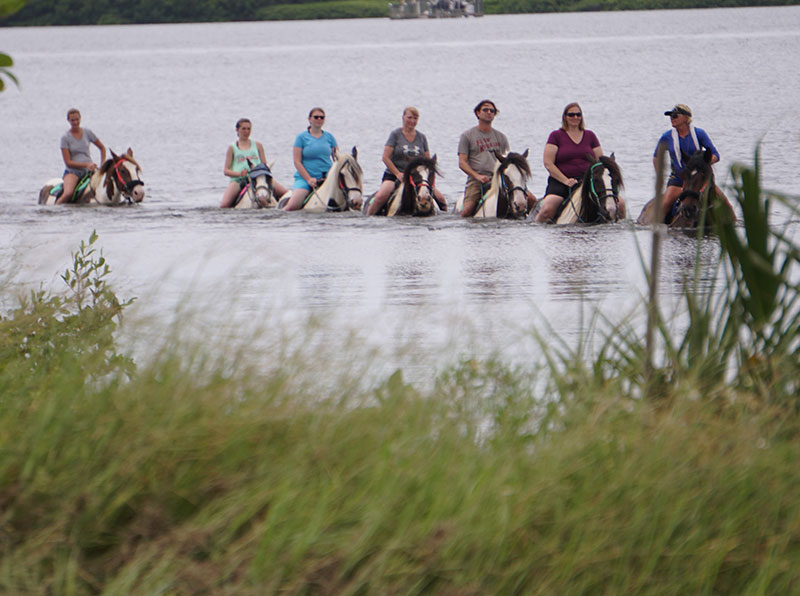 A tour on horseback takes riders through the waters on the north side of the Palma Sola Causeway. Islander File Photo: Kathy Prucnell

“We don’t have a problem with regulation, but, of course, we don’t want the horses banned.”

Carmen Hanson, who owns Cponies, a horseback-riding business that operates tours in Palma Sola Bay on the north side of Manatee Avenue, said blaming the bay’s environmental problems on horses is misguided.

Manatee County commissioners voted unanimously Nov. 7 to direct their attorney and staff to research and report about options to regulate horseback riding in sensitive waters.

In supporting the directive, commissioners pointed to seagrass loss and recent no-swim advisories in the bay.

In business for eight years, Hanson disputes that horses are responsible for the fecal matter in the water or that their presence leads to the advisories.

She said the horses aren’t treading on the seagrass beds, where it’s “soft and mucky.”

In addition, she and her 10 employees collect and remove any feces, place it in a muck bucket and dispose of it at their Myakka City farm.

“I’ve done research for the past five years and every time there’s been a no-swim advisory, there’s been sewage-line breaks and spills from sewers,” Hanson said, adding she’s in the process of compiling the data and a graph for public review.

With regulation, Manatee County would follow Pinellas County, which, in October, approved a measure prohibiting horseback riding, walking and training in Tampa Bay, as well as seagrass damages in the county’s preserves.

“They can do it, why can’t we do it?” asked Commissioner Betsy Benac during the Nov. 7 meeting.

Benac suggested county staff reach out to the Florida Department of Environmental Protection.

Commissioner Vanessa Baugh agreed: “I think it’s very important to do this because grasses are being trampled on.”

Seagrass helps with the health of the bay and water clarity and feeds the manatees, Baugh said.

Baugh blamed the horseback riding for the seagrass being “almost gone.”

The Florida Department of Health issued no-swim advisories for exceeding EPA guidelines for fecal matter in the bay in July, August and October. The advisories were lifted about a week after testing showed a return to safe swimming standards.

Baugh said, “It’s just a mess,” but acknowledged the DOH’s testing can’t tease out whether it’s due to human or animal waste.

Commissioner Priscilla Trace said there is no proof the problems are caused by the horses.

The most recent reported sewage spill at Palma Sola Bay was Aug. 19, when 180,000 gallons of treated wastewater spilled into a storm drain on 59th Street West that flows south to Palma Sola Bay, according to Manatee County Utilities spokeswoman Amy Pilson. An unknown portion of the spill eventually made its way to the bay.

Other reported spills occurred December 2017-February 2018, when contractors hit sewer lines and more than 6 million gallons of raw sewage spewed through the adjacent lands, some that emptied in the bay.

Commissioner Carol Whitmore agreed the health of Palma Sola Bay and the beach closings are problems, but noted that people historically have brought horses to recreate in the bay. People also are allowed to bring dogs to the causeway.

Whitmore brought the Palma Sola Bay health issue to the Manatee County Council of Governments in July, where Bradenton Councilman Gene Gallo said the city looked into the possible regulation of horses, but the Florida Department of Transportation nixed the idea with a 2012 letter stating horses are permissible in DOT rights of way as a mode of transportation.

At the Nov. 7 meeting, county attorney Mitchell Palmer dismissed the DOT’s opinion, saying, “There’s little doubt in my mind” the county can regulate for water quality.

15 thoughts on “County trots out ban on horseback surfing”