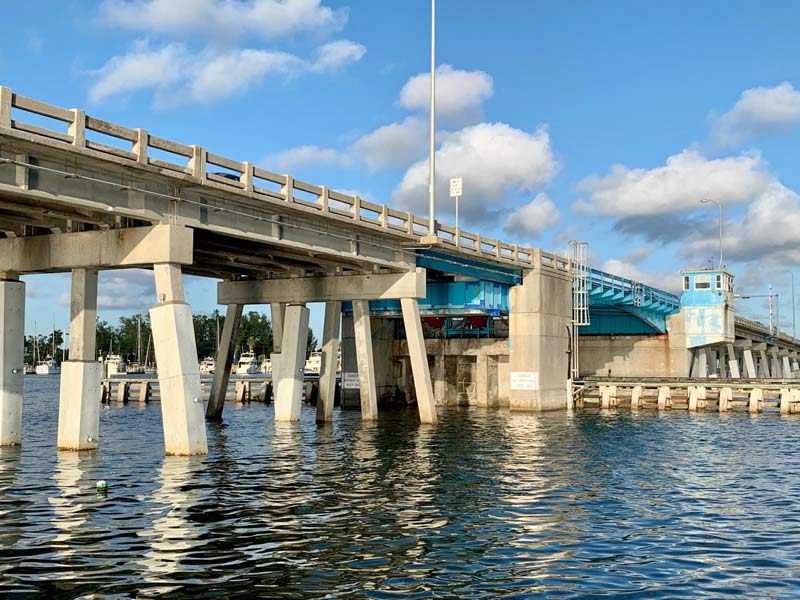 The Cortez Bridge opens in September for boat traffic on the Intracoastal Waterway with the Seafood Shack restaurant and marina in the distance. Islander Photo: Arthur Brice

Round one goes to the Florida Department of Transportation.

The DOT has dismissed a legal challenge to the agency’s plan to replace the Cortez Bridge with a 65-foot-clearance fixed span.

“It was expected,” said former County Commissioner Joe McClash, who filed the challenge.

McClash’s request in October for a formal administrative hearing contained 25 instances in which he says the DOT acted wrongly.

In an “order of dismissal without prejudice” issued Nov. 13, the DOT said the matter is under federal jurisdiction, not state.

McClash said Nov. 22 that he had filed an amended petition in which he argues that the state also has jurisdiction.

The DOT announced Oct. 10 it had approved a yearslong project development and environment study and was going ahead with design work for the 65-foot-clearance fixed bridge.

The transportation agency made a brief statement when McClash filed his legal petition last month.

The DOT appears to be trying to shore up support in Cortez for the megabridge, which some residents strongly oppose.

District 1 Secretary LK Nandam, based in Bartow, held a private meeting with Cortez businessman John Banyas at his Swordfish Grill and Tiki Bar Nov. 15. An Islander reporter was told he could not attend.

Nandam declined to comment on the meeting when asked in person Nov. 18, but Banyas said in a Nov. 20 telephone interview the bridge was discussed.

“I could go either way, but I think the taller bridge makes sense,” he said.

Cortez businesswoman Karen Bell, a leader in the local seafood industry, has publicly expressed her support for a high bridge.

McClash, who served on the county commission from 1990 to 2012, is joined in his quest for the administrative hearing by three organizations and three Cortez residents, including another former county commissioner.

“This is a signal to the DOT to do the right thing,” McClash said last month. “It is intended to give them a taste of what’s coming.”

In addition to the megabridge, the DOT also considered in the study making repairs to the 62-year-old drawbridge or replacing it with a 35-foot-clearance drawbridge.

The current drawbridge, with a clearance height of about 17 feet, had major repairs done in 1996, 2010 and 2015 and the DOT says it has outlived its lifespan.

Opponents of the high bridge say it would change the character of the fishing village of Cortez, designated a historic district in 1995. Many residents have been fighting the megabridge since the DOT revealed a plan for it in 1989.

“The DOT had a number of bridges they were trying to drop down everyone’s throats in the 1980s and ’90s,” McClash said last month.

McClash and many others don’t oppose replacing the bridge, they just don’t want a megabridge.

Joe Kane, one of the petitioners in the legal challenge, has lived in Cortez for more than two decades.

The Anna Maria Island Bridge on Manatee Avenue, a second drawbridge connecting the island to the mainland built the same year, also is slated to be replaced by a 65-foot-clearance fixed span. Its design schedule is further along than the Cortez Bridge because the DOT approved it first.

Others are the environmental group ManaSota-88 and two other nonprofits, the Florida Institute for Saltwater Heritage and Cortez Village Historical Society.

The Sarasota/Manatee Metropolitan Planning Organization is not part of the challenge, which executive director David Hutchinson called “a procedural matter.”