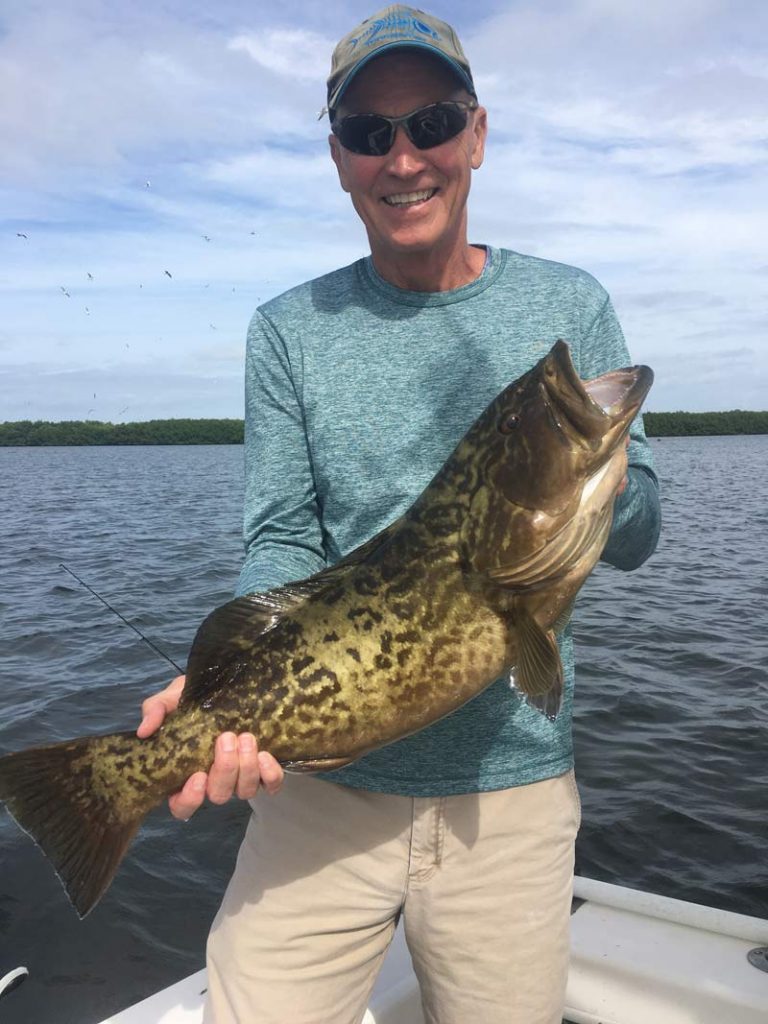 Chip Legassey of Harbour Isles shows off his catch, a gag grouper, caught in 3 feet of water while targeting spotted seatrout. Legassey was guided to the fish by Capt. Danny 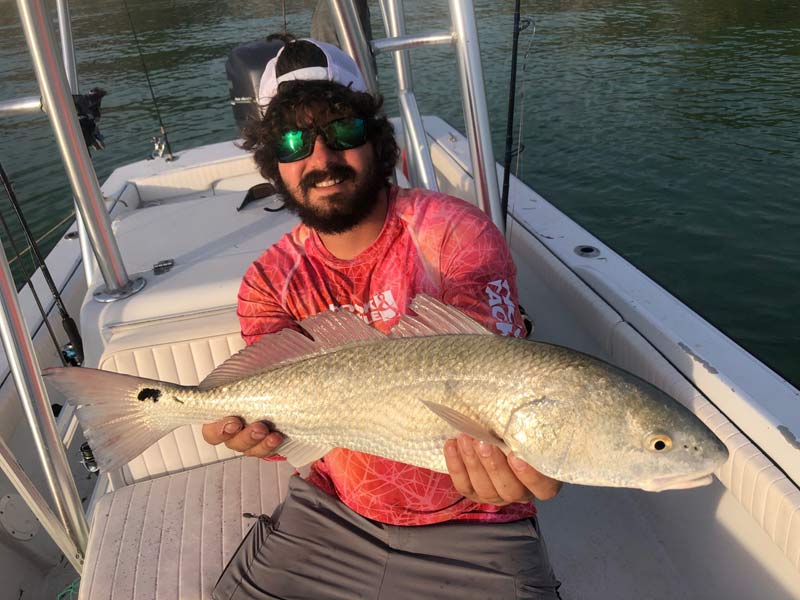 Billy Herme- nau of Braden- ton, chef at the Waterfront Restaurant in Anna Maria, shows off a nice redfish caught on a live pilchard Nov. 4 on a charter fishing trip with Capt. David White of Anna Maria Charters.

Anglers around Anna Maria Island are enjoying a variety of inshore and offshore fishing, as well as cooler weather.

While fishing inshore, the lush grass flats that are present in our waters offer some great action on the top trio of catch-and-release species — snook, redfish and spotted seatrout. Live shiners are in abundance, which is triggering these species to inhabit the flats, where they gorge themselves in preparation for winter.

Migratory species — Spanish mackerel, jack crevalle and ladyfish — are following suit. These predators can be found on the flats, but more consistently in slightly deeper water in Tampa Bay.

Targeting structure is especially smart when looking for mackerel. And, speaking of structure, don’t hesitate to try bottom fishing for mangrove snapper, still lurking in Tampa Bay, waiting to be caught before the water temps really drop.

Moving offshore, yellowtail and mangrove snapper are being caught with regularity. You can also expect to find red grouper. Migratory fish — kingfish and cobia — are turning up at offshore wrecks and reefs.

On my Southernaire charters, I’ve been concentrating on the catch-and-release trio on the flats. Numerous windy days and choppy water kept me near shore but, luckily, the backwater bite is going strong.

On the calmer days, I’m getting out in the Gulf of Mexico over the artificial reefs to target Spanish mackerel and blacktip sharks. Both are proving to be accommodating for my clients.

Capt. Aaron Lowman is targeting migratory species such as Spanish mackerel, blacktip sharks and barracuda while working the artificial reefs in the Gulf of Mexico. Live shiners free-lined on a long shank hook are being devoured within seconds of hitting the water by ravenous mackerel. The sharks and barracudas are after the macks — so reel quickly if you don’t want to lose your mack to a predator.

Inshore, catch-and-release reds are being caught while targeting snook.

Moving inshore, catch-and-release snook and redfish are providing great action on light spinning gear. Free-lining live shiners or adding a cork to the rig is yielding results. For those inshore fishers looking to bring home dinner, macks, mangrove snapper and black drum are on the menu.

Jim Malfese at the Rod & Reel Pier says mackerel action is heating up as the water temps fall. Pier fishers casting speck rigs, jigs or silver spoons are finding plenty of action on these high-speed fish. Mixed in with the macks are jack crevalle, ladyfish, blue runners and bluefish. Anglers opting to use live bait are having good results on live shrimp.

Capt. Warren Girle is having luck with catch-and-release snook and redfish. Casting free-lined live shiners against mangrove shorelines is resulting in catches of both species. Most snook are 20-26 inches while the reds are coming in slightly larger, at 28-32 inches.

Fishing structure in Tampa Bay is producing action for Girle’s clients. Mangrove snapper, juvenile grouper and macks are rounding out the bite for his clients.

Capt. Jason Stock is finding excellent action on some offshore catch-and-release species. Big amberjack are quite abundant and are more than ample to bend the rod, even on the stoutest spinning gear. Casting top-water plugs or free-lining live baits over wrecks and other structure is yielding a bite.

American red snapper are another catch-and-release species that put up quite a battle.

Other anglers, looking for something to take home for dinner, are being rewarded with blackfin tuna on Stock’s charters. Almaco jacks and kingfish are making a good presence, too. While targeting these fish, it is advantageous to reel in quickly, as Stock notes there are large schools of sharks and barracuda in wait.

Lastly, goliath grouper are being brought up from the depths for a trophy photo before a quick release.