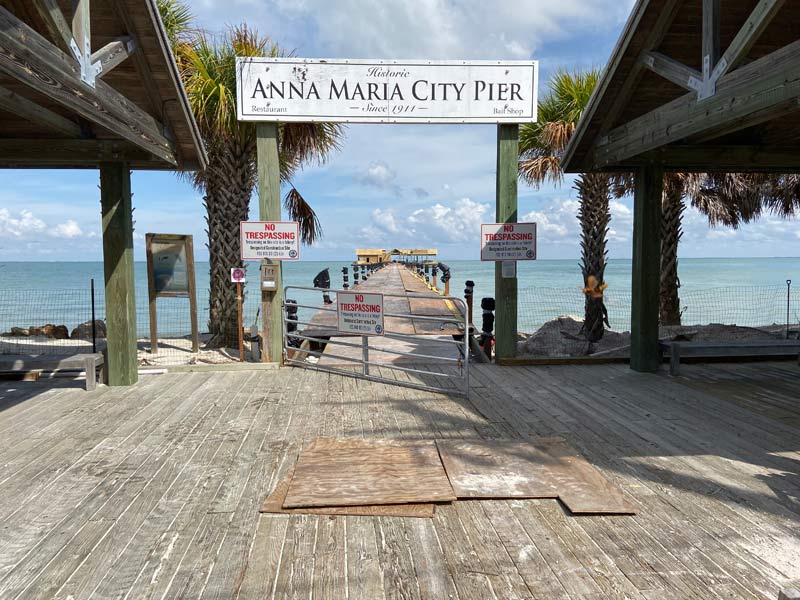 Mason Martin Builders employees work Oct. 29 to construct the shells of the restaurant and bait shop at the T-end of the new Anna Maria City Pier. Islander Photo: Ryan Paice

Some modifications are in store for the new Anna Maria City Pier.

Anna Maria Mayor Dan Murphy told The Islander in a Nov. 1 interview that he met Oct. 31 with members of Ayres Engineering, the Schimberg Group, Frank Agnelli from Mason Martin Builders and building official Luke Curtis to discuss a design conflict between the architecture and engineering.

Murphy said the pier was angled so stormwater drains from the T-end, but the architects from the Schimberg Group designed the restaurant and bait shop for a level surface.

He said the experts met to identify and discuss possible solutions, including leveling out areas of the pier by pouring additional concrete, drilling holes in the concrete platform under the ipe decking and adjusting doorway headers for the buildings.

“It’s not a big deal, but it takes some time to solve it,” Murphy said. “I don’t want this thing to have to be redone, so for me, it’s a big deal because I want to make sure we get everything we paid for.”

Murphy said the building official would review any proposed changes to ensure they meet city code.

One meeting wasn’t enough, however, and the sides planned to meet again the week of Nov. 4 to establish costs for the modifications.

Murphy said Mason Martin would handle the modifications, but the engineer and/or architect will pay the costs since the conflict was between the two.

The mayor added that the opening of the pier — expected to be in late-January or early-February 2020 — may be pushed back due, but he wouldn’t know for sure until the second meeting.

Meanwhile, construction on the shells of the T-end buildings progressed the week of Oct. 28, even though modifications will be required.

“It’s moving right along,” Murphy said. “It’s not like all of a sudden everyone is gone and work stops.”