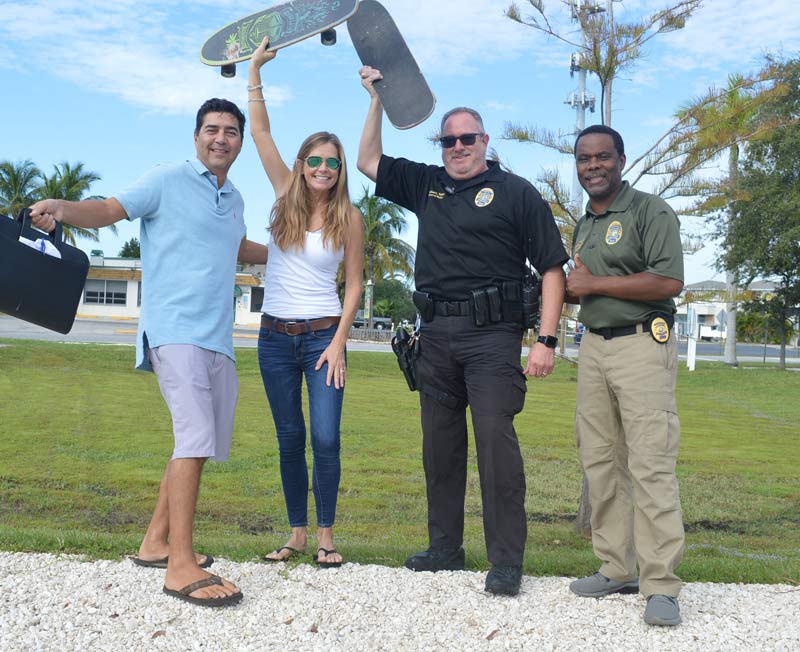 “Holmes Beach reached its goal to fund the bowl!” Mayor Judy Titsworth said Nov. 8, regarding a last-minute push for donors to build a skate bowl.

The skate bowl and a new skate park are in the works for the city field recreation area adjacent to city hall, 5801 Marina Drive.

The commission approved the skate park in February, at a cost not to exceed $150,000 and with an option to include the skate bowl if $100,000 could be raised from grants or donations.

Holmes Beach Police Chief Bill Tokajer and others with the city kicked off a fundraiser as the Nov. 8 deadline approached to raise $100,000 for the bowl.

With about 40 donations, ranging from cash to construction materials to giveaways for donors, the community met the goal to fund the bowl just in time.

“It was an amazing response from the community — as soon as we put it out there that we were looking for funds, people started calling and wanting to donate,” Tokajer said.

The city had been seeking funds for the bowl for about eight months, but the big push came the week of Nov. 4.

“It makes me happy that the community is coming together for such an instrumental park for the kids,” the chief said.

Former Commissioner David Zaccagnino — parent to potential young skaters — said Nov. 8 that the bowl is integral to the skate park.

“A good way to understand it is that it would be like having a playground without a slide,” he said. “You need to have that bowl component.”

The Y-shaped skate bowl — called a concrete wave in the surfing culture — will resemble a custom-built swimming pool, about 4 feet deep, but, at 800 square feet, bigger than the average family pool.

Tokajer said people have remarked that they miss the skate park since it closed to make way for park construction in 2017, but the new park will exceed the amenities of the old one.

“We get people all the time that say they brought their kids here on vacation because they heard about the skate park and miss the old one,” the chief said. “Our old skate park was nothing compared with this new, state-of-the-art park.”

Titsworth said she was “stoked” to see the enthusiasm of the community to support the skate bowl.

“We all need to give ourselves a pat on the back,” she said, adding that she hasn’t seen the community so excited in a long time.