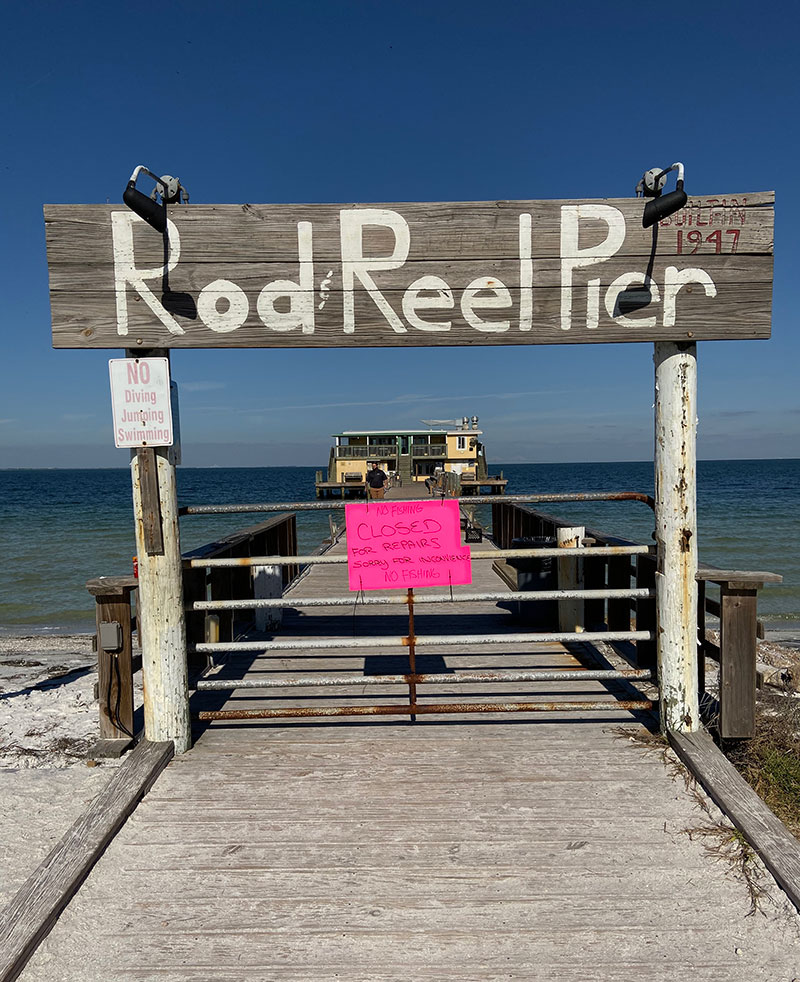 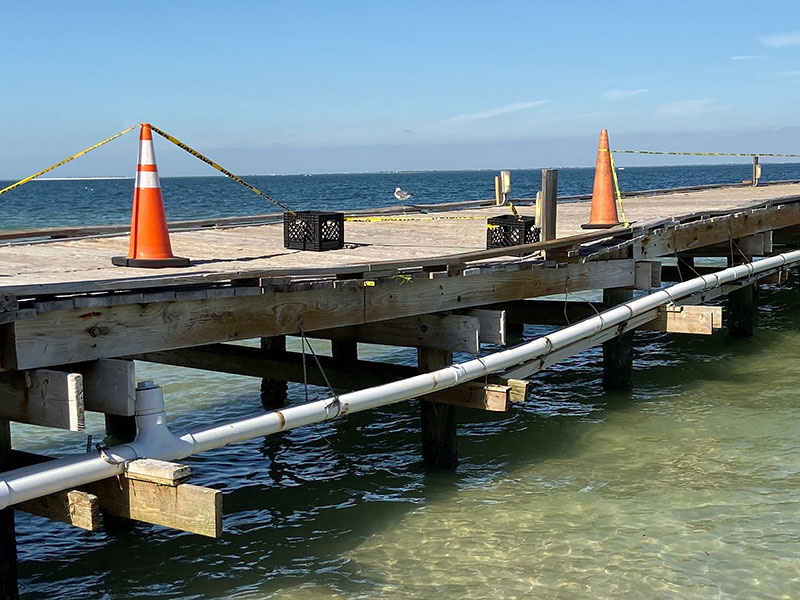 A view of the Rod & Reel Pier’s damaged walkway Nov. 21. The pier was closed after a failed piling led to further damage.

Anglers didn’t have to wait long for the return of a prime fishing spot in Anna Maria.

And the grill was barely cool.

A sinking piling led to the partial collapse of the walkway, prompting the Nov. 20 closure of the 72-year-old pier, restaurant and fishing operation, according to Dave Cochran, the pier’s general manager.

Former Commissioner Doug Copeland, who strolled from his home to the Rod & Reel Nov. 21 to look at the damage, expressed hope repairs would wrap up quickly.

“I hope they can get it repaired and open as soon as possible,” he said.

Cochran said pier employees had alerted to the problems with the walkway — on the south side of the structure around 20-30 feet from land — and plans were made to address the issue in December.

However, the walkway began to soften and collapse Nov. 20.

The entrance was cordoned off for safety by pier staff, and a deputy from the Manatee County Sheriff’s Office-Anna Maria substation was posted in the parking lot Nov. 20 to keep people off the structure.

Cochran said the pier requires frequent repairs, but he couldn’t remember the last work on the structure.

He also said the pier is inspected annually, but an inspector hadn’t been brought out to investigate the failed piling before its repair.

“It happens,” Cochran said. “It’s something that needed to be attended to and we’re attending to it.”

The pier’s temporary closure marked the first time the structure required major repair since a fire caused extensive damage in 2014. The fire put the pier and its employees out of commission for four months.

This issue was solved in a matter of days.

Mayor Dan Murphy wrote in a Nov. 21 email to The Islander that piers are subject to the toll of saltwater and tides, which can lead to unsafe conditions.

“All structures on, over and near open water, similar to the city pier which was destroyed by Hurricane Irma, require constant maintenance,” he wrote.

The Rod & Reel is owned by Mario Schoenfelder, who also is the current tenant of the Anna Maria City Pier. With the R&R closed and a new city pier under construction, north-end anglers found themselves without a pier to cast from and no place nearby to purchase bait.

Diners also were turned away during the closure at a time of year when the normal breakfast, lunch and dinner business at the pier is typically brisk.

Restaurant employees and the bait shop staff were sent home.

Murphy said the city was not involved with the repairs for the privately-owned Rod & Reel, other than to issue the required permits and inspect the work after completion.

However, he commended the R&R’s handling of the issue.

“The city’s primary concern is public safety,” Murphy wrote. “We are pleased that the Rod & Reel took it upon themselves to close their pier once they recognized the danger.”

All is well that ends well, one pier worker was overheard saying.