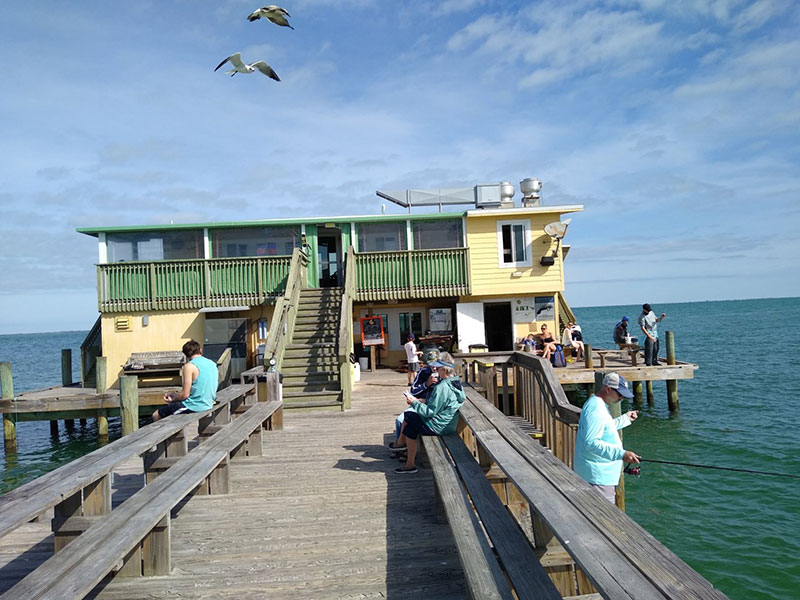 This was the case the week of Nov. 18. But only for a short time.

The Rod & Reel Pier — a 72-year-old pier, restaurant and bait shop at 875 N. Shore Drive, Anna Maria — was closed Nov. 20 after a sinking piling led to the partial collapse of the walkway, according to Dave Cochran, the pier’s general manager.

To the south, the Anna Maria City Pier remained closed, under construction after the 1911-built pier’s demolition following Hurricane Irma.

Rod & Reel employees had noticed problems with the pier walkway on the south side of the structure and plans were in the works to address the issue this month.

But one section of the walkway had its own plan. It began to soften and sink below the other planks.

Holmes Beach contractor James G. Annis began work Nov. 22 and completed the pier repair that day. The walkway then passed inspection by the city of Anna Maria, allowing the pier to reopen Nov. 23.

By all accounts, visitors and locals alike were glad to be able to return to the Rod & Reel Pier.

Peter Diamond took his son Sammy, 7, fishing at the Rod & Reel Pier Nov. 26. The family had arrived from Boston the night of Nov. 25.

“Anna Maria is pretty cool. My wife woke up this morning and said, ‘We’re right near the ocean!’” Diamond said, referring to the Gulf of Mexico.

They were slated to enjoy a half-day charter fishing trip Nov. 27 aboard the Fishy Business with Capt. Rick Gross.

“My son’s been talking about it for a month,” said Peter Diamond.

Mark Emanuele and his son Tyson, 6, who were visiting from Chicago, tested the waters of Tampa Bay Nov. 26 off the Rod & Reel.

“It’s our first year here, but my family’s been coming here for a long time,” said Emanuele, who was glad the pier reopened so they could fish.

The father and son had no luck with frozen shrimp but were confident a tactical decision would change their luck for the better.

“We’ll be back with live shrimp!” the dad said.

The Rod & Reel is owned by Mario Schoenfelder, who also is the current leaseholder for the Anna Maria City Pier, which is tentatively slated to open in February 2020.