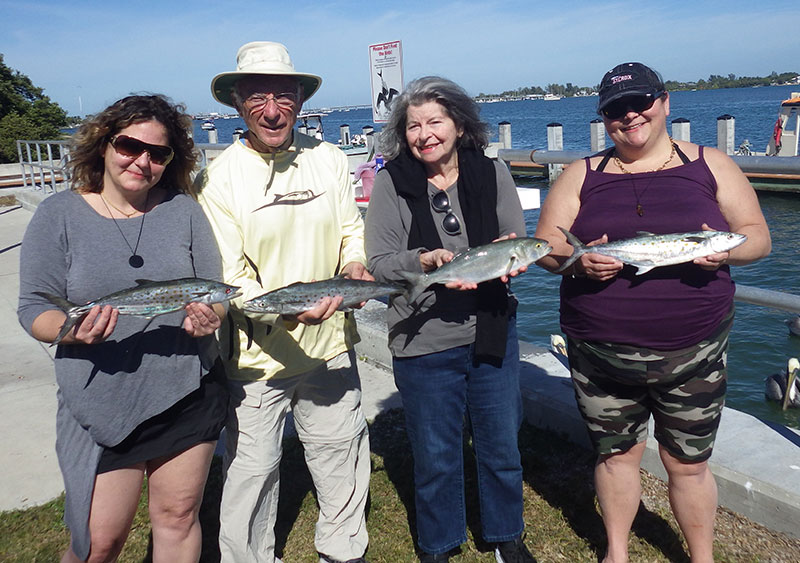 Nicole Albashi, left, Gus Swoboda, Julie Brogan and Andrea Swoboda show off their Dec. 9 catch from a nearshore fishing trip. They each caught several mackerel using shiners for bait, keeping some for dinner. Brogan is holding a small bluefish. They also hooked up lots of small sharks that they released. Albashi and Andrea Swoboda came from Wisconsin to visit Gus, their dad, who lives on Longboat Key, and his friend, Brogan. The group was guided by Capt. Warren Girle. 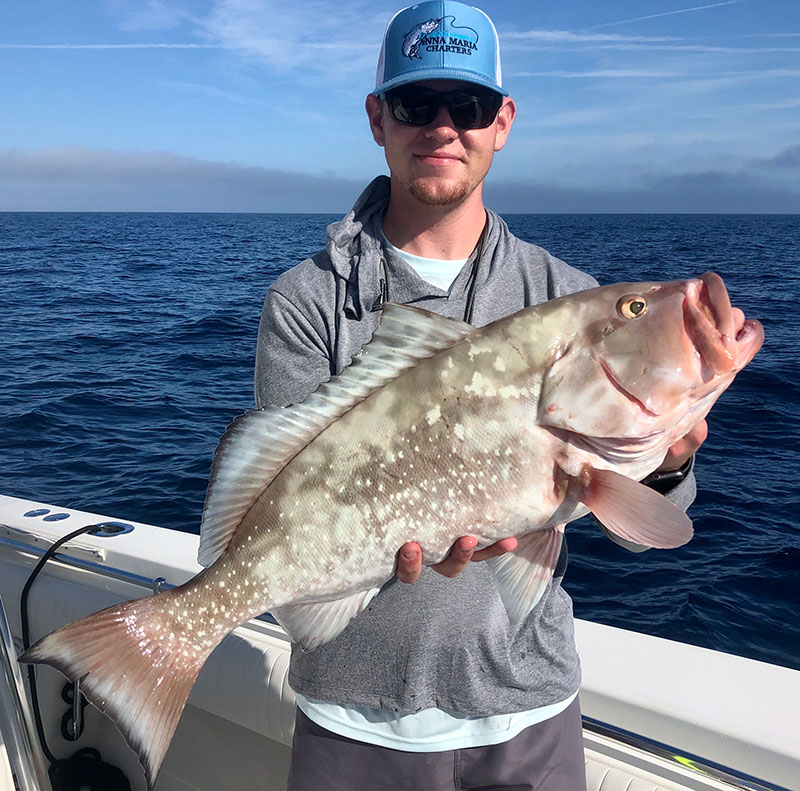 Brandt Sjuts, visiting the area from Central Illinois, shows off a nice red grouper he caught Dec. 11 while fishing with his older brother, fishing guide Capt. David White. Sjuts caught the grouper on a live pinfish in 100 feet of water.

Fishing around Anna Maria Island has a lot to offer in the winter.

We’re seeing days that start with temps in the 50s and end in the 80s and that’s good weather.

You might say, “Oh, the weather is beautiful.” While that’s true, it sure goofs up the patterns of the fish we target.

On those colder days, you’ll want to concentrate on docks and structure in Tampa Bay or the Gulf of Mexico. Live shrimp as bait will work nicely. A good expectation is to hook into some catch-and-release redfish and keeper black drum, pompano and sheepshead while fishing the docks. On the reefs you might hook into mangrove snapper, hogfish or juvenile grouper.

On the warmer days, especially during the afternoon tides, you should be able to fish the flats for catch-and-release snook. But this depends on if you can find some shiners for bait. Catch-and-release spotted seatrout should react positively to warmer water temps in the same fashion. Also, during these early winter months, it pays to be versatile.

Capt. Aaron Lowman is running his charters to nearshore ledges and hard bottom in the Gulf of Mexico. Using live shrimp on a knocker rig is resulting in a variety of fish — hogfish, mangrove snapper, porgies, sheepshead and Key West grunts.

Moving toward the beaches of Anna Maria Island, Lowman is finding plenty of Spanish mackerel around the artificial reefs. In the passes around sandbars, Lowman is putting clients on pompano, whiting and black drum.

Lastly, dock fishing on the colder days is producing some sheepshead and catch-and-release redfish for Lowman’s clients.

And it doesn’t hurt to fish out of the wind in the canals.

Capt. David White of Anna Maria Charters is working offshore with good results for his anglers on red grouper. Limits of these tasty fish are being caught quickly while bottom fishing. Migratory fish — blackfin tuna, bonito and a handful of king mackerel — are making a showing for White, who is free-lining large baits to put clients on a hookup.

Capt. Jason Stock, on the other hand, is finding good action offshore on blackfin tuna and kingfish. Chumming with live bait has been the ticket to really get them going. Once chummed up, Stock has clients throwing top-water plugs and getting results. Amberjack are showing in good numbers offshore. Again, lots of chum is getting them fired up.

Jim Malfese at the Rod & Reel Pier says fishers using live shrimp are hooking into some early winter sheepshead, black drum and a few catch-and-release redfish. Casting spoons or jigs out from the pier is yielding a bite from macks and ladyfish, but a little work is required. Malfese says determination and a lot of casting will get you a mack.

Lastly, a few catch-and-release snook are being hooked up at the R&R, mainly at night, by anglers using large pinfish or small ladyfish as bait.

Capt. Warren Girle is working structure in Tampa Bay, where, with the recent warm up, live shiners are still available as bait. The effort is resulting in some great Spanish mackerel fishing. While targeting the macks, Girle’s clients also are hooking into mangrove snapper and juvenile gag grouper.

Moving inshore to the flats of Tampa Bay, Girle is getting cooperation from the top trio of catch-and-release species — snook, redfish and spotted seatrout.