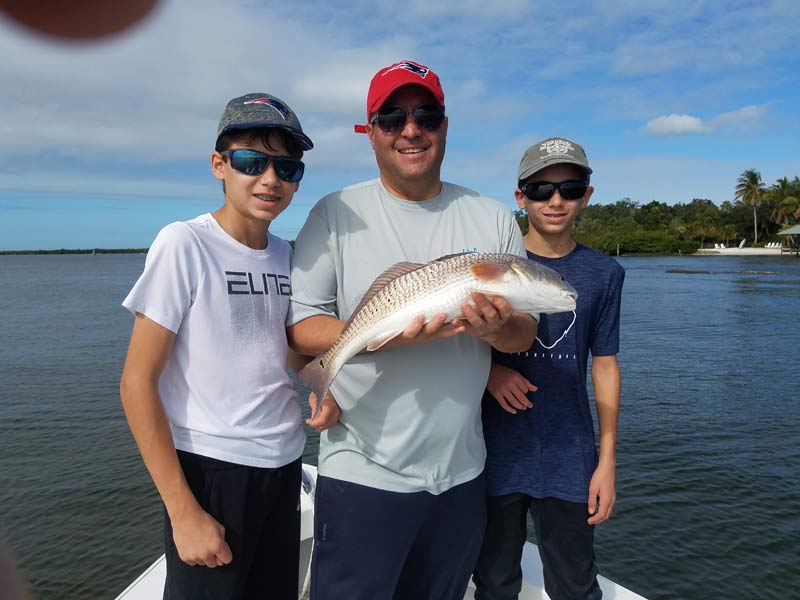 The Stephen twins, Drew, 14, left, and Jack, right, of Manchester, New Hampshire, pose for a quick photo Dec. 25 with their redfish and Dad, Rob Stephen, before releasing the fish. The trio, while dining outdoors with family at Paradise Bagel Cafe Dec. 27, told The Islander they enjoyed their Christmas charter, which included some keeper fish for dinner at grandfather’s island home. 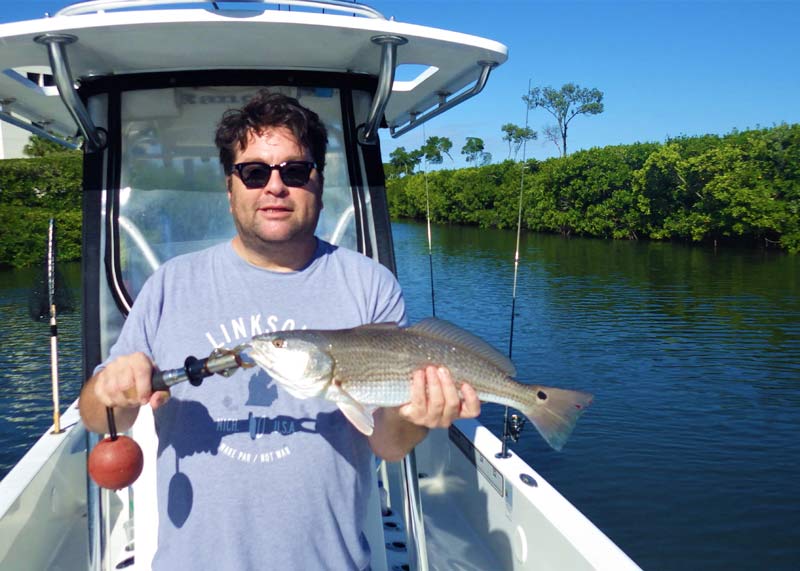 Jon Klein, visiting family on Longboat Key from California for the holidays, fished inshore Dec. 23 for catch-and-release redfish and snook and found success with shrimp as bait with Capt. Warren Girle.

This type of fishing requires a little homework and trial and error, but it sure beats fishing in windy, choppy conditions. And, you’ll find it can be productive.

A variety of species will frequent these areas during the winter. The usual suspects — fish that enjoy being around structure — include redfish, snook, sheepshead, flounder, black drum and small snappers and groupers. Other species you may encounter are jack crevalle, bluefish, spotted seatrout and ladyfish. That’s not a bad line up for the canals. You may not catch all of these in one day, but it is possible.

As for bait, I like live shrimp. Every species listed will eat these tasty morsels. And, if shrimp aren’t available, don’t hesitate to cast some artificials. Soft plastics on a jig head work wonders when canal fishing. And the scented ones, such as Berkley Gulp, can be downright deadly.

So, now that you know there are fish in the canals, it may help to know why. There is method to this madness. During the winter months, when water temps drop, most fish we target are in search of warmer water. Canals provide such a refuge. Lined on either side with concrete seawalls, canals keep the waters calm and slightly warmer than open waters. When the sun beats down during the day, the walls warm up and heat the water. Even if only slightly, it seems to do the trick.

Also, many canals have dark, muddy bottoms, which help absorb heat from the sun, further raising the water temps.

Lastly, the seawalls and dock pilings that over time become encrusted with oysters and barnacles provide an abundant food source for small fish, which attract larger predators.

So next time you’re staring at the boat, debating whether to fish in the strong wind, have no fear. Jump in and explore the canals on Anna Maria Island, bait some shrimp and see what you turn up.

On my Southernaire charters, I’m hiding from the wind. Catch-and-release redfish are dominating the bite at most docks. Mixed in are some keeper sheepshead and mangrove snapper. Live shrimp on a 1/2-ounce knocker rig is working nicely in these areas. The shrimp are drawing reactions from black drum, flounder and ladyfish, too.

Moving into the Gulf of Mexico on calmer days is yielding good action on bonnethead sharks, whiting, ladyfish and a few pompano. The bite is occurring close to shore, so calm waters are a must.

On a conservation note, during its December meeting, the Florida Fish and Wildlife Conservation Commission changed the rules effective Feb. 1, for spotted seatrout. Although the new bag limits are in effect, it does not remove the closure due to red tide in southwest Florida. In our area, when seatrout harvest opens May 31, anglers will be allowed a daily bag limit of three spotted seatrout and the slot limit will be 15-19 inches. Also, a fisher may keep only one fish of three over the slot.

Moving into the passes to the north and south of Anna Maria Island, pompano are being caught on casts of shrimp-tipped jigs. Lowman is finding the pompano while targeting catch-and-release spotted seatrout over the deep grass flats. In these areas, soft plastics combined with a jig head work well.

Capt. David White of Anna Maria Charters is working offshore during the calmer days and red grouper and catch-and-release amberjack are providing action for his clients. White says some of the amberjack are in the 100-pound range, and live sardines and pinfish are working well for the AJs. As for the red grouper, White says frozen sardines work just fine. While targeting amberjack, White’s clients are enjoying the hookups with some blackfin tuna.

Moving inshore, White is finding sheepshead, black drum, catch-and-release redfish and some pompano are taking live shrimp as bait for his clients.

Capt. Jason Stock is fishing offshore on days when the weather cooperates. He says targeting kingfish around wrecks and reefs is quite good, as limits of these fish are available. Bottom fishing around structure is good for mangrove snapper as well as keeper-size gag grouper. Amberjacks are present around structure for some great catch-and-release action.

Capt. Warren Girle is working a good inshore bite. Casting live shrimp under docks and along seawalls is yielding his anglers a variety of species, most notably black drum, sheepshead and catch-and-release redfish. While fishing the docks, the reds are the predominate bite, providing great action for Girle’s sport anglers.

Moving into the Gulf of Mexico, Girle is working the artificial reefs. These areas are abundant with species waiting to take the hook. Live shrimp is attracting some tasty lane and mangrove snapper. Gag and red grouper, as well as some keeper-size sheepshead, are intrigued by the shrimp. Jack crevalle and blue runners also are present.