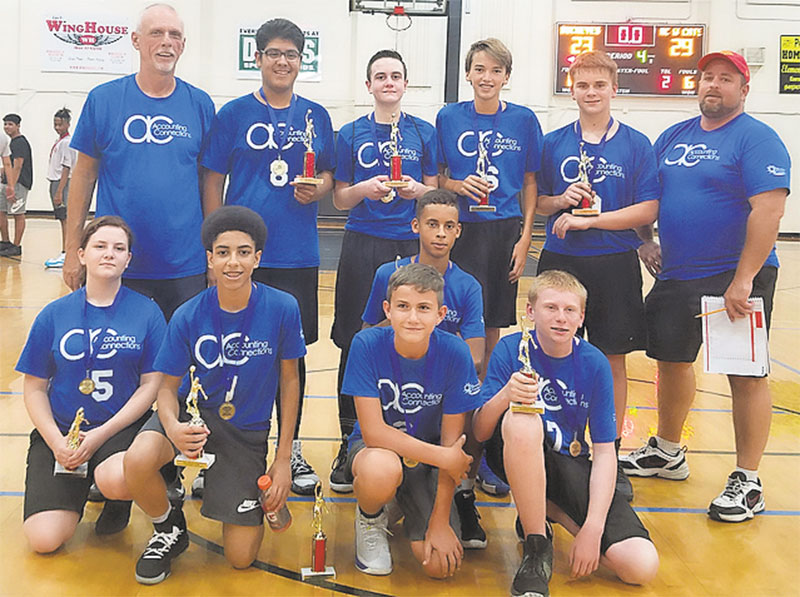 With the conclusion of the regular season in the adult soccer league at the Center of Anna Maria Island, final seeds are set for the playoffs Dec. 12.

Flynn Law and MuniPlan had matching 4-4 records, but the Law won a head-to-head tiebreaker and fifth seed. Moss Builders at 3-5 and Vacasa at 1-7 held onto the No. 7 and No. 8 seeds, while Lancaster Design was eliminated after suffering an 0-8 season.

Ross Built versus Flynn Law will top off the playoff action at 6 p.m. Thursday, Dec. 12, followed by No. 3 Vintage Beach taking on No. 6 MuniPlan. Next up, No. 1 seed Blalock Walters takes on No. 8 seed Vacasa, and the action will close with No. 2 Sato Real Estate taking on No. 7 Moss Builders.

In action last week, Ross Built kicked off Dec. 5 action with a 6-3 victory over Vintage Beach behind two goals each from Kevin Roman and Greg Ross. Damir Glavan and Connor Bystrom chipped in with goals and Mark Rudacille came through with 11 saves in the victory.

Cody Wright, Cole Peterson and Joey Hutchinson each scored goals, while Clancy Vaughn finished with two assists in the loss.

Sato Real Estate rolled to an 8-3 victory over Flynn Law behind four goals and an assist from Amy Ivin. Conrado Gomez, Nate Talucci, Race Aranda and Josh Sato each goal, and Cliff Powell made four saves.

Zachary Lieb scored two goals to lead Flynn, which also received a goal and an assist from Daniel Anderson and nine saves from Robb Marshall in the loss.

Top seed Blalock Walters cruised to a 7-2 victory in the third match Dec. 5 behind a hat trick from Brooke Capparelli. Matt Staggs, Greg DeMuse, Luis Pichardo and Neil Fellowes each scored goals. Robbie Fellowes chipped in with a pair of assists, while Luke Grady helped preserve the victory with six saves.

Keith Mahoney and Gerardo Urbiola scored a goal each and Jason Chiafalo made nine saves in the loss.

The final match of the night was fittingly a battle to avoid last place between Vacasa and Lancaster. Vacasa held on for a 5-3 victory and clinched a spot in the playoffs, thanks to a hat trick from Eric Pullen and a goal each from Stetson Matthews and Nick Bouchard. Pullen and Jessica Williams added assists, while Trey Horned made eight saves in the victory.

Miguel Ajoy scored all three goals to lead Lancaster Designs and the goalkeeper made 19 saves, to no avail.

Palmer opened the week with nine ringers on his first 10 throws in his first pool play match during the Dec. 3 games to roll to an easy victory. He moved into the finals after winning his next two matches and squared off against the other undefeated team of Steve Doyle and Bob Lee.

Palmer stayed hot in the finals, rolling to a 22-5 victory over Doyle and Lee to earn the day’s championship.

The Dec. 7 games saw three teams advance to the knockout stage. The team of Sam Samuels and Lee drew the bye and watched as Palmer moved to the finals with an easy 23-8 victory over Bob Mason and Hank Huyghe. The finals were all Palmer, rolling to a 24-10 victory over Samuels-Lee to finish off an undefeated week at the pits.

Beautiful weather helped produce a full week of action on the links at the Key Royale Club, starting Dec. 2 with a nine-hole modified-Stableford system match for the men.

Mike Pritchett carded a plus-3 to win individual honors by a point over John Cassese, Mike Gillie, Bill Shuman and Peter Soleveld who finished in a four-way tie for second place at plus-2.

The women took over the course Dec. 3 for a nine-hole, individual-low-net match in four flights.

Sally York’s 4-under-par 28 was the low-net round of the day, good for first place in Flight D.

The men were back on the course Dec. 5 for a nine-hole scramble, that saw the team of Don Grau, Dale Hudson, Dave Richardson and Tom Solosky combine for a 5-under-par 27 and clubhouse bragging rights for the day.