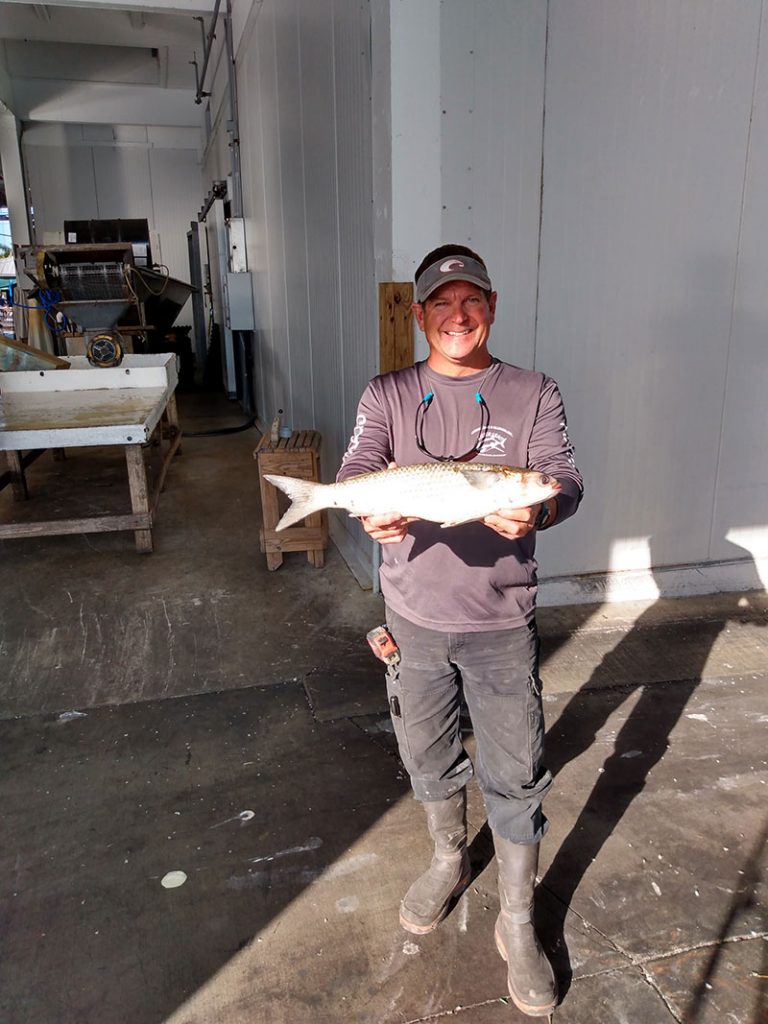 John Banyas shows off a fat mullet Dec. 5 at his fish processing plant on the waterfront in Cortez. Islander Photo: Mike Tokars

It’s beginning to look a lot like Christmas in Cortez.

Around this time of year, the mullet run in local waters and commercial fishers give chase.

Like other fish from rivers, estuaries and bays, mullet congregate and then run in schools to offshore environments to complete the spawning cycle.

This is when fishers target the mullet.

Banyas said there are 15-20 local boats catching fish and 40-50 boats from other areas, including out of state.

To catch mullet, fishers must use cast nets or seines and it’s back-breaking work.

Banyas told The Islander this year’s run began on Thanksgiving and will last until a few weeks after Christmas.

“They like to run during cold fronts,” Banyas said of the mullet. “The first front was OK. The fish are alive — there’s no red tide, so that’s good.”

Northwesterly winds and a dropping barometric pressure trigger mullet migration from canals and backwater in large schools to spawn in the Gulf of Mexico.

Catching the mullet before they spawn is the fishers’ goal.

But the state of the market is bad news.

“The price is in the gutter,” said Banyas. “The market is flooded. People didn’t make a lot of money last year and there’s not a lot of fishermen around.”

Local fisher Christian Chamberlain, 29, of Bradenton, said this year is “not looking good at all.”

Chamberlain, who sells his catch to Banyas, said, “There’s too much pollution and there’s not many fish around at all.”

2 thoughts on “The mullet are runnin’”