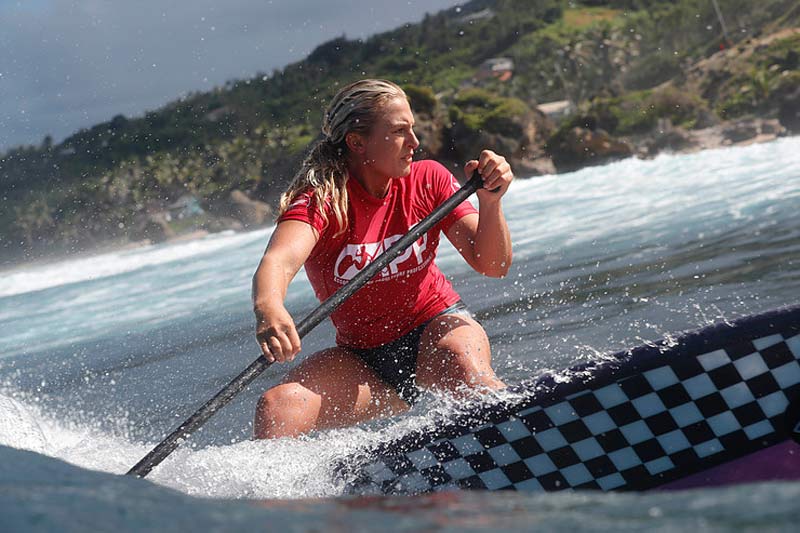 Izzy Gomez appeared in the Nov. 26 edition on a championship ride during a contest in Barbados. She went on to win her fifth world title. Islander Photo: Courtesy appworldtour.com 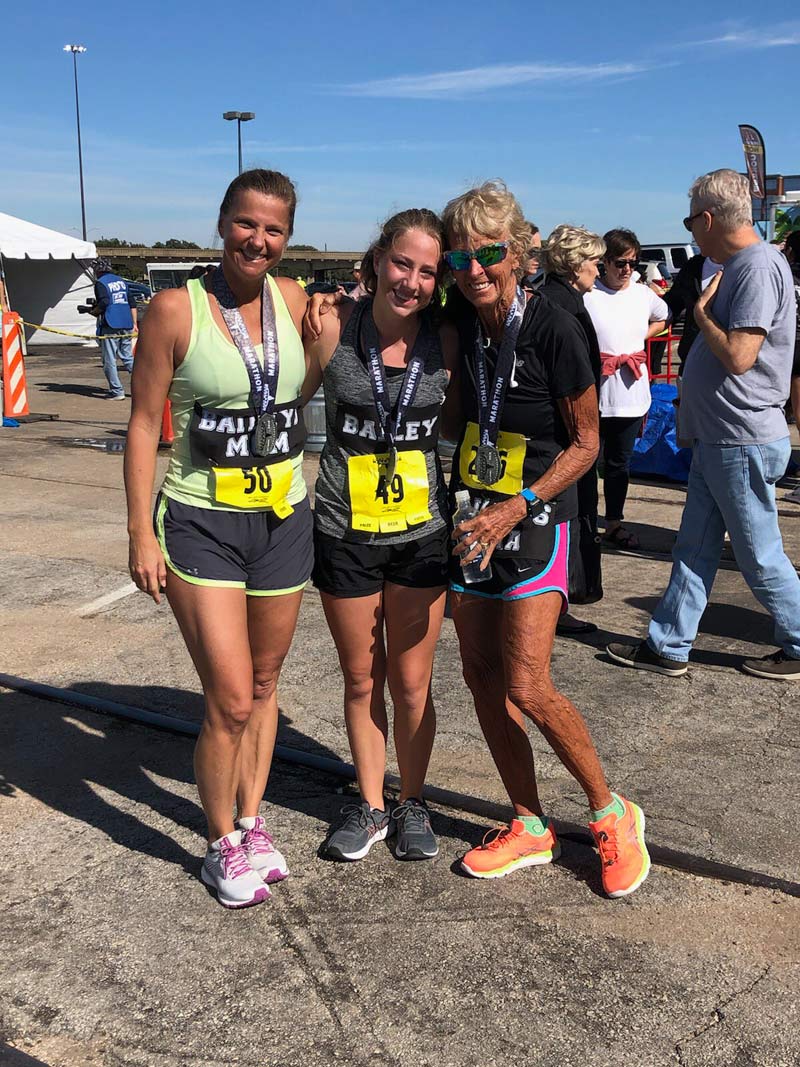 Jamey and Bailey Briscoe of Celina, Texas, and Sandy Meneley of Holmes Beach were in the Nov. 26 issue of The Islander after running the Fort Worth Marathon Nov. 10 in Fort Worth, Texas. Islander Photo: Courtesy Fritz Meneley 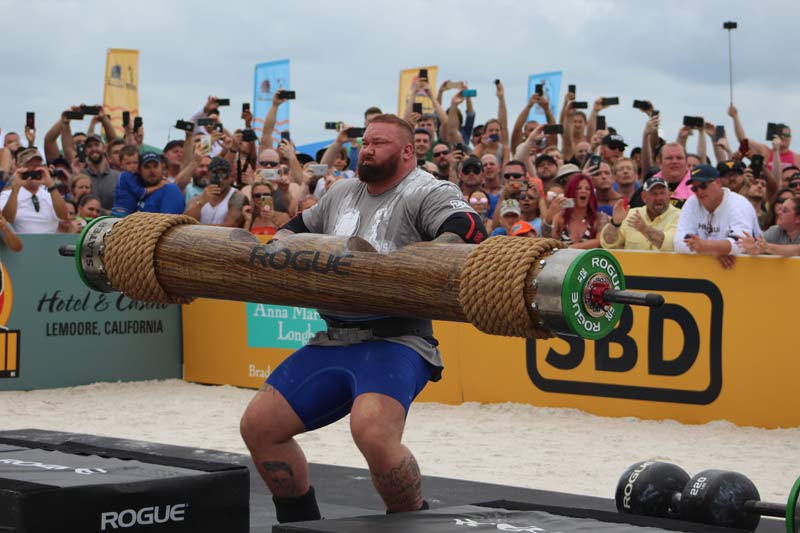 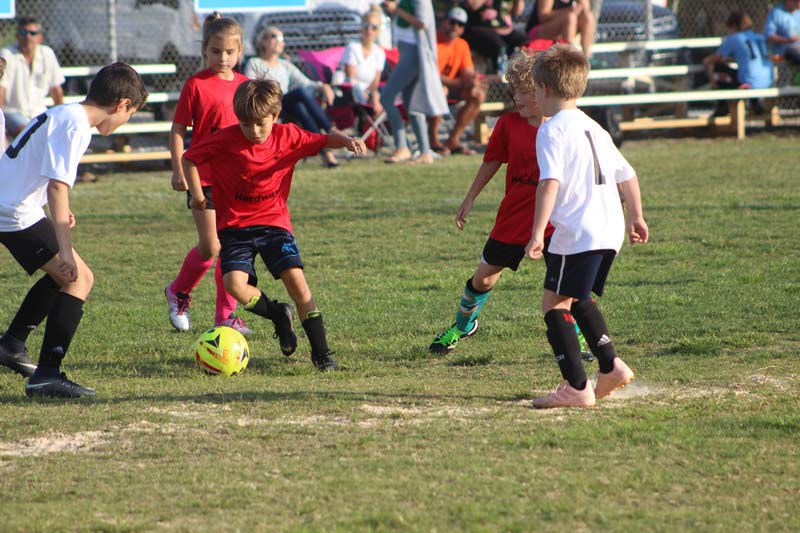 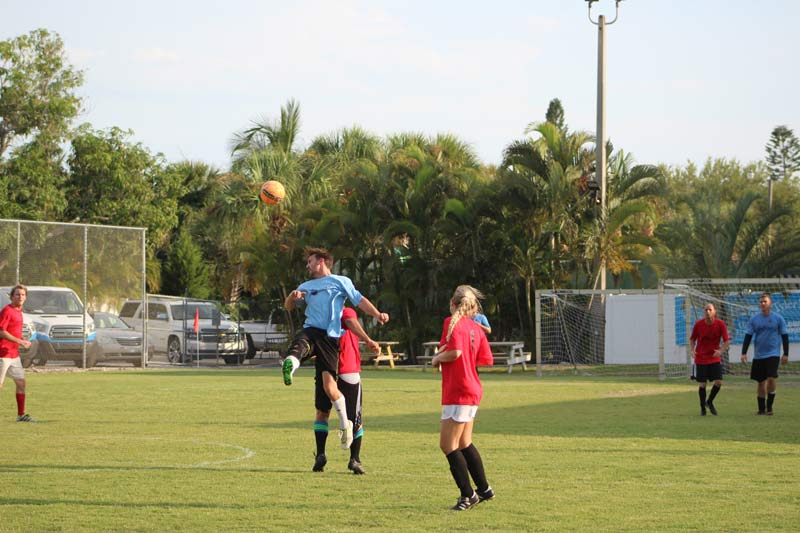 My how the time flies.

It’s hard to believe another year has passed and it’s time to share another top 10 in sports for the year!

This year’s top 10 is impressive, especially for our adult competitors. Oh, there were the usual assortment of adult sports submissions, including action on the golf course from the Key Royale Club in Holmes Beach, the horseshoe pitchers from the Anna Maria City Hall pits and all of the adult sports leagues at the Center of Anna Maria Island, but island residents put themselves out there to compete and that’s ultimately what sports are about: Competition.

The center sports programming provides the bulk of my stories and youth sports has been a passion for me for many years. However, I place more weight on sports stories where islanders put themselves out there against the rest of the world and this year there were many.

I want to thank Tim Holly, Connor Haughey and the rest of the center staff for help with my weekly sports stories, as well as weekly contributors Jay Disbrow from the horseshoe crew and Tom Nelson from at Key Royale Club.

Most of all, I want to wish the readers a happy new year!

Gomez, granddaughter of West Coast Surf Shop owners Ronny and Jim Brady and daughter of Brandy Brady of San Clemente, California, and Raul Gomez of Naples went into the event leading the world rankings and knew a victory in Barbados would clinch her record fifth title ahead of the World Tour Finals in Las Palmas de Gran Canaria Dec. 11-18.

The victory, her 12th, broke a tie with Kai Lenny for most APP victories.

For the season, Gomez has been dominant, taking second place at Sunset and garnering wins in New York and Barbados — and she’s only 19.

In addition to competing on the APP tour, Gomez hopes to qualify in shortboard and paddleboard surfing for the Summer Olympics in Tokyo, Japan, when the games kick off July 24, 2020.

Bailey, a high school senior, ran cross country for her high school team but had never tackled such a long race. Jamey and Sandy were excited to experience the Fort Worth Marathon with the third generation of the Meneley family.

For the race record book, at age 72, Sandy was the oldest female runner and 17-year-old Bailey was the youngest. The average time for the women was 4 hours, 38 minutes. Sandy and Jamey crossed the finish line together in 4 hours, 14 minutes, while Bailey finished the race in just over five hours.

Prior to the race, Sandy was overheard saying it would be her last full marathon, but the joy of running with daughter and granddaughter might mean another family marathon in the future.

The second annual Skyway 10K took place March 3 under sunny skies, no wind and a pleasant temperature of 65 degrees for the 6,679 participants who somehow managed to snag entries for the event — a sellout in a mere 18 minutes.

Longtime Galati Yacht Sales employee Mickey Hooke was one of the almost 7,000 runners that managed to get into the race and he entered with one goal in mind: To better his time from last year’s inaugural race.

Though not feeling on top of his game, Hooke pushed through and reached the top of the bridge in 25:37. He crossed the finish line in 42:57 — good enough for 29th place overall and second in the male 55-64 age group of 501 runners.

Other notable participants were my sisters, Mo Cassidy who made it look like a walk in the park — because she walked — and Theresa Cassidy Collins, who ran the bridge for a second time.

The Tachi Palace World’s Strongest Man contest made it into the June 18 issue of The Islander. The event started June 13 in downtown Bradenton with 25 competitors in five groups. There were five events over three days held in downtown Bradenton, at Coquina Beach and the Manatee Public Beach, with competitors hoping to make it to the final 10 and a TV show in the fall.

After three days of grueling competition in some serious Florida heat, the finals at the Manatee Public Beach was down to 10 competitors. They battled it out for the title of world’s strongest man in five events.

The competition brought around 1,000 enthusiastic and curious people to each venue, though getting a good look at the action was difficult. Some folks adapted and found other ways to get a view, including several folks who brought stepladders to see over the crowd.

The 2019 fall youth soccer league Nov. 12 championship game at the Center of Anna Maria Island played out in the Nov. 19 issue of the Islander. What makes this story special is the fact that eventual 8-10 division champion, West Coast Surf Shop, didn’t win a game in the regular season.

The 8-10 championship game, which pitted the No. 3 seed Ugly Grouper versus the No. 4 West Coast Surf Shop, meant there would be an unlikely champion based on regular-season records regardless of which team won.

West Coast came out on top thanks to a game-winning penalty kick by Dylan Phillips that set up the 3-2 penalty-kick shootout victory.

The center’s youth wrestling team made it to the pages of the Jan. 15 issue after a good showing in the Brandon Wrestling Tournament at Brandon High School Jan. 11.

Congratulations to the center’s wrestlers and families.

The Anna Maria Island horseshoers took the game — normally played Wednesdays and Saturdays at the Anna Maria City Hall pits — to another level in 2019.

They ventured across the bridge to the mainland Jan. 16 to take on the Trailer Estates horseshoe competitors in a friendly tournament that made the pages in the Jan. 22 issue. The Trailer Estates group came out on top by an 18-14 score in a fun and competitive day.

The team of Hank Huyghe and Tom Farrington were the top AMI team, posting an unbeaten record on the day.

The March 5 issue saw the Trailer Estates horseshoe pitchers on the island Feb. 25 for a rematch against the AMI pitchers with more than 40 participants.

The locals successfully defended their home turf, er, clay, opening up an early lead and holding to win the daylong challenge by a 33-15 score.

The AMI pitchers also were in the Feb. 26 Islander for their exploits in the Gulf Coast Games for Life at G.T. Bray Park in Bradenton.

The spring youth soccer league championship saw competitive matches in the 8-10 and 11-15 divisions.

The 8-10 championship game May 20 saw two goals by Dennis Gallagher to help Beach House Real Estate overcome a 1-0 deficit and prevail by a 2-1 margin over Freckled Fin.

Duncan Cloutier scored the lone goal for Freckled Fin, which also received 11 saves from Cale Rudacille in the loss.

The 11-15 championship game was another nail-biter, as the teams went to a 0-0 draw. CABB Cleaning prevailed 4-2 in the penalty kick shootout behind goals from JM Feeney, Connor Samblis, Sam Liester and Travis Bates, who notched the game-winner.

9. Blalock Walters cruises to No. 1 in adult soccer

Championship night in the adult coed soccer league at the center played out in December. The game, which took place Dec. 19, validated the regular season standings and seedings, as Blalock Walters completed an undefeated season with a 5-1 victory over Vintage Beach.

Championship night in the spring adult soccer league at the center was reported in the July 2 edition and there was drama in both semifinal matches.

On June 27, Gulfview and Jiffy Lube battled to a 6-6 tie in regulation play in their semifinal match, sending it to penalty kicks, where Gulfview prevailed 4-2.

The second semifinal match of the night saw Flynn Law and Beach House Real Estate battle to a 2-2 tie, sending it to penalties.

The championship match lacked the drama of the semifinals, but nobody on Gulfview will complain about their 5-3 win over Beach House Real Estate. Aaron Parkin and Keith Mahoney scored two goals each, while Ashley Friszman added one goal. Jordan DeMers came through with 10 saves to help preserve the victory.