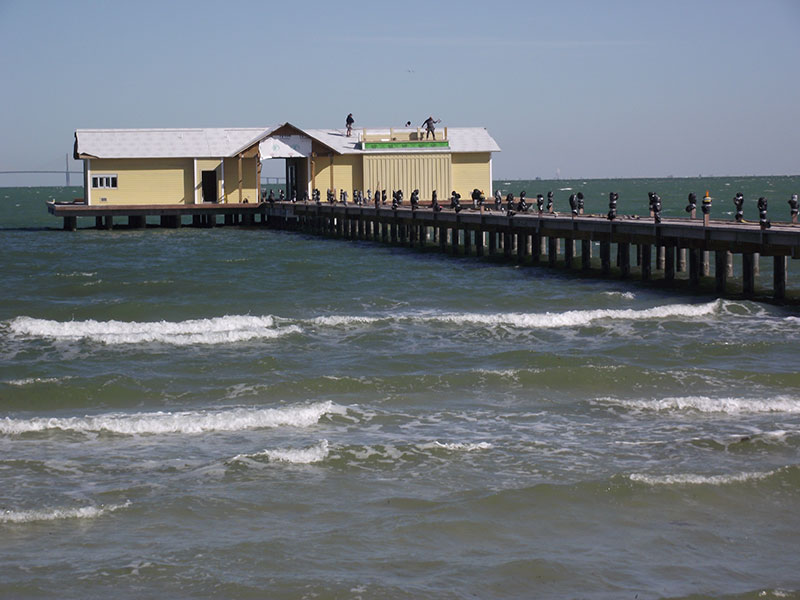 Workers put finishing touches Jan. 9 on the roof of the buildings at the T-end of the Anna Maria City Pier, 100 S. Bay Blvd., Anna Maria. The buildings will house a restaurant, bait shop and restrooms. Islander Photos: Phil Colpas 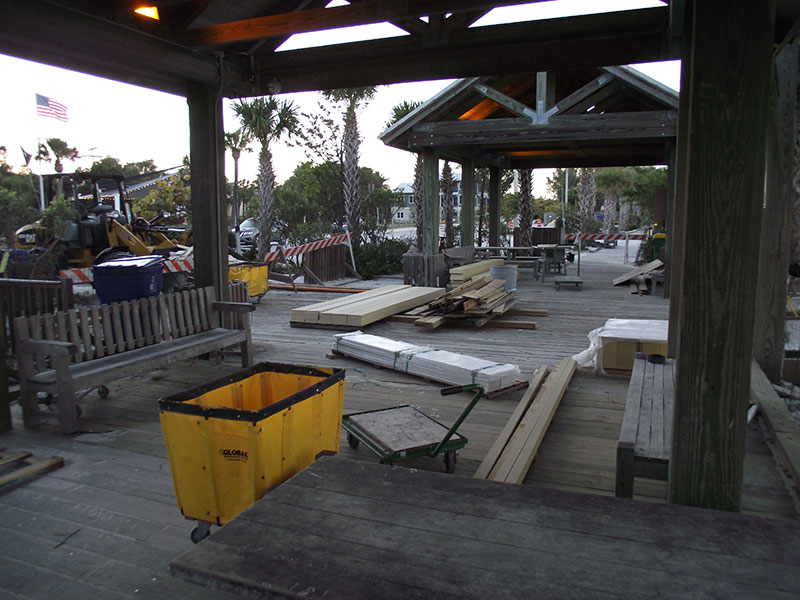 Construction supplies are stacked Jan. 9 near the Anna Maria City Pier, which is tentatively closed, pending and opening to fishers in late-February.

The Anna Maria City Pier is still on track for a late-February opening for anglers, but the fate of the pier’s restaurant and bait shop remains unknown.

However, Mario Schoenfelder, city pier tenant since 2000, likely won’t play a role in the pier’s future.

The city pier was closed by the city and Schoenfelder’s rent was abated after the September 2017 damage from Hurricane Irma. In 2018, the pier was demolished by the city to make way for a new pier.

Although Murphy said he and Schoenfelder had come to an agreement on many details, there remained two outstanding issues: insurance and rent payments.

“I am asking the city to explain how sufficient insurance coverage would be provided and how a sufficient degree of financial safety for the tenant would be established,” Schoenfelder wrote.

Murphy said at the Jan. 10 meeting, “Mr. Schoenfelder is willing to put up $800,000 for improvements on the pier. My recommendation is that we provide insurance.”

A rough cost estimate for casualty, fire and wind insurance is $50,000 per year, according to Murphy, and about half that amount would go toward insuring improvements with the city insuring any improvements that Schoenfelder couldn’t take with him at the termination of the lease.

That eliminated one point of contention for the mayor, leaving the monthly payment.

Murphy had emailed Schoenfelder Sept. 30, 2019, and presented him with two base-payment options for a new lease.

The first option included a monthly base payment of $21,600, along with either a 3% annual increase to begin after the first year or an annual adjustment based on the consumer price index.

The second option included a monthly base payment of $18,900, along with either a 3% annual increase to begin after the first year or an annual adjustment based on the CPI — $250,000 upon signing the lease.

Schoenfelder countered with monthly payments of $8,000 with the first six months rent-free, to begin when the restaurant opens, CPI-based adjustments kicking in after three years and a 10-year lease with two five-year options.

Carter, who asked Schoenfelder how he came to a payment of $8,000 per month on a new facility when he previously paid nearly $12,000 per month, learned his $12,000 payment offer was based on an investment of $500,000, while the offer to pay $8,000 monthly is based on an initial investment of close to $1 million, the cost for the build-out, fixtures and equipment needed to operate.

The proposed lease was for a 20-year commitment: 10 years plus two five-year options, with a potential percentage increase based on the CPI after the third year of the lease.

The city would be responsible for maintenance, including annual engineer inspections of the pier structure and pilings, according to the proposed terms, and the cost, yet to be determined, would be prorated annually and added to the lease.

Based on the terms of Schoenfelder’s final offer, it would take the city 20 years to pay back its investment of $2.6 million to build the new pier, Murphy said. When the cost of insurance is factored in it is 27 years.

Of the total pier cost of $2.6 million, $1.2 million has been paid, while $1.5 million remains outstanding.

“We’ve got the money earmarked for the rest of the pier,” Murphy said. “We’ve got to spend it. But we’ve got it.”

That money will come out of the city’s general revenue fund and “is not the money we get from the Federal Emergency Management Agency and the (Manatee County) Tourist Development Council,” Murphy said. “There remains $500,000 between the state of Florida and Manatee County we have yet to collect, but that will not offset the total cost of $2.6 million.”

From the dais, Tripp said, “I would like to see more options for the city and move forward with the RFP process.”

The commissioners unanimously agreed to decline Schoenfelder’s offer and Short motioned to begin the RFP process. The vote was unanimous.

Murphy said he wanted to issue the RFP by Jan. 15, advertise and allow 30 days for evaluation.

“There have been quite a few people interested in this space,” he said.

The mayor said the RFP wasn’t issued previously because there was still an existing tenant and a lease.

“I believe it’s in the city’s and citizens’ best interest to move forward and look at other options for the pier,” Crane said, adding that open bidding would put a value on the lease and payments.

Crane expressed an interest in Schoenfelder participating in the RFP process.

Schoenfelder said if he did participate, he wouldn’t change his proposal and that he thought it unlikely other restaurateurs would agree to larger payments.

Although Schoenfelder is permitted to reapply during the RFP process, it appeared doubtful.

“I’m not sure how long the RFP process would take, and I’m reluctant to take part in another delay,” Schoenfelder said. “It’s an endless story. And I want this story to be ended.”