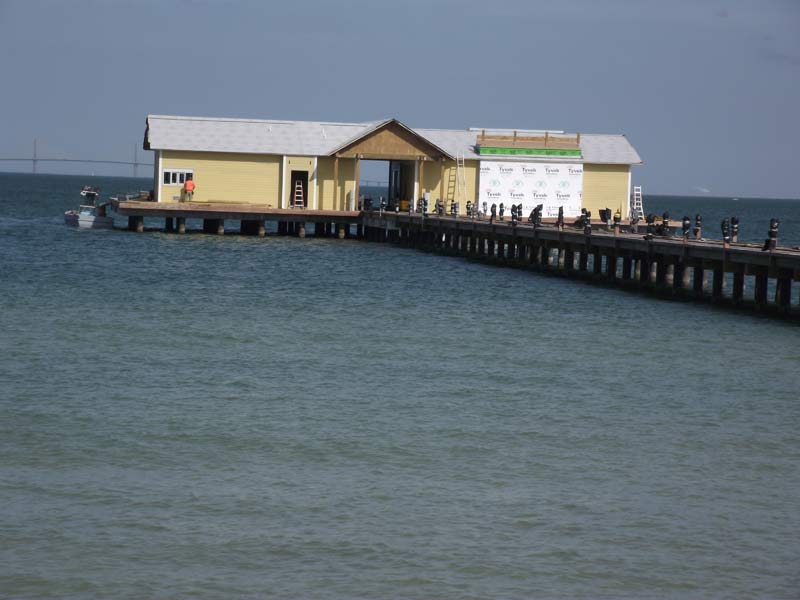 Two key puzzle pieces may be coming together as Anna Maria takes steps to open a new city pier.

First up, Mario Schoenfelder, pier tenant since 2000, met the city’s deadline extension of Dec. 31, 2019, with his final pier lease proposal.

Second, the vacant position of pier liaison may soon be filled. The responsibility previously fell to Dale Woodland, who served seven two-year terms as a city commissioner but failed to qualify for re-election in November 2019. Woodland erroneously paid the $48 qualifying fee with a personal check instead of the required campaign account.

The commission agreed to accept applications for Woodland’s vacant seat through Jan. 8.

Woodland told The Islander in a Jan. 5 email that he hopes to be appointed to serve another two years.

He wrote: “I am a public servant, always have been and always will be, I have no agenda but to serve. Our residents and visitors alike are welcome and a benefit to our city.”

He also wrote, “I work in our city and am blessed to have people talk to me every day; their input drives me. When we are not always on the same page, our differences are respected and I have to make a decision, that’s my job.”

He thanked everyone who has supported him in his effort to regain his seat on the dais.

Filling the empty commission chair will be discussed by the commission at 6 p.m. Thursday, Jan. 9.

Schoenfelder began his final lease proposal to the city commission with this statement: “Before presenting my offer, I would like to address a matter that in my view is critical to every future tenant who is willing to invest considerable funds for the buildout and equipment of the new city pier restaurant and bait shop and is willing to lease the premises. That matter is insurance.”

Schoenfelder said he understands the tenant is responsible for liability and contents insurance, and the city plans to assume casualty coverage.

“I am asking the city to explain how sufficient insurance coverage would be provided and how a sufficient degree of financial safety for the tenant would be established,” Schoenfelder wrote.

According to the terms of the current lease agreement, expiring December 2020, the tenant is responsible for maintaining general liability and property insurance, protecting against personal injury, death or property damage at the leased premises.

The agreement also requires the landlord — the city — to maintain fire and casualty insurance equal to the full insurable value of the improvements to the leased premises.

Rent is abated from the date of a casualty until the premises are substantially restored and the leased property is returned to the tenant.

Schoenfelder’s monthly lease payments, which over time increased to $11,500, were discontinued when the historic pier, originally built in 1911, was closed after damages by Hurricane Irma in September 2017. The pier was demolished in 2018 and the city hired I+iconSOUTHEAST to construct the new pier.

The other major sticking point of the negotiations concerns rent and a down payment, first reported in the Jan. 1 issue of The Islander.

Mayor Dan Murphy had emailed Schoenfelder Sept. 30, 2019, and presented him with two base-payment options for a new lease.

The first option offered by Murphy included a monthly base payment of $21,600, along with either a 3% annual increase after the first year, or an annual adjustment based on the consumer price index.

The second option included a monthly base payment of $18,900, along with either a 3% annual increase to begin after the first year, or an annual adjustment based on the consumer price index.

The second option would require Schoenfelder pay a $250,000 lump sum upon signing the lease.

Schoenfelder countered: A 10-year lease with two five-year options, monthly payments of $8,000 with the first six months rent-free, and CPI-based adjustments kicking in after three years.

If negotiations with Schoenfelder fall through, the city commission has a plan in place to issue a request for proposals seeking a new tenant.

Murphy provided an update on pier construction in a Jan. 2 email to The Islander:

“Siding is being placed on the building. The fireline is complete and pending final inspection,” Murphy wrote. “The final platform inspection is scheduled for Jan. 9.”

While the new pier remains on track for a February opening for fishing, the dates for the opening of the restaurant and bait shop are not yet set.

The commission in December delayed voting on a city pier ordinance that would clarify the rights and jurisdiction of the pier lessee.