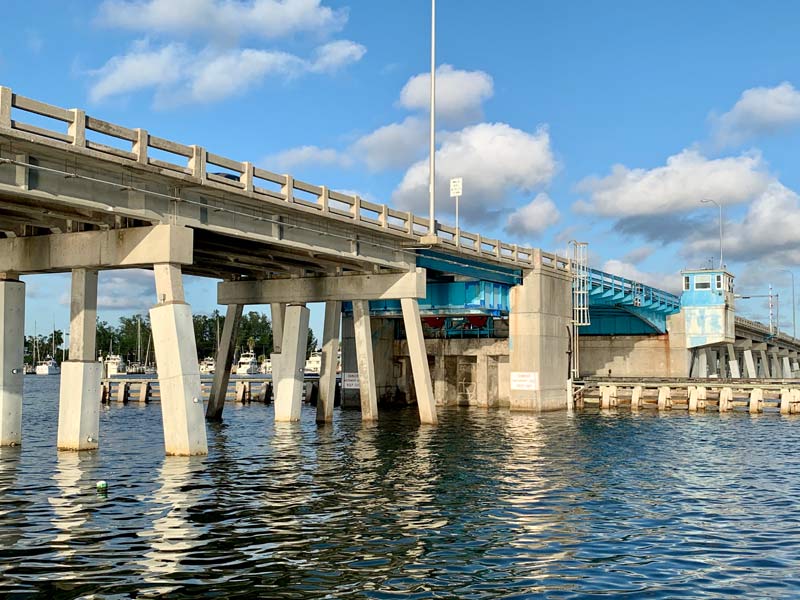 The Cortez Bridge, first opened to traffic over the Intracoastal Waterway in 1957, faces replacement by the DOT with a high-rise bridge. Residents of Cortez and Anna Maria Island oppose the plan. Islander Photo: Sarah Brice

The fight over the planned Cortez megabridge is headed to the Florida 2nd District Court of Appeal.

Joe McClash, who petitioned for a hearing in opposition of the Florida Department of Transportation’s plan to build a 65-foot-clearance fixed span to replace the current drawbridge, filed notice Jan. 3 of his intent to appeal the DOT denial of a hearing to the district court.

He must file a brief within 70 days.

The DOT has denied two efforts by McClash to gain an administrative hearing to challenge 25 instances in which he says the agency erred in its decision to build the high bridge.

“The DOT is playing the judge without any evidentiary hearing,” McClash told The Islander in a Dec. 19 interview.

The DOT announced Oct. 10 it had approved a 6-year project development and environment study and was proceeding with a $6.2 million design plan to replace the 62-year-old drawbridge that links Cortez to Bradenton Beach.

McClash filed a petition Oct. 29 for a formal administrative hearing.

The DOT rejected McClash’s petition Nov. 13, stating in its “order of dismissal without prejudice” that the matter is under federal jurisdiction, not state. The DOT maintains it is taking action on behalf of the federal government and not as a state agency.

“Since the complaint is regarding federal law, a federal judge needs to hear the complaint, not a state permit administrative hearing officer,” DOT spokesman Brian R. Rick wrote in a Dec. 19 email to The Islander.

“This ruling defies logic and, most of all, allows a state agency to dictate to our community the type of megabridge or other road projects without recourse provided by our state’s rules,” McClash wrote in a Dec. 18 email to reporters.

The case before the appeals court would challenge the DOT’s rejection of the administrative hearing.

“It would have nothing to do with the merits of the case,” McClash said in December.

The bridge, located on Cortez Road, spans the Intracoastal Waterway, providing one of two links for Anna Maria Island to the mainland.

Megabridge opponents say it would change the character of Cortez, a fishing village designated a federal historic district in 1995. Many residents of Cortez have been fighting the high bridge since the DOT revealed a previous replacement plan in 1989 — and retracted it.

McClash, a Manatee County commissioner 1990-2012 and an environmentalist, filed the legal petitions on behalf of himself and several Cortez residents and organizations.

Jane von Hahmann, a 43-year Cortez resident who served on the county commission 2001-08, is one of the petitioners.

Joe Kane, also a petitioner, has lived in Cortez for more than two decades.

Other petitioners are the environmental group ManaSota-88 and two other nonprofits, the Florida Institute for Saltwater Heritage and the Cortez Village Historical Society.

The Anna Maria Island Bridge on Manatee Avenue, which also connects the island to the mainland and was built the same year as the Cortez Bridge, also is slated to be replaced by a 65-foot-clearance fixed span. Its design schedule is further along than the Cortez Bridge because the DOT approved it first.

The DOT plans to spend $8 million by 2025 for right-of-way acquisition for the new bridge.

None of the proposed expenditures has been budgeted. Amounts and time frames often change by the time the fiscal year budget is allocated.

Construction costs also have not been budgeted, but the DOT says it expects the new bridge to cost at least $72 million.

The new bridge is not expected to be completed for another 10 years or so.