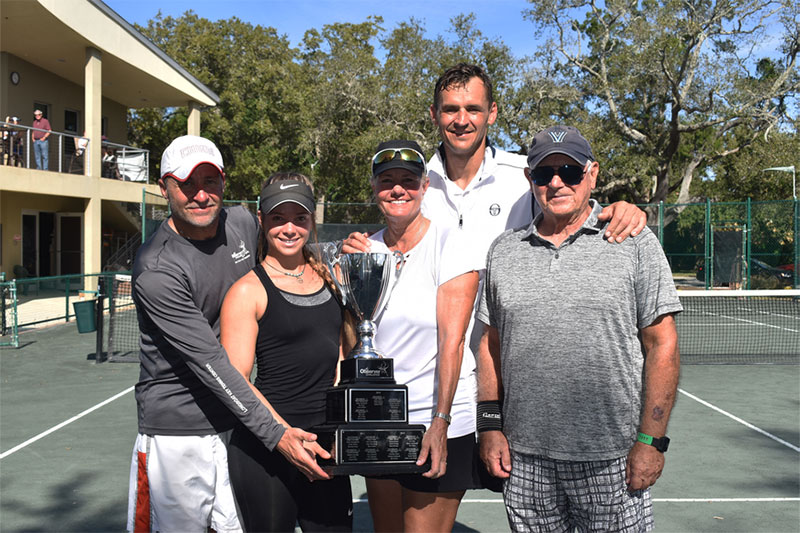 After three weeks of action in the youth flag football league at the Center of Anna Maria Island, the haves are starting to separate themselves from the have-nots.

MuniPlan, Hashmark Sports and Killer Bait hold down the top spots in the 14-17 division with two wins each, while Gulf Drive Cafe and Ugly Grouper are still in search of their first victory.

Progressive Cabinetry sits atop the 11-13 division standings with a 2-0 record, just ahead of 2-1 Solid Rock Construction. Slim’s Place holds down third with a 1-1 record, while Ugly Grouper is in last place at 0-3.

The 8-10 division has HSH Designs and Diamond Turf leading the division with matching 2-0 records, just ahead of 2-1 Moss Builders. Cool Today, Rays Ramblings and Beach Bums follow with 1-2 records. Swordfish Grill occupies the cellar with an 0-2 record.

Action in the 8-10 division kicked off Jan. 21 with Beach Bums rolling past Swordfish by a 29-6 score behind Carter Eurice, who ran for a touchdown while also taking an interception to the house. Jackson French added a touchdown and Jonathan French finished with a touchdown reception and an extra point.

Cale Rudacille connected with Nixon Connor for the lone touchdown by Swordfish in the loss.

The second game of the night saw Diamond Turf blow out Rays Ramblings 38-6 behind a huge game from Maddox Culhane. Culhane ran for two scores, caught a touchdown pass from Carson Clover and finished with three interceptions on defense, including one he took to the house. Clover completed the scoring for Diamond Turf with a pick six of his own.

Rays Ramblings was led in the loss by Jack McCarthy’s touchdown pass to Kellan Hunt.

The final 8-10 division game of the night saw Moss Builders outlast Cool Today 33-32 behind a strong all-around game from Ewen Cloutier. Cloutier passed for two TDs and ran for two TDs, while also catching one and returning an interception for another touchdown. Gavin Lyssy completed the scoring with a touchdown reception and an extra point.

Progressive Cabinetry kicked off the action Jan. 21 for the 11-13 division with a 13-12 victory over Solid Rock Construction. Matthew Hennessey connected with Kenneth Nieding for a touchdown, while Luke Bowes ran for a touchdown and scored the game-winning extra point.

Jack Mattick ran for a touchdown and caught a TD pass from Victor Albrecht to lead Solid Rock Construction in the loss.

Slim’s Place edged Ugly Grouper 26-24 to close out the 11-13 division action for the night behind three rushing touchdowns from JM Feeney, who also had a pair of interceptions including, one he returned for a touchdown.

Ashton Hovda had three touchdowns to lead Ugly Grouper, which also received a TD pass and a reception from Brennan Gunter and a touchdown catch from Mikey Coleman in the loss.

Killer Bait outscored Ugly Grouper 29-18 to open the 14-17 division action Jan. 21. Ben Barreda threw for a score, ran for one and finished with three interceptions, including one returned for a TD to lead Killer Bait, which also scored on catches from Julius Petereit and Cole Carter.

Jonah Durst ran for a TD and was on the receiving end of a touchdown pass from Phoenix Doronic to lead Ugly Grouper, which also received a pair of 2-point conversions from Parker Davis in the loss.

The final game of the day saw Hashmark Sports roll to a 31-0 victory over Gulf Drive Cafe behind four touchdown passes from Ian Godfrey, including three TD catches by Chance Hayward. Nate Costello added another touchdown reception, while Noah Costello returned an interception for a TD.

The action continues this week.

Speaking of action, your game photos are welcome at The Islander sports desk. Submit photos with captions to kevin@islander.org.

What’s up in the pits?

Three teams met in a playoff Jan. 22 during horseshoe action at the Anna Maria City Hall pits. Tom Farrington drew the bye into the finals and watched as John Crawford and Neil Hennessey stayed alive with a 21-18 victory over Bob Palmer and Tom Anderton. Farrington walked his way to the championship with a 23-17 victory over Crawford and Hennessey.

Two teams battled for the day’s supremacy during the Jan. 25 games, which saw Crawford and Gary Howcroft pitch a 23-5 victory over Palmer and Hennessey.

Golf action at Key Royale Club teed off Jan. 20 with the men playing a nine-hole modified-Stableford system match that saw Barry Izzard and John Kolojeski in a tie for clubhouse bragging rights at plus-4.

Jana Samuels fired a 1-over-par 33 to edge Beth Lindeman for the top spot by one stroke.

The men were back on the course Jan. 23 for their weekly nine-hole scramble. The team of Neil Hammer, Bob O’Brien, Gary Risner and Al Waal combined on a 2-under-par 30 to take first place. Ron Buck, Ken Butler, Hoyt Miller and Bob Soos were two strokes back in second.