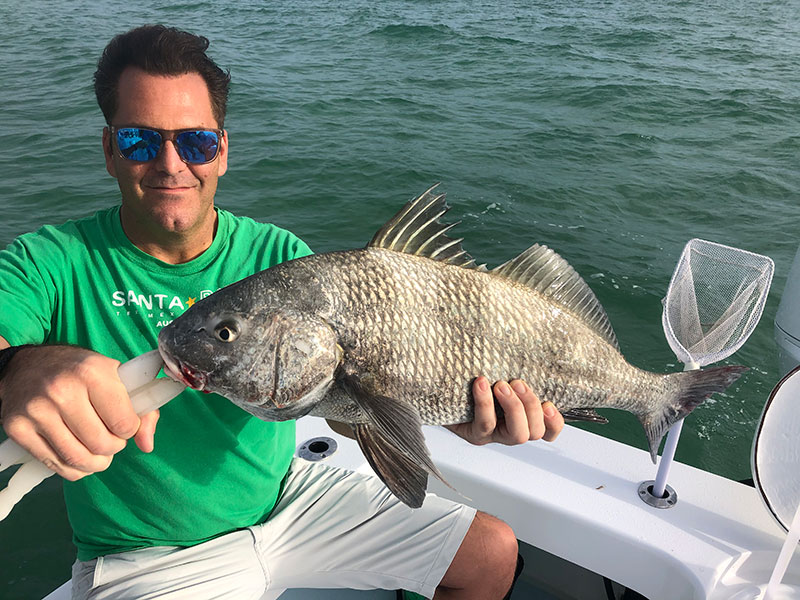 Joey Rearden, visiting the Anna Maria Island area from Atlanta, shows off a healthy black drum he caught Jan. 17 on a live shrimp while on a guided fishing trip with Capt. David White of Anna Maria Charters.

Fishing between the cold fronts is providing fairly consistent action for those trying to catch fish around Anna Maria Island.

Cashing in on these warmer conditions between cold fronts is great. For those looking for some fish to take home for dinner, switching the bait to live shrimp is where it’s at. Sheepshead, black drum, mangrove snapper and pompano are attracted to shrimp and are being caught with regularity.

Targeting structure is working for the sheepies, drums and snappers. As for the pompano, casting jigs tipped with shrimp along the beaches and over deep grass flats is proving successful.

Fishing offshore is producing action on hogfish, grunts and snappers with shrimp as bait. Using larger bait, such as pinfish, is working well for amberjack and grouper.

Capt. Aaron Lowman is fishing nearshore over hard bottom with live shrimp combined with a bottom rig. Many species are being reeled up, including hogfish, mangrove snapper, porgies, sheepshead and Key West grunts. Lowman adds that the bite is fairly consistent. Moving frequently to new spots is key to keeping the action going, as well as to gather a good number of fish for the cooler.

Capt. David White of Anna Maria Charters is working inshore on windy days, producing action for his clients. Big black drum and sheepshead are being caught along sandy shorelines and docks and seawalls. For those looking for sport, jack crevalle and catch-and-release snook are providing action.

While fishing offshore, White is hooking into some big amberjack, as well as red grouper and mangrove snapper.

Capt. Jason Stock is enjoying watching his clients get sore arms while wresting with big amberjack while anchored over offshore wrecks and hard bottom. For those looking to pull on something big, these fish fit the bill.

Other species being caught while offshore include gag grouper — up to 25 pounds — and red grouper in the 15-pound class. Mangrove snapper, another option, are coming in at 8-9 pounds.

Jim Malfese at the Rod & Reel Pier says fishing is a little sporadic at the north end of Anna Maria, but determined anglers, especially knowledgeable ones are finding success. Using live shrimp as bait is attracting catch-and-release redfish. Black drum, sheepshead and flounder are vying for shrimp. Macks are being caught — despite being in the middle of January. Casting speck rigs — in white or pink — seems to be attracting the most attention from these toothy fish.

Capt. Warren Girle is finding a good bite on a variety of species by drifting over deep grass areas and casting jigs tipped with fresh-cut shrimp. Bluefish, macks, ladyfish, jack crevalle and catch-and-release spotted seatrout are being caught in this fashion. And, as a bonus, lucky anglers are hooking up with a handful of pompano to take home for dinner.

On days when the Gulf of Mexico is calm, Girle is venturing out to the artificial reefs to bottom fish. Live shrimp on a knocker rig is attracting mangrove snapper and juvenile grouper, as well as Key West grunts, to the hook.

Lastly, fishing residential canals and docks is providing action on catch-and-release redfish and some black drum.