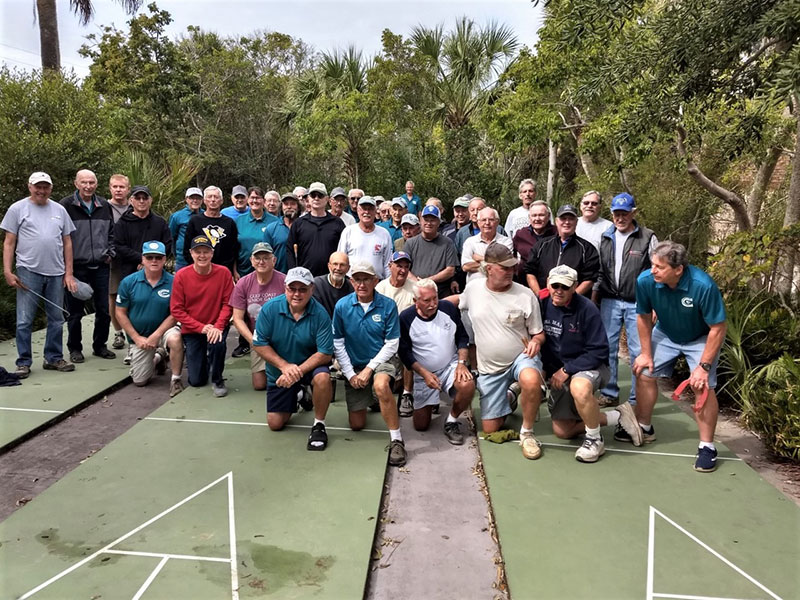 Speaking for the AMI pitchers, Samuels said, “This is a great bunch of guys! We renewed old friendships and made some new ones.”

Two teams met in the finals during Jan. 29 action at the pits. Bussey and Dom Livedoti won the day’s bragging rights after earning a 21-13 victory over Bob Lee and Bob Hawks.

The rain Feb. 1 stopped just in time for Farrington and Palmer to win the day’s proceedings with the lone 3-0 record in pool play.

After four weeks of action in the youth flag football league at the Center of Anna Maria Island, there are still four teams chasing an undefeated season.

HSH Designs is atop the 8-10 division with a 3-0 record, while Progressive Cabinetry is on top of the 11-13 division at the same mark. MuniPlan and Hashmark Sports share the top spot in the 14-17 division with matching 3-0 records, but that won’t last long — they were set to play each other Feb. 4.

MuniPlan opened 14-17 division play Jan. 28 with a 23-13 victory over Gulf Drive Cafe behind a pair of Tuna McCracken touchdown passes to Morgan Horesh and Fisher Dalhman. Blake Balais ran for a touchdown and added a pair of extra points to the victory, while Tyler Brewer added a quarterback sack for a safety.

Anthony Nguyen connected with Austin Bivona for a TD and ran for another score. Evan Christenson completed the scoring in the loss with an extra point.

Hashmark Sports cruised past Killer Bait by a 42-13 score behind three touchdown passes and a pair of pick-sixes from Ian Godfrey. Chance Hayward added two touchdown receptions and Alex McCauley finished with a TD. Nate Costello added a pick six and a pair of extra points to round out the scoring in the victory.

Jackson Hayes and Dalton Guthrie each threw a touchdown pass, while Julius Petereit and Cole Carter had touchdown catches to lead Killer Bait in the loss.

JM Feeney ran for a pair of touchdowns to lead Slim’s Place, which also received a touchdown pass from Caden Kitchie to Jaxon Rush in the loss.

Solid Rock Construction cruised to a 34-16 victory over Ugly Grouper behind two touchdown passes, a rushing TD and an interception return of a 2-point conversion from quarterback Victor Albrecht and a pair of rushing TDs from Evan Talucci. Christian Cole and Luke Winsper added TD receptions in the victory.

Aiden Templeton and Ashton Hovda each ran for a touchdown in the loss.

Moss Builders rolled to a 28-6 victory over Diamond Turf behind Ewen Cloutier, who ran for a touchdown and added a receiving TD that was thrown by Duncan Cloutier. Gavin Lyssy added a rushing touchdown and a pick six in the victory.

Drew Buky ran in the lone touchdown for Rays Ramblings.

Golf action at the Key Royale Club in Holmes Beach got started Jan. 27 with the men playing a nine-hole modified-Stableford-system match. Herb Clauhs carded a plus-6 to win individual honors by one point over Greg Shorten.

The women took the course Jan. 28 for a nine-hole individual-low-net match in four flights.

Roxanne Koche fired a 4-under-par 28 to win Flight A by a whopping four strokes over second-place finisher Phyllis Roe, who birdied the first hole.

Janet Razze rode a birdie on the eighth hole to a 3-under-par 29 and a first-place finish in Flight B. Marty Clark was alone in second with an even-par 32, while Jana Samuels was another stroke back in third place.

Markie Ksiazek cruised to victory in Flight D with a 3-under-par 29, two strokes ahead of second-place finisher Jane Perkins.

The men played a nine-hole scramble among 45 players Jan. 30. The team of Ken Butler, Ken Nagengast, Gary Razze and Jeff Ropar lapped the field with a 7-under-par 25 to earn clubhouse bragging rights for the day. The team of Art McMillan, Tom Perkins, Larry Pippel and Larry Solberg took second with a 2-under-par 30.