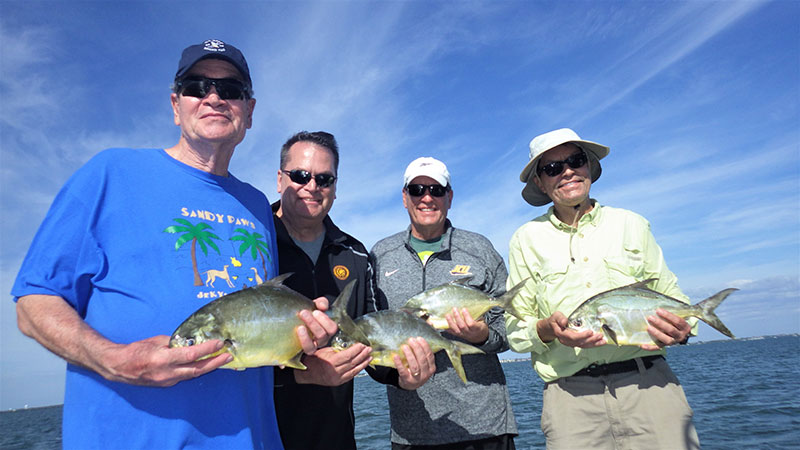 Brothers, Mike of Virginia, Steve of Colorado, Greg of Illinois and Jim Koemer of Texas show off some of their pompano, caught Feb. 18 inshore on shrimp and jigs. The foursome was guided to the fish by Capt. Warren Girle Brayden Petrie, visiting with family from Rockford, Illinois, shows off a pompano. The Feb. 13 charter trip with Capt. Aaron Lowman produced a nice bunch of sheepshead, pompano and mangrove snapper — most caught on a jigs and live shrimp inside Tampa Bay.

Thanks to calm sunny days with temperatures in the 80s followed by a cold front dropping temps into the 50s, our weather is consistently inconsistent. However, the fishing around Anna Maria Island is holding true for February.

Typically, February means its sheepshead season around Anna Maria Island. And despite the crazy temperature fluctuations and fronts, the sheepshead are here.

To find the little buck-toothed barnacle grazers, anglers only need to go so far as the artificial reefs, wrecks and rock piles in Tampa Bay and the Gulf of Mexico. If you want to stay closer to shore, the Rod & Reel Pier, residential docks and bridges hold fish, too.

If you’re looking to target other species, try working in the residential canals. The water is typically warmer in the canals, plus, fishers are somewhat sheltered from the wind. The canals also can be deeper than the surrounding waters, which can provide a more consistent habitat for fish when we have temperature fluctuations.

Try casting live shrimp on a weighted rig along seawalls, under docks and even around mangroves and other trees hanging over the water. You’ll most likely find the catch-and-release trio of redfish, snook and trout along with black drum, sheepshead and flounder. Not bad for fishing in the backyard — from land or a boat.

On a conservation note, the Florida Fish and Wildlife Conservation Commission released an executive order this past week that extends catch-and-release measures for snook, red drum and spotted seatrout for another year in areas impacted by red tide that occurred in mid-2018 through early 2019.

All three species will remain catch-and-release through May 31, 2021, in all waters from the Hernando/Pasco county line south through Gordon Pass in Collier County, including f course Manatee County. These temporary regulation changes were made to help conserve these popular inshore species.

Capt. Warren Girle is working the inshore flats this week, putting his clients on pompano, spotted seatrout and Spanish mackerel.

Moving offshore to work structure in the Gulf of Mexico, Girle’s clients are having success on sheepshead, Key West grunts and juvenile grouper.

Capt. Jason Stock is working in the bay on windy days and reports great sheepshead action. He adds that the catch-and-release snook bite was on fire while fishing inshore.

Offshore, Stock reports a great flounder bite — and big ones too — over a dozen coming to the boat at 4 pounds in one morning of fishing. Also while offshore, Stock’s clients are hooking into kingfish and Spanish mackerel and some large catch-and-release gags and amberjacks.

Capt. Aaron Lowman says he’s finding a pretty good sheepshead bite inside the bay while working over structure. He adds that he’s starting to see bait in the bay, thanks to the warm weather we experienced before the weekend cold front.

After working the sheepshead, Lowman is taking clients into the Manatee River and around the Sunshine Skyway Bridge to hook up with some catch-and-release snook.

Finally, Lowman is working around docks and oyster beds for catch-and-release redfish and some keeper black drum.

Capt. David White of Anna Maria Charters reports successful fishing trips despite a few windy days this past week. He says the sheepshead are lined up on the local reefs, making it easy for his clients to fill the cooler for a fish fry.

White is working inshore in search of pompano. Bouncing Doc’s Goofy jigs — the sand flea color — along the bottom is resulting in hookups.

Moving a bit further offshore, White is finding Spanish mackerel, an occasional kingfish and some nice hogfish. For hogs, White is taking his anglers to drop a live shrimp directly on the bottom.

Jim Malfese at the Rod & Reel Pier is seeing anglers baiting with live shrimp reeling up numerous sheepshead to the pier deck. They’re also being rewarded with redfish, black drum and flounder hookups.

Anglers casting jigs from the pier are hooking jack crevalle and ladyfish.