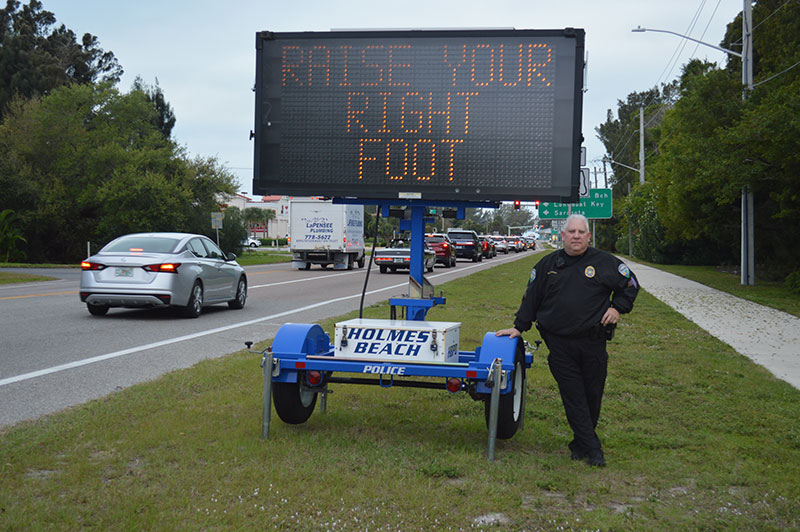 Holmes Beach Police Sgt. Tom Fraser stands Feb. 21 next to the entry sign to the city on Manatee Avenue. Fraser and other HBPD supervisors have been adding a touch of humor to the roadside electronic sign. Islander Photo: ChrisAnn Allen

“Slow down or we’re calling your mom” is one humorous — yet cautionary — message posted by the Holmes Beach Police Department on the electronic sign at the entrance to the city via Manatee Avenue.

Police Chief Bill Tokajer said Feb. 19 that several months ago the dynamic message sign was upgraded to wireless technology, allowing changes from a remote device. Previously, officers had to open the sign to add text or change the message.

Tokajer also said the modification allows the HBPD to post emergency traffic warnings, as well as national campaigns, including “Drive Sober or Get Pulled Over,” with less hassle.

So Sgt. Tom Fraser, one of four supervisors with access to the sign, decided to pepper the roadside warnings with his touch of humor.

He added that he gleaned inspiration from similar signs he’s seen on trips across the United States.

“The chief thought it was catchy and told me to run with it,” Fraser said.

Since then, the sign has hosted such messages as “A cat has nine lives. You don’t. Slow down,” and “Everyone who hates speeding tickets, raise your right foot.” Fraser even included a reference to the movie “National Lampoon’s Christmas Vacation,” with the statement, “Cousin Eddie says, ‘Slow down.’”

Another message warns about cellphone use while driving: “Twitter is full, put the phone down.”

“People seem to really like it,” Tokajer said. “I was in a meeting today and someone pulled me aside to say they appreciate the education with a touch of humor.”