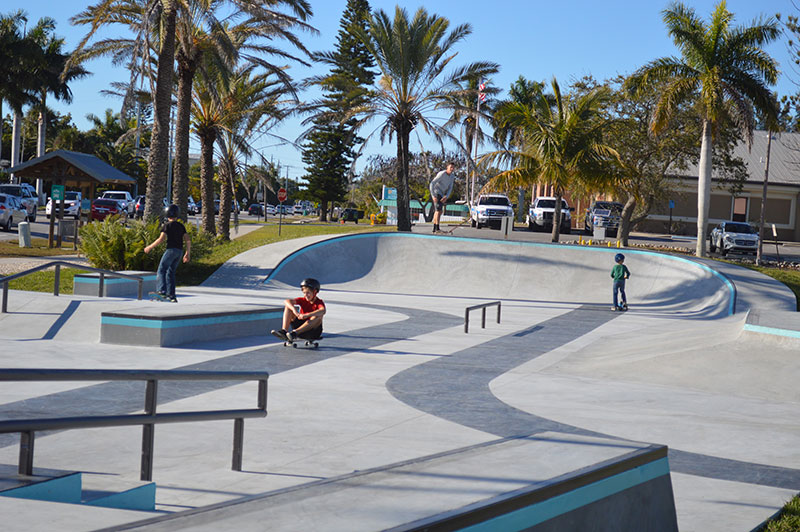 “We are thrilled to be able to skate here again,” Holmes Beach resident Rob Dellenger said Feb. 3, referring to the new skate park in Holmes Beach.

​The park’s grand opening will be 11 a.m. Saturday, Feb. 15. The new park, including the bowl, is in the Holmes Beach Community Park in the 5800 block of Marina Drive.

​Dellenger, father of three skateboarders, had been taking his sons to ride the park in downtown Bradenton since the closure of the old Holmes Beach park in 2017. “But it’s not the same as having this just up the street,” he said.

​The original skate park was built in 2003 and was partially funded by Holmes Beach philanthropists Rex and Helen Hagen, who have since passed. It was closed in 2017 for repairs.

​The “street skate” portion of the new park, designed to mimic an urban environment, cost $150,000, and includes rails, steps, pyramids and pipes. It has been open since January, but the bowl portion of the park remained closed Feb. 4.

​The bowl — similar to a swimming pool, about 4 feet deep, reinforced with steel and covered with sprayed concrete — was built for an additional $100,000, with funds and in-kind donations from the Holmes Beach community.

​Tom Sanger, owner of Sanger Pool and Spa, donated services to build the bowl. He said Feb. 3 that he volunteered to construct a concrete path connecting the street park to the bowl.

​“When the mayor suggested the addition, I asked if I could do it,” he said. “I’ve really enjoyed helping with this great addition to our community.”

​JT Thomas, Holmes Beach code compliance supervisor, said Feb. 3 there had been no problems at the park since its unofficial opening.

​“It runs itself,” he said, adding that the city is considering an initiative to give helmets to skaters.

​Thomas said he talked with people of all ages using the park. Many said they enjoy skating as a way to relax after work or school.

​ “We’re not just retirees and tourists,” he said. “There’s a community that’s been hiding and we never even knew it.”

One thought on “Opening day on deck for Holmes Beach skate ramps, bowl”