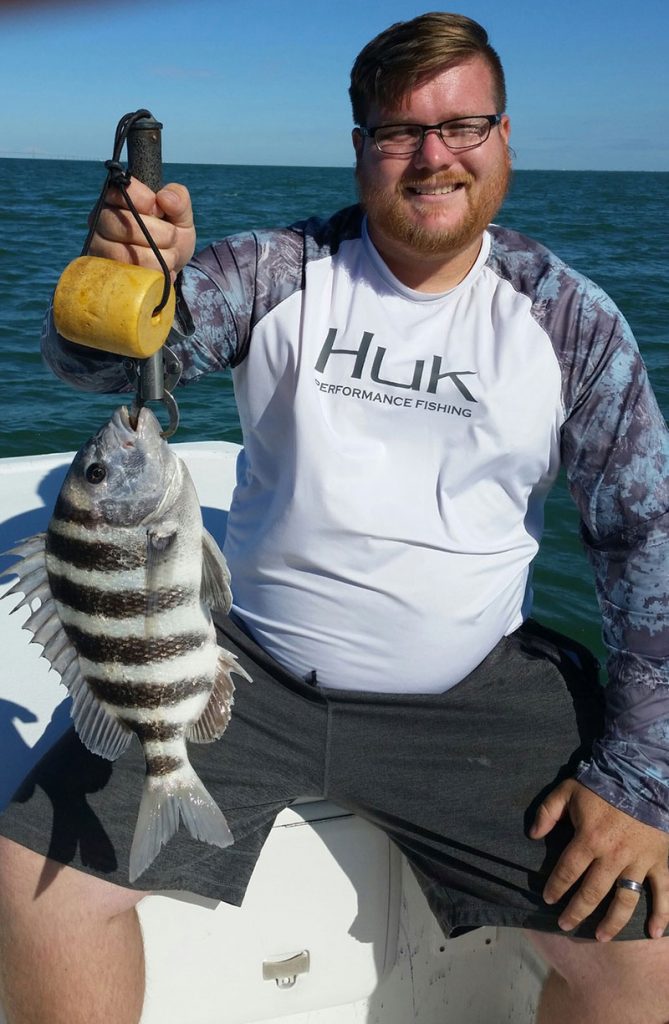 Cody Black of Palmetto shows off one of the larger sheepshead he caught Feb. 8 on a guided fishing trip with Capt. Aaron Lowman. He caught his limit of sheepshead, along with whiting, grunts and mangrove snapper for the cooler. Lowman said they worked areas of hard structure in and around Tampa Bay and shrimp was the bait of choice.

Fishing around Anna Maria Island seems to be following a trend much like the weather — unpredictable.

It has its ups and it has its downs as we seemingly experience every spectrum of Florida weather.

One day it’s in the 50s and, a day later, it’s in the 80s. Factor in some rain, wind, low pressure, high pressure and cold fronts, and it seems impossible to get a consistent read on the forecast.

As for fishing, I think your best bet is to persevere, which basically means you need to go out and fish to see what hand you’re dealt.

Fishing along the island beaches is shaping up, too. Whiting and pompano are the primary catches, with some black drum and a few small sheepies mixed in. On windier days, try fishing residential canals and docks with live shrimp as bait. Black drum, flounder, sheepshead and catch-and-release redfish take refuge in these areas during the cooler months. And it might keep you out of the chilly wind, too.

Lastly, on those warmer days, its not a bad idea to drift the deep grass flats with some soft plastics and a jig head. Casting among the sandy potholes and channel edges yields good action on pompano and catch-and-release spotted seatrout.

On my Southernaire charters, we’re catching plenty of sheepshead. Although there are some smaller ones mixed in, we’re putting quite a few 15-16-inchers in the cooler. A variety of other species are mixed in with the bite, depending on where we target the sheepies. On the structure in Tampa Bay and in the Gulf of Mexico, an abundance of small snapper, black sea bass and Key West grunts are present. While fishing along the beaches, black drum and whiting are available as well as pompano. And even the docks and canals where sheepies are present, we’re hooking up with plenty of catch-and-release redfish.

Capt. Aaron Lowman is seeing sheepshead on the rise as he works reefs, wrecks and rock piles in Tampa Bay. Sheepies in the 15-inch range are becoming more frequent with larger fish in the mix. While targeting the sheepshead, Lowman is putting anglers on Key West grunts and mangrove snapper. Fishing along area beaches with live shrimp also is producing action. Black drum and whiting are the most prominent catch, along with some smaller sheepies. Moving into the grass flats, Lowman’s clients are jigging with success for pompano and catch-and-release trout.

Capt. Warren Girle is putting pompano in the cooler by drifting and jigging over deep grass flats. Using Doc’s Goofy jigs tipped with shrimp is yielding the best action. While targeting pompano, Girle’s clients are hooking into a variety of other species — ladyfish, jack crevalle and plenty of catch-and-release spotted seatrout. Moving to residential docks and canals is providing good action. Rigging with a knocker rig and casting whole, live shrimp in these areas is resulting in numerous catch-and-release redfish, as well as keeper-size black drum and sheepshead.

Lastly, while fishing structure in the Gulf, Girle is seeing more and more sheepshead as the season progresses.

Capt. Jason Stock says big amberjack are the highlight for his charters this week. Fishing over structure in the Gulf of Mexico is producing AJs up to 100 pounds.

Large goliath grouper are in these areas. Goliaths in excess of 200 pounds are being reeled up for client photo opportunities. For those wanting to bring home something for dinner, Stock is leading them to a great bite on porgies, Key West grunts, mangrove snapper and red grouper. His anglers also are seeing a lot of catch-and-release gag grouper.

Capt. David White of Anna Maria Charters is fishing offshore on the less windy days. Fishing hard bottom areas for red grouper is paying off for White’s clients, with some catches reaching 20 pounds. Mixed in are mangrove and lane snapper, which nicely round out the bite. Moving inshore, White’s anglers are catching sheepshead around structure in Tampa Bay, where live shrimp as bait is working well. Also while inshore, White is finding black drum and catch-and-release redfish, as well as a good pompano bite.

Jim Malfese at the R&R Pier is seeing the sheepshead numbers rise. Pier fishers using live shrimp as bait are hooking into these popular pier dwellers. Most are running just barely legal — 12-13 inches — although a few larger fish are being reported. While using shrimp as bait, pier fishers also are catching black drum, flounder and catch-and-release redfish.