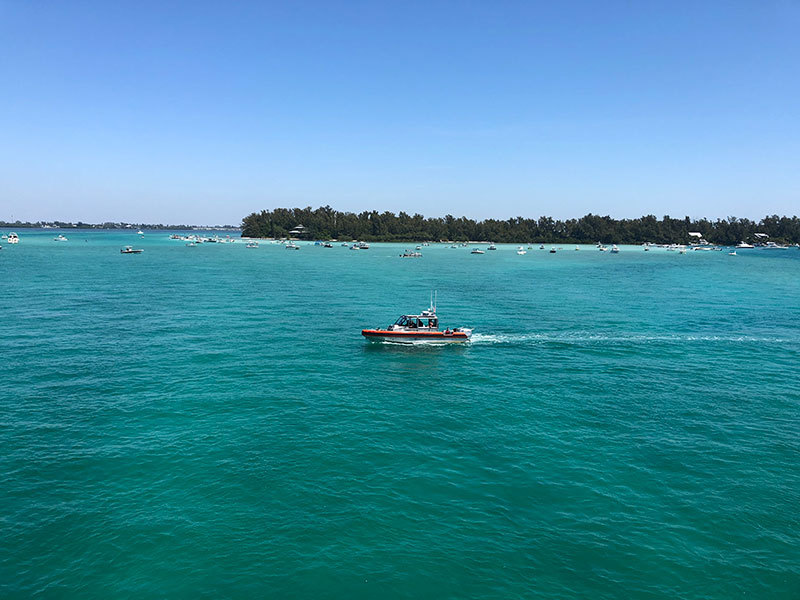 Boaters anchor between the Longboat Pass Bridge and Jewfish Key at the south end of Anna Maria Island as a U.S. Coast Guard crew patrols in the foreground. Islander Photo: Scott Moore

Fishing guides hoping to meet clients and launch are being put off at the boat ramps.

Manatee County commissioners held an emergency meeting March 24 in a reaction to reports of people rafting and beaching aboard boats on the shoreline of Longboat Key.

While the county’s preserves and most parks remained open for recreational activities, the county restricted access March 26 to Beer Can Island — also known as Greer Island — at the north tip of Longboat Key and closed boat ramps.

The boat ramp closures included Coquina Bayside in Bradenton Beach as well as Kingfish Boat Ramp and the city ramp at 63rd Street, both in Holmes Beach.

The county previously had restricted access to public beaches, closing parking lots at Coquina Park and the Manatee Public Beach in an effort to prevent crowding amid the COVID-19 outbreak.

One of the Coquina boat ramps is open to commercial fishers who exhibit saltwater product licenses but, charter guides, who possess a U.S. Coast Guard a six-pack license, are prohibited by the county declaration. Fishing guides were reportedly turned away from the ramp at Coquina.

Local guide Scott Moore fielded some phone calls about the closure from guides and rode his bike to Coquina Beach from his residence in Holmes Beach to check out the closure.

Moore was named in 2019 to the Agricultural Hall of Fame for his ocean stewardship and 50-plus years as a licensed fishing guide.

Moore called The Islander with a complaint about officers at the boat ramp who were only allowing commercial fishers who could exhibit a saltwater license to use the ramp. He believed the county board of commissioners had exempted licensed charter guides from the order that closed the boat ramps.

But messages between Moore, The Islander and County Commissioner Carol Whitmore wound up in some confusion — as she thought Moore was correct and the guides could use the ramp.

Whitmore voted for the ramp closure.

However, clarification came from Whitmore, who soon determined the guides were prohibited from launching their boats.

Moore continued his bike ride across the Longboat Pass Bridge and found no boaters at Beer Can Island, but plenty of boats were observed — all appropriately distancing the ordered 50 feet — along the sandbar between the east side of the bridge and Jewfish Key.

“There was no problem there that I could see,” Moore said. “Everyone was complying.”

After the county closed the ramps, the Florida Fish and Wildlife Conservation Commission ordered on March 27 that recreational boaters must stand off at least 50 feet from other boats and limited people onboard to 10.

There was plenty of enforcement present on the waters, Moore noted, including U.S. Coast Guard and FWC crews motoring through the ICW.

Moore contends Beer Can could have been managed by FWC enforcement and closing the boat ramps amounted to a knee-jerk reaction.

County commissioners were expected to decide April 2 whether to continue the closures in the March 24 emergency declarations.

And Moore said he planned to be there to protest for the fishing guides who don’t keep their boats in the water and need the ramps to make a living.

He said, “Only the rich can be on the water.”