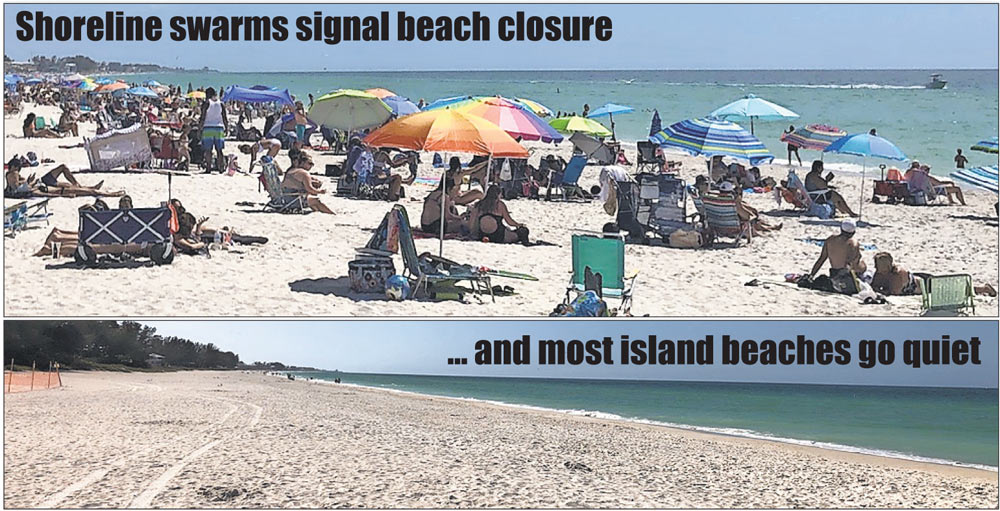 The Manatee Public Beach is busy with clustered families and groups March 19 up and down the beach, but an announced government closure the next day, March 20, resulted in the quiet beach pictured below. islander Photos: courtesy HBPd chief Bill tokajer 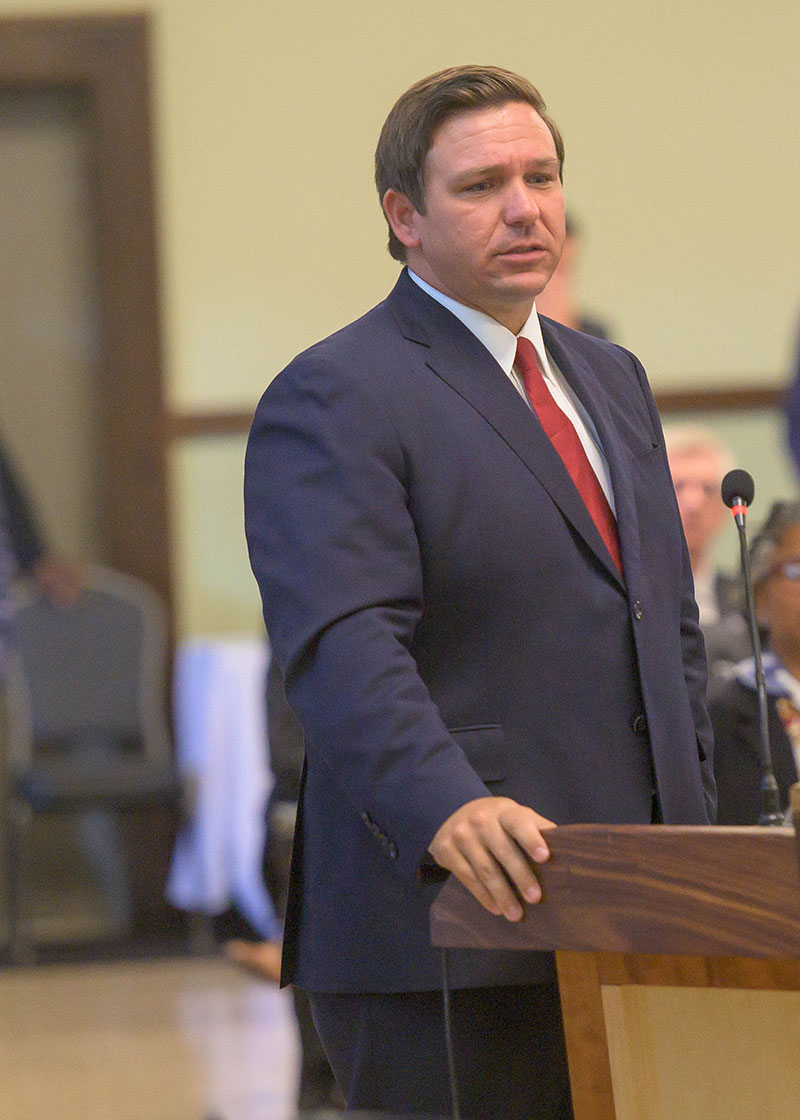 Florida Gov. Ron DeSantis issued a series of executive orders to deal with the spread of COVID-19, the new coronavirus, the week of March 16. Islander Photo: Courtesy Florida Governor’s Office 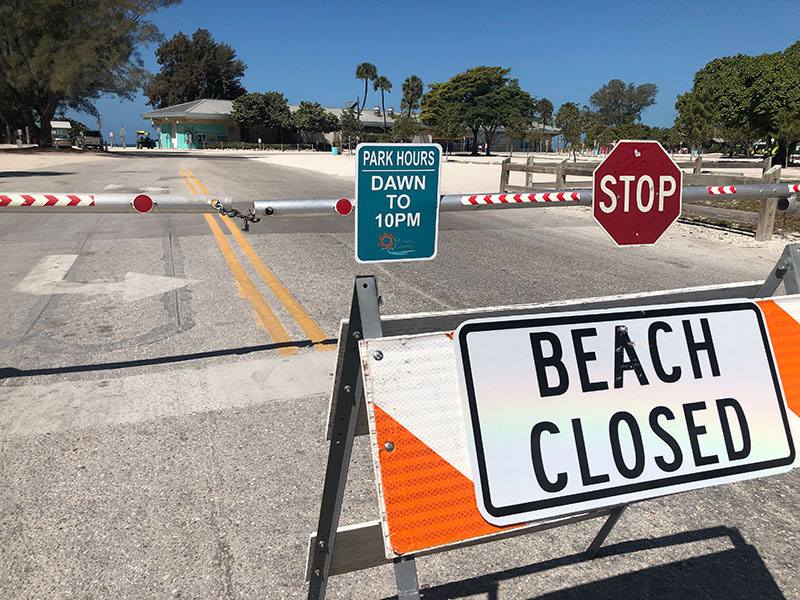 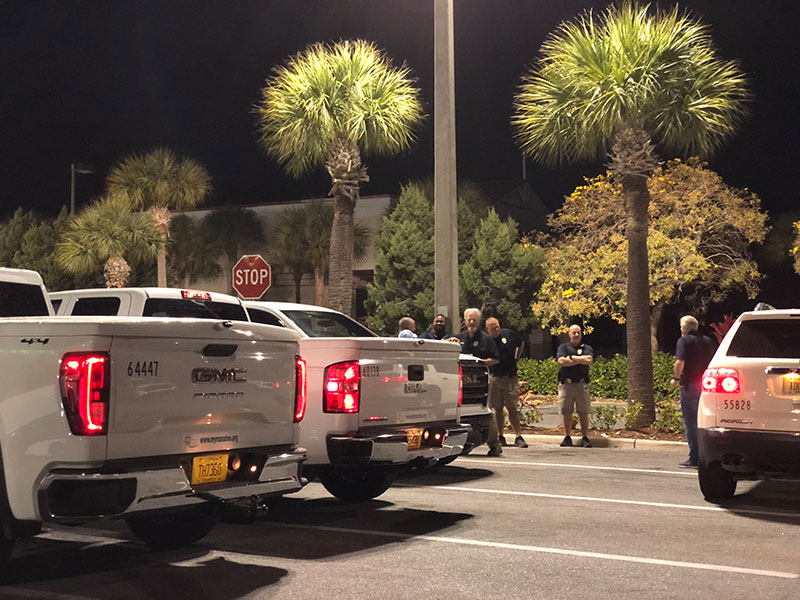 Manatee County code enforcement officers assemble about 5:30 a.m. March 20 in the Publix Super Market parking lot in Holmes Beach. The officers were to assist in monitoring the public beaches, as a closure went into effect at 6 a.m. that day. Islander Photo: Lisa Neff

The local fight against the spread of COVID-19 has ratcheted up to meet the crisis.

The cities of Anna Maria, Bradenton Beach and Holmes Beach, as well as Manatee County, declared states of emergency March 16-17, granting the local governments additional powers to enact measures to mitigate the pandemic — and to seek aid in the post-pandemic phase, when it comes.

The state emergency was declared March 9.

The declarations come as confirmed cases of the coronavirus in Florida continued to skyrocket. There were 1,007 confirmed cases across the state as of March 23 — up from 136 on March 16 — including 13 Manatee County cases, according to the Florida Department of Health.

After spending the previous week installing hand sanitizer in public buildings to counter the virus’ spread, the municipalities began applying emergency powers to restrict access the week of March 16.

While government operations continued, all three island cities closed buildings to the public. City staff posted closure notices at the entrances, asking people to contact them by phone, email, fax or by visiting their websites.

The cities also canceled nonessential meetings and made plans to conduct virtual meetings to prevent the potential spread of the virus among officials and staff.

Such meetings normally would violate the Florida Sunshine Law, which guarantees open meetings, however, Florida Gov. Ron DeSantis gave an executive order March 20 to temporarily suspend state statutes requiring a physical quorum for a governing body to meet, as well as allowing municipalities to use communications technology to conduct virtual meetings.

DeSantis also ordered the closure of gyms and fitness centers and suspended all restaurant dining room service and alcohol consumption.

Manatee County’s decision to close beaches to the general public March 20 until further notice was another measure to mitigate the virus’ spread.

Parking for the beaches, including Coquina Beach, Cortez Beach and Manatee Beach, was blocked by barricades and notices.

Manatee County Sheriff’s Office deputies and county code enforcement officers were stationed along the beaches and at access roads to educate people and encourage social distancing.

Manatee County information outreach manager Nicholas Azzara, during a March 20 news conference, said despite the increased presence of officers on the beaches, the closures were intended to be self-policed.

“We are relying on our residents and visitors to make a good-faith effort in heeding those warnings,” Azzara said. “There should be no mixed messages: We’re asking people to avoid the beaches.”

Manatee County Sheriff Rick Wells said, “We are not out there trying to incarcerate people for being on the beach. We are asking for voluntary compliance.”

Wells added — to quell rumors he’d seen on social media — there were no plans to enact martial law and lock down or force residents to stay in their homes.

According to an official message posted on Anna Maria’s website, www.cityofannamaria.com, “although our beaches remain closed to the general public, they are open to residents and their guests while practicing safe social distancing.”

Another message on the website cautioned people against visiting the city during the pandemic, noting the beach closures and restaurant limitations.

Bradenton Beach Police Lt. John Cosby said the parking closures were intended to reduce the number of tourists and other visitors accessing the beaches — not to prevent residents from enjoying the beach on private property.

“We’re going to get to the point where people start going stir-crazy,” he said. “So we want to make sure we have enough people on duty to handle something if it comes up.”

Cosby added there were no plans to limit access to the island. He said there were discussions about setting up a checkpoint and monitoring people entering the island, but some officials from the island cities and Longboat Key opposed the idea.

Bradenton Beach Mayor John Chappie said the island mayors were communicating daily with each other and the county to coordinate a unified response against the virus.

“We’re all in this together, and we’re going to get through it,” Chappie said. “We are a strong nation and a strong community.”

Reduce risk of infection by:

For more information on coronavirus in Florida, visit the health department’s COVID-19 webpage at www.floridahealth.gov/covid-19.