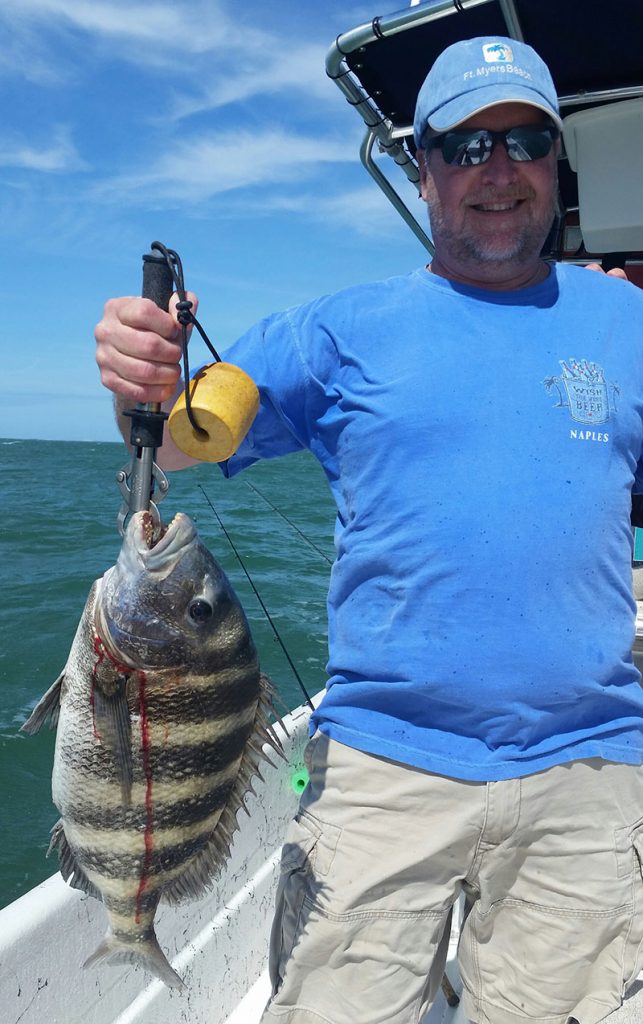 David Reed of Iowa shows off an 8 pound 8 ounce sheepshead he caught on live shrimp in Tampa Bay Feb. 24 on a charter with Capt. Aaron Lowman. Lowman said the sheeps were running “dang big” and that Reed and his buddies also caught and released a “mess” of seatrout and bluefish. 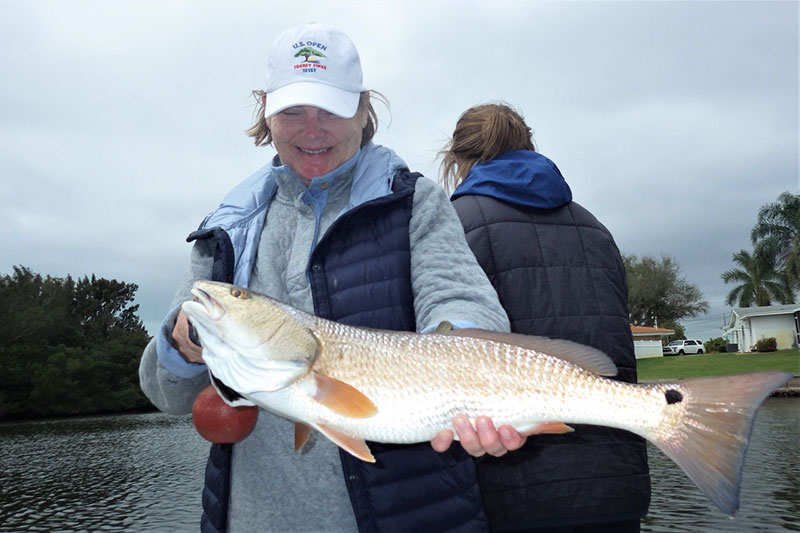 Suzy Hicks, visiting the area from Chicago, smiles Feb. 21 as she holds a redfish before releasing it back to the water. Hicks and her family caught and released several redfish using live shrimp for bait on a charter fishing trip with Capt Warren Girle.

With numerous windy days this past week, most fishing around Anna Maria Island was occurring in the sheltered waters of Tampa Bay and surrounding smaller bays, with sheepshead coming in as the week’s highlight.

Fishing along the beaches with shrimp-tipped jigs is a good bet. Pompano, whiting and ladyfish are being caught, as well as some jack crevalle and black drum.

Boaters are finding pompano by drifting and jigging over deep grass flats. This scenario is yielding a variety of other species, including ladyfish, jack crevalle, bluefish and numerous catch-and-release spotted seatrout.

Lastly, on the warmest days — between cold fronts — anglers casting live free-lined shiners are hooking up with a bevy of catch-and-release snook and redfish.

Capt. Warren Girle is finding a variety of fish for his clients by drifting and jigging over deep grass. In calmer areas, where fairly clear water exists, bouncing a shrimp-tipped jig through sandy potholes mixed in the patches of grass is resulting in pompano, ladyfish, jack crevalle and numerous catch-and-release spotted seatrout. The pompano — being the prize catch on this drift — are frequently taking a hook, along with the other species.

On windier days, where drafting is futile, Girle is taking shelter in residential canals. Casting live shrimp on a bottom rig around docks and seawalls is attracting many catch-and-release redfish, as well as keeper black drum and sheepshead. A handful of catch-and-release snook also are present in these areas.

Capt. Aaron Lowman is putting clients on an abundance of sheepshead throughout Tampa Bay and the Gulf of Mexico. Fishing structure — artificial reefs, wrecks and other debris — is proving productive for sheepies. Using live shrimp as bait is attracting sheepshead in the 2- to 4-pound class to the hook with some catches reaching whopper size — 8 1/2 pounds.

On the warmest days, Lowman is finding a good catch-and-release snook bite for his sporting clients. Casting live free-lined shiners around mangrove edges and in potholes is resulting in many 20-26 inch fish.

Moving out to deeper grass areas is producing action on the warmer days. Casting soft plastics on a jig head is producing many catch-and-release spotted seatrout, as well as jacks, ladyfish and keeper pompano.

On calm warm days, Capt. Jason Stock is venturing out to some of the offshore wrecks to get his permit fix. Casting live crabs in these areas is raising permit from the wrecks toward the surface to take a bait.

While inshore, Stock is putting anglers on flounder around wrecks and reefs. And, even farther inshore, on the flats and around mangrove islands, Stock is putting clients on action from the catch-and-release trio, snook, redfish and spotted seatrout. For these species, the higher stages of the tide are working best, according to Stock. Water temps on the higher end of the spectrum during the day also are a plus.

Jim Malfese at the Rod & Reel Pier says sheepshead are dominating the bite in Tampa Bay. Pier fishers using patience and live shrimp on a bottom rig are finding success. Knowing where to fish and when to set the hook is key. Near limits of sheepies are being caught by veterans, but even novice anglers are reeling up a couple of fish. While targeting the sheepies with live shrimp, pier fishers are hooking into an occasional whiting, as well as snapper, black drum and catch-and-release redfish.

Capt. David White of Anna Maria Charters is running to the offshore ledges when the winds and seas are calm. He says using live shrimp is attracting variety to the hook, including hogfish, porgies, mangrove snapper and Key West grunts. Fishing wrecks offshore also is providing action — especially on permit.

Moving closer to shore, fishing structure in Tampa Bay is resulting in limits on sheepshead. Most catches are 15-18 inches, although White is seeing anglers land fish up to 22 inches.