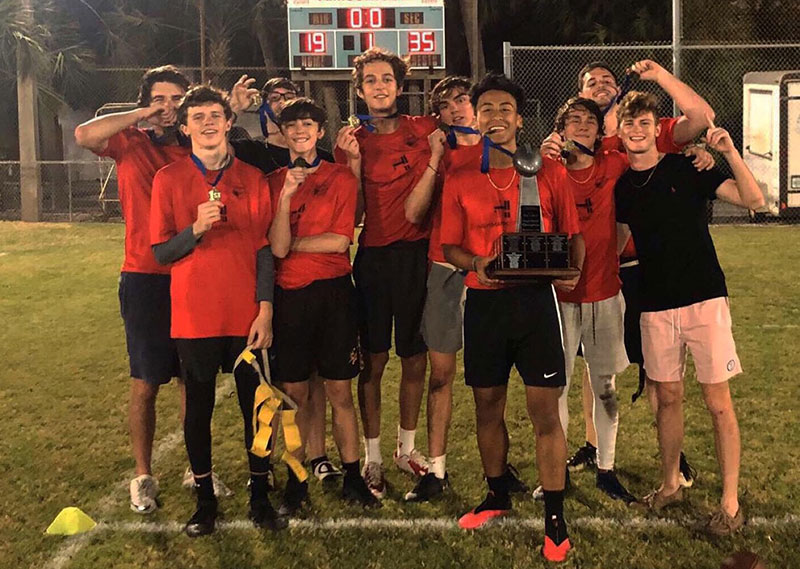 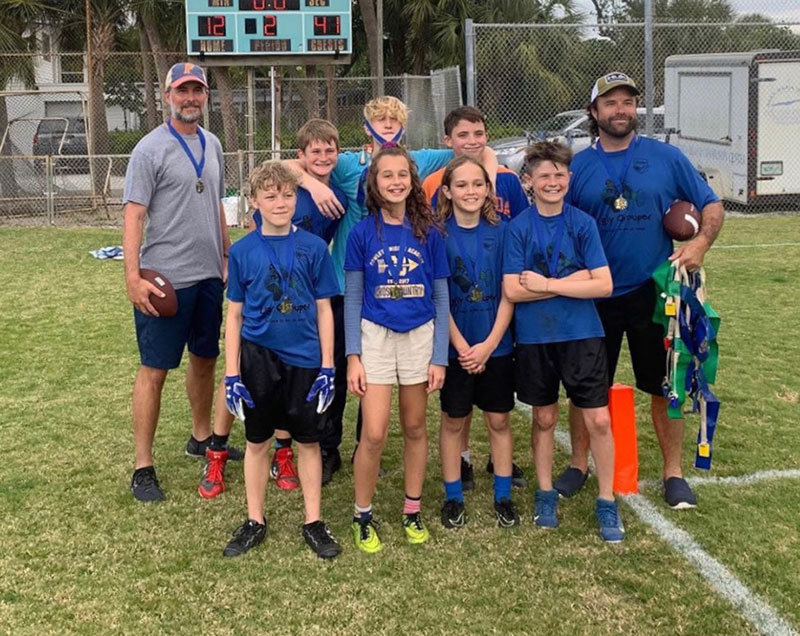 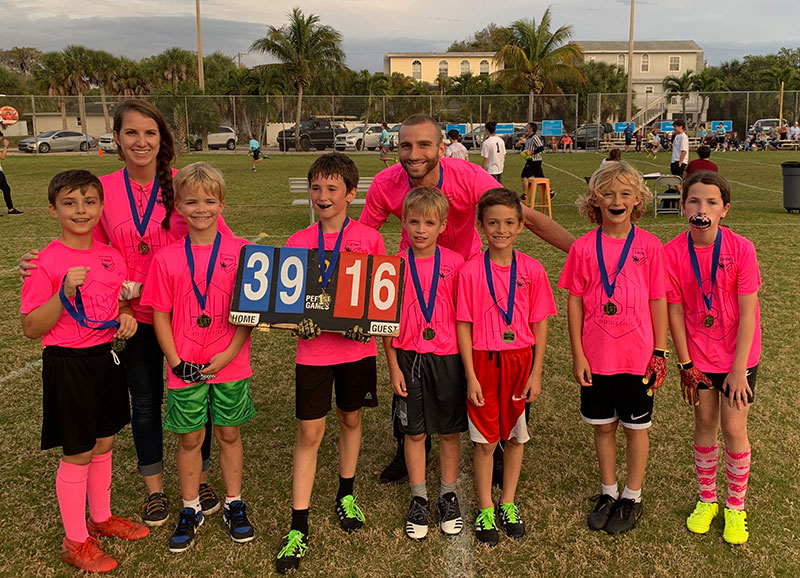 Championship night in the youth flag football league at the Center of Anna Maria Island was March 10 and games were followed by awards aplenty for the season.

Three age groups competed in the league with games played on the center field.

The 8-10 division MVP went to Peyton Hovda of Cool Today, while HSH Design’s Savanna Coba captured the female prize for MVP. Swordfish Grills’ Cale Rudacille was the recipient of the sportsmanship award, while Noah Rigney of HSH Designs earned the most improved player.

The night got started with a championship game between Ugly Grouper and Slim’s Place, with the Grouper rushing past Slim’s 41-12, behind four rushing touchdowns from Ashton Hovda and a touchdown run each from Gabriella Gilbert and Brennan Gunter. Jackson Zoller added a pair of extra points and Mikey Coleman added one in the victory.

JM Feeney ran for a touchdown to lead Slim’s in the loss and also received a touchdown pass from Nick Yatros to Jaxson Rush.

MuniPlan was led in the loss by Tuna McCracken’s two touchdown runs.

After four weeks of adult soccer action in the gym at the Center of Anna Maria Island, Duncan Real Estate, with a 4-0 record, holds a half-game lead on 3-1 Pool America. Slim’s Place follows at 2-2, while Sato Real Estate, Gulfview Windows & Doors and Ross Built follow with matching 1-3 records.

Kevin Roman’s five goals and two goals each from Brayan Felipe and Chris Culhane paced Slim’s Place in the loss.

Pool America swam past Gulfview Windows and Doors 17-8 behind six goals from Chris Scott and four goals from Andrew Sullivan. Chris Klotz added three goals and 12 saves for Pool America in the victory.

The last game of the evening was a defensive struggle between Duncan and Sato that ended with an 11-6 score behind six goals from Damir Glavan and two goals and two assists from Joey Hutchinson. Robb Marshall made 22 saves to close out the victory.

Steve Velliquette and Sean Flynn scored two goals each to lead Sato in the loss.

After seven weeks of season action, the adult flag football seedings are final and playoff matchups are set for the March 26 quarterfinal games.

Team Bob — Bob Rowley and Bob Palmer — earned the day’s title with a 21-12 victory over Dom Livedoti and Norm Langeland.

Three teams advanced to the knockout stage during March 14 action. Rowley and Tom Farrington drew the lucky bye into the finals and watched as Rich Brozi and Rod Bussey advanced with a 21-17 victory over Neil Hennessey and Bob Lee. The final was a close, back-and-forth affair that saw Brozi and Bussey outlast Rowley and Farrington 21-19 to truly earn the day’s bragging rights.

Wayne Patterson dominated with a score of plus-7, three points ahead of Jon Holcomb and Jack Lowry, who finished in a tie for second with matching plus-3s.

Patterson also was the main cog in the first-place team of Dale Hudson, Dave Rinkey and Bob Soos that combined on a plus-7.

Judy Christensen grabbed first-place honors in Flight A with a 1-over-par 33, two strokes ahead of a trio of second-place finishers, MaryLou Dreier, Carol Patterson and Roxanne Koche.

Flight B was captured by Sue Christenson on a 2-under-par 30. Annette Hall was alone in second with a 1-over-par 33, while Gloria LaDue was another stroke back in third.

Terry Westby carded a 5-under-par 27 to take first place in Flight C and tie for low round of the day. Peggi Clauhs took second place in the flight with an even-par 32.

The men were back on the par-32 course March 12 for the week’s nine-hole scramble. The team of Art McMillan, Larry Pippel and Larry Solberg combined on a 3-under-par 29 to earn clubhouse bragging rights for the day.

Adults can now register for spring soccer and basketball at the center.

The fee for outdoor soccer is $10 for members and $106 for nonmembers. The last day to register will be April 2.

Evaluations will be held on the field at 6 p.m. Thursday, April 2, and the schedule of games will start Wednesday, April 8, though the rest of the season’s games will be played Thursdays.

Basketball registration continues until Monday, April 6, with the season starting Monday, April 13. The fee to play is $10 for members and $96 for nonmembers.

Players can register online at centerami.org or in person at the center, 407 Magnolia Ave., Anna Maria.