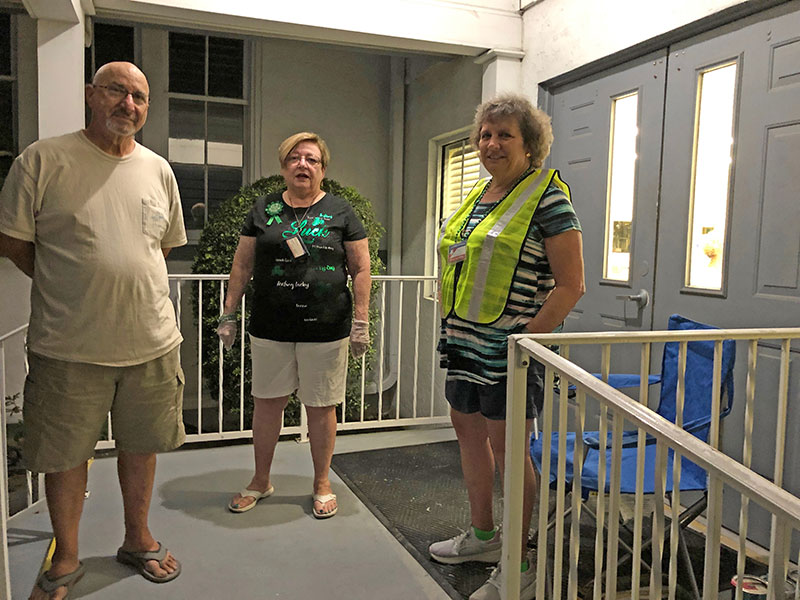 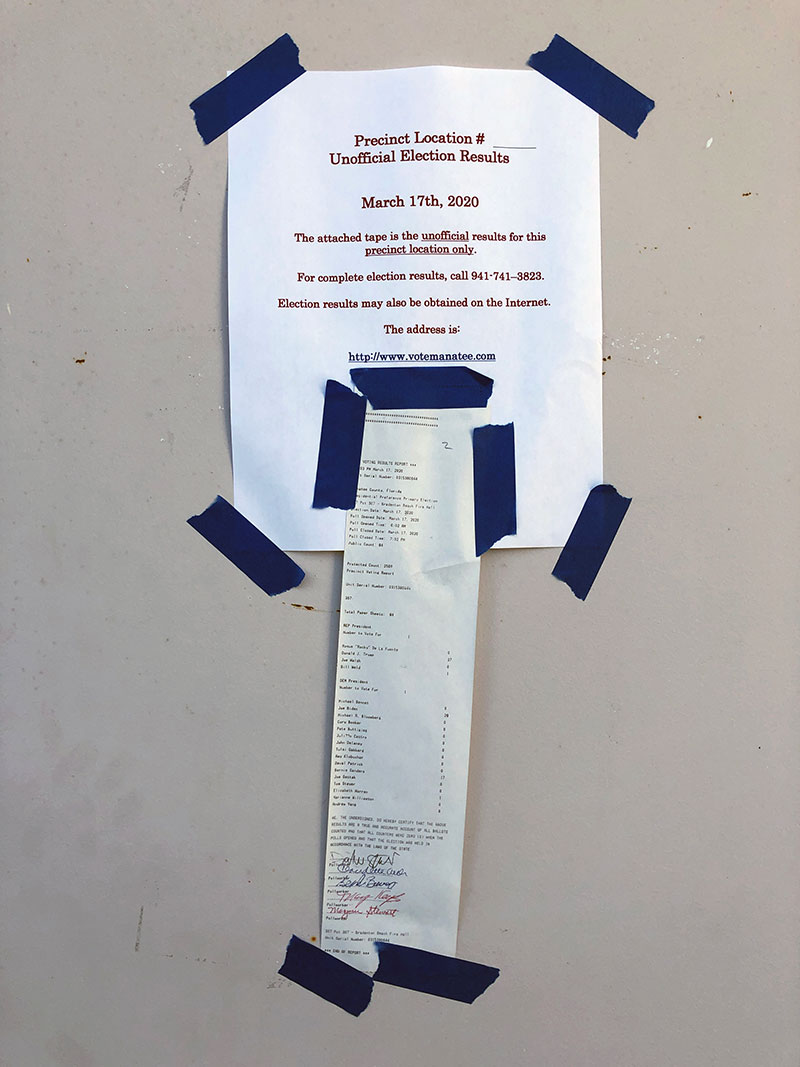 Keeping a tradition, the results of the Florida Presidential Preference Primary are posted to the door of the Bradenton Beach Fire House, where voters in precinct 307 cast ballots March 17. Islander Photo: Lisa Neff

Barbara Ehren put on her surgical gloves and kept her primary obligation March 17.

Ehren was the first to the ballot box at Anna Maria’s precinct 301, casting her vote in the Florida Presidential Preference Primaries.

She arrived to the polling place at Roser Memorial Community Church, 512 Pine Ave., shortly before 7 a.m., wearing gloves as a precaution against the new coronavirus and the spread of COVID-19.

“Passion,” Ehren said brought her out on primary day.

Second in line was husband Tom.

They were greeted by a first-time election deputy Amy Krueger, outfitted with sanitizing wipes, three beverage mugs and a beach chair.

“I’ll open the door,” Krueger told the voters, who kept their distance.

Islanders also went to the polls in Bradenton Beach and Holmes Beach to find ballots and sanitizer and occasionally lines to vote.

Islandwide, their choices aligned with the state’s and, for the most part, other states, with former Vice President Joe Biden garnering the most votes on the Democratic side and President Donald J. Trump accumulating the highest numbers for the GOP side.

Republican voters went 91.03% for Trump and the next highest vote-getter was former Massachusetts Gov. Bill Weld, who received 4.49%.

But turnout was slightly higher in three of the island’s four precincts.

Turnout in Manatee was higher in the 2016 presidential preference primary at 53.21% but the choices were different then, as nominations in both parties were still hotly contested.

Like Barbara Ehren, other islanders said they went to the polls March 17 because they are passionate about politics, devoted to democracy and committed to candidates.

But more than a few — keeping their distance from the reporter — said they might switch to voting by mail before the Nov. 3 general election.

Holmes Beach’s precinct 303 has 1,278 registered voters, including 328 Democrats and 646 Republicans.

Holmes Beach’s precinct 305 has 1,451 registered voters, including 418 Democrats and 630 Republicans.

Bradenton Beach’s precinct 307 has 745 registered voters, including 226 Democrats and 308 Republicans.