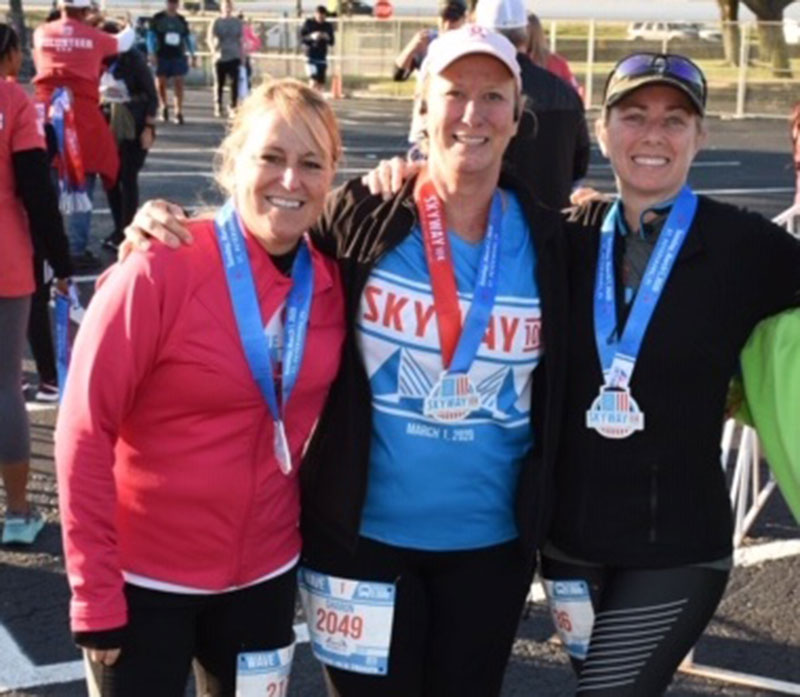 Sue George, left, of Anna Maria, and Sharon Burgess and Kelly Joseph of Bradenton ran the Skyway 10K March 1 and lived to tell about it. Islander Courtesy Photo: Courtesy 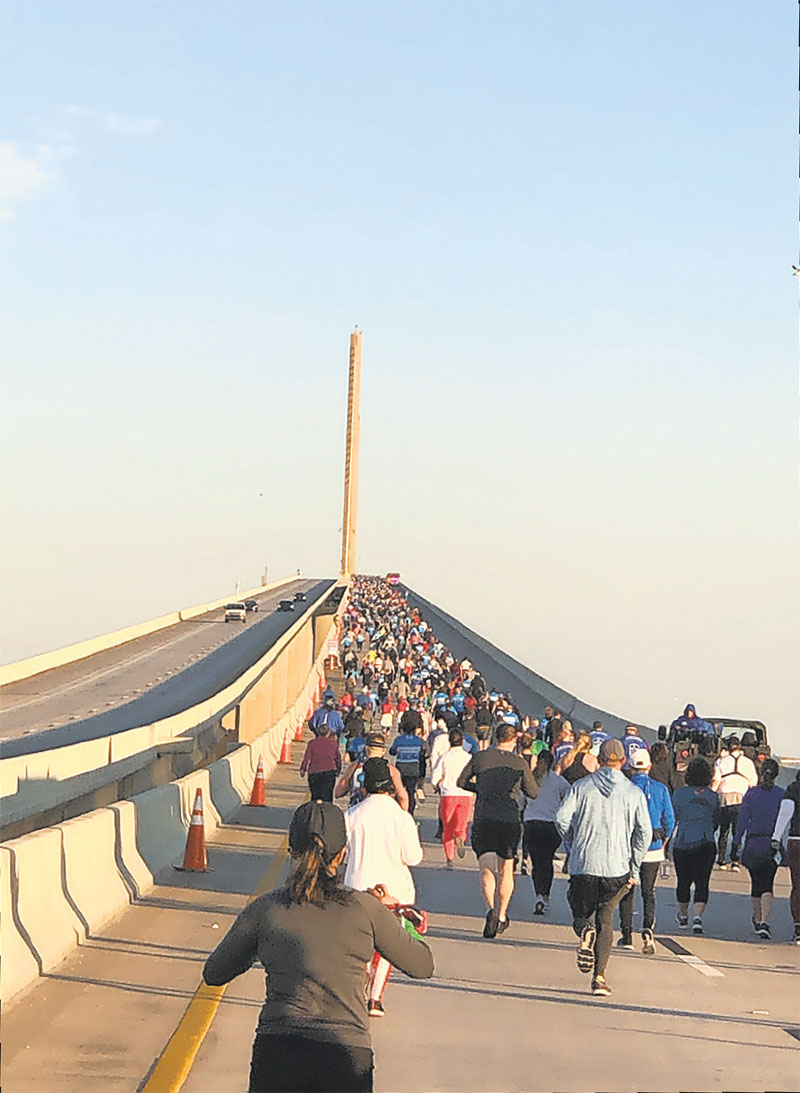 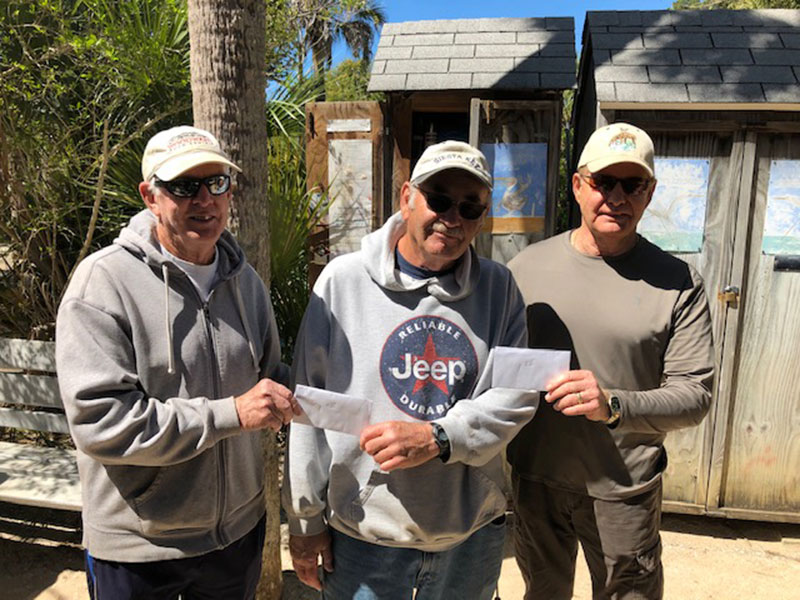 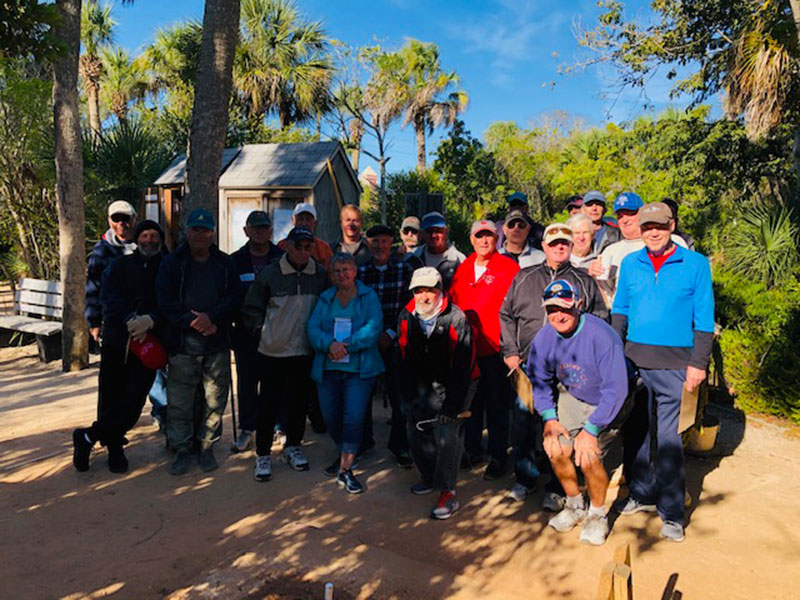 With 8,000 participants, Meneley said the logistics of the race were astonishing. Participants assembled at Tropicana Field in St. Petersburg in a corral to await one of the hundreds of school buses to carry them to the south side of the bridge in Manatee County, where they were placed in three “waves” for three starts.

Meneley told The Islander that as she ran the first few miles, the “hill” loomed ahead. “The amazing thing is that as you run up the bridge and are passing the yellow cables, you think you’re at the top, but no, the climb continues. Then, all of a sudden your legs feel relief and you head down the bridge to the finish, where you immediately board buses to return to the Trop.” At the baseball stadium, food, refreshments and music were on tap.

No times were provided for the other local runners, but just making it across the bridge is a feat. With the main span 200 feet above the water and a slope of 4%, it can’t be an easy run.

The money raised by the race goes to the Armed Forces Families Foundation, with $1.2 million raised, not including this year’s race.

Congratulations to our local runners for taking on the Skyway and supporting a worthy cause.

March 3 saw semifinal action in the youth flag football league at the Center of Anna Maria Island and some major upsets in the 8-10 and 11-13 divisions. For the 14-17 division, the seedings held.

The upset bug bit in the first 8-10 division semifinal game between No. 1 Moss Builders and No. 5 Cool Today. Cool Today cooled the builders by a 46-30 score behind six rushing touchdowns from Peyton Hovda. Hovda also added a pair of 2-point conversions and tacked on a pick six for good measure. Chad Nunez completed the Cool Today scoring with a pair of 2-point receptions in the victory.

The second semifinal game March 3 saw No. 2 seed HSH Designs edge No. 3 Diamond Turf by a 23-18 score. Quarterback Charlie Neri connected with Connor Samblis on a touchdown pass while Savanna Coba added a touchdown run. Lucas Signor completed the scoring with a pick six to lead HSH Designs to victory.

Carson Clover helped keep Diamond Turf in the game with three touchdown passes, two to Parker Meyers and one to Maddox Culhane.

JM Feeney ran for two touchdowns and added a 2-point conversion to lead Slim’s Place, which also received a touchdown pass from Nick Yatros to Jaxon Rush to complete the scoring in the victory.

The final shocker of the evening came as No. 4 seed Ugly Grouper eliminated No. 1 Progressive Cabinetry on a final score of 13-2. Aiden Templeton threw a touchdown pass to Brennan Gunter and Ashton Hovda added a rushing touchdown to lead Ugly Grouper to victory.

Kevin Shook gave Progressive Cabinetry its only score on a safety, a flag pull on Aiden Templeton in the end zone.

Normalcy returned in the 14-17 division as the top seeds in both semifinal games prevailed.

No. 2 Hashmark Sports opened the action for the 14-17s with a 28-6 thrashing of Killer Bait behind three touchdown passes from Ian Godfrey, including two to Nate Costello and one to Shawn Balvin.

Ben Barreda connected with Cole Carter for the lone touchdown by Killer Bait.

No. 1 seed MuniPlan rolled to a 26-0 victory over No. 4 seed Gulf Drive Cafe behind a pair of touchdown passes and a rushing TD from Tuna McCracken. Tyler Brewer and Blake Balais each had a TD reception in the victory.

The championships were set for March 10, after press time for The Islander, with Slim’s Place taking on Ugly Grouper in the 11-13 division at 6 p.m., followed by Cool Today and HSH Designs meeting in the 8-10 division championship game at 6:30 p.m. The championship schedule was set for a 7:30 p.m. finale between 14-17 division MuniPlan and Hashmark Sports.

With only one week of the regular season left to play in the adult flag football league at the center, Moss Builders holds down the top spot in the standings on a 5-1 record, while second place is crowded. Firkins Automotive, Rays Ramblings and Lancaster Designs all sport 4-2 records and Beach Bums holds down fifth place with a 3-3 record. Slim’s Place and Capt. Sky Cruises are holding down sixth and seventh place with matching 2-4 records. Ugly Grouper is alone in last place, and still seeking a victory.

Five teams earned 3-0 records in pool play and battled it out for the day’s championship during March 4 horseshoe action at the Anna Maria City Hall horseshoe pits.

The first bye went to Rod Bussey and John Crawford, who watched as Rich Bee and Bob Lee eliminated Bob Mason and Steve Doyle 23-13, while Tim Sofran and Tim Farrington advanced with a 22-13 victory over Adin Shank.

The seventh-annual Ron Pepka Memorial Horseshoe Tournament was played March 7 at the city pits. Adin Shank and Tom Farrington won the tournament with a 22-15 victory over Jerry Disbrow and Tom Skoloda.

Action on the Key Royale Club links in Holmes Beach got started March 2 with the men playing a nine-hole modified-Stableford system match.

Tyan was part of the winning team of Dale Hudson, Ken Nagengast and Bob Soos on a plus-7.

The women took over the course March 3 for a nine-hole individual-low-net match in four flights.

Jenny Huibers fired a 1-under-par 31 to win the top spot in Flight A by three strokes over Diane Miller.

Sue Christenson carded a 2-under-par 30 to earn a 1-stroke victory in Flight B. Roxanne Koche, who birdied the third hole, was alone in second with a 1-under-par 31.

Judy Menchek’s even-par 32 gave her first place in Flight D, a stroke ahead of Eileen Witzgall and Monica Lawson, who tied for second place.

Laney Davis chipped in on the seventh hole, while Marty Clark had a birdie on the eighth hole to round out the week’s action at the club.