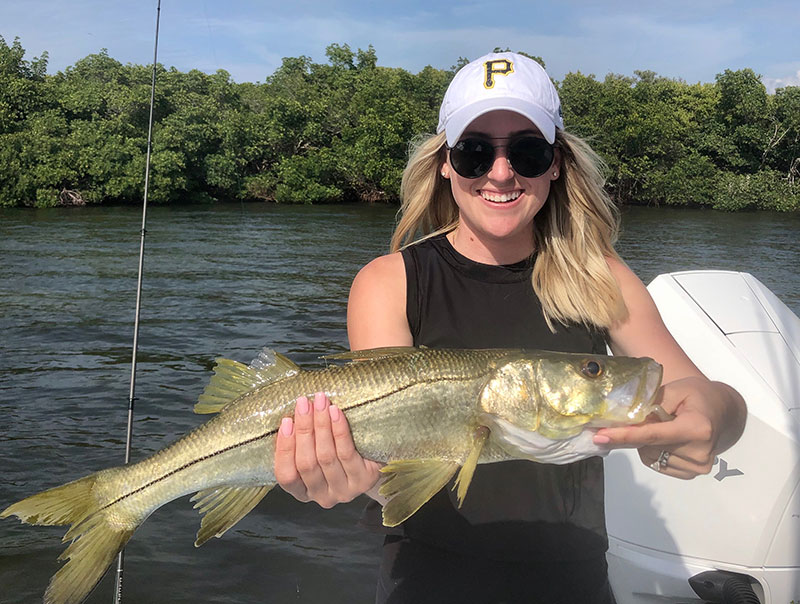 Shayne Newman, wife of Pittsburgh Pirates shortstop Kevin Newman, shows off a nice snook she caught March 3 using a live pilchard for bait while on a charter fishing trip with Capt. David White of Anna Maria Charters. The fish was released after the trophy photo op. 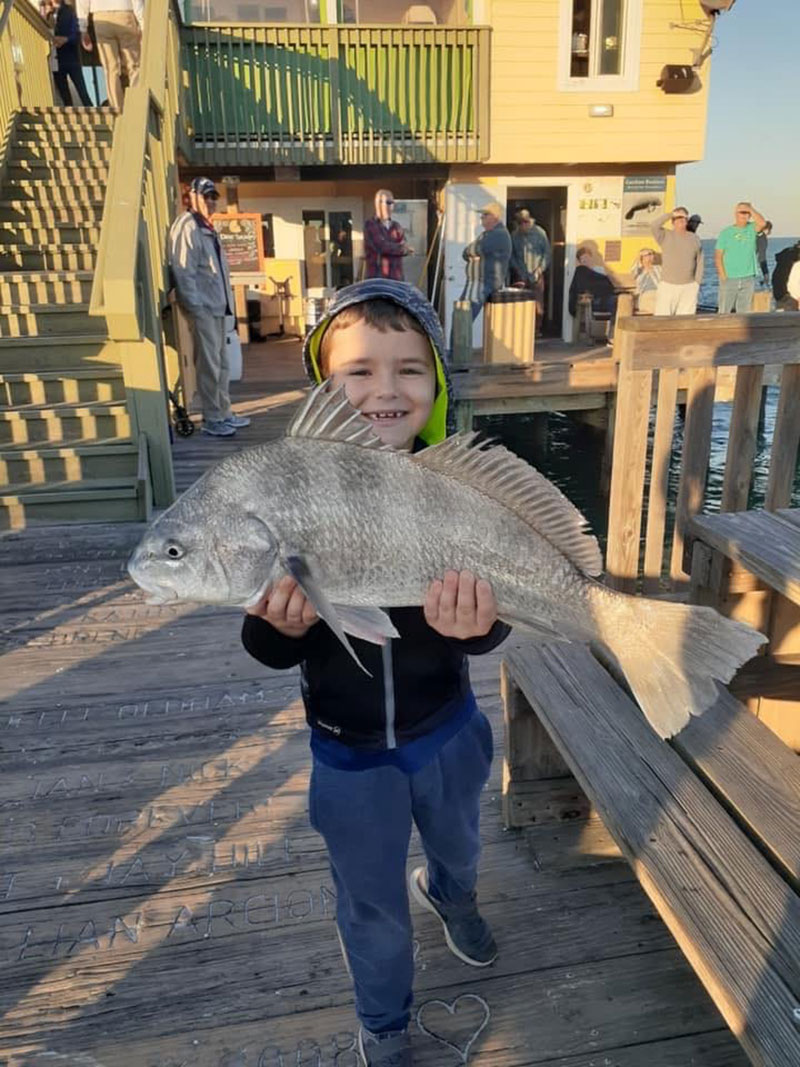 “Salty Sol” shows off a big black drum he caught Feb. 27 while fishing at the Rod & Reel Pier in Anna Maria. Luther Sasser, 8, comes from a “fishing family” and lives in Holmes Beach.

Fishing the flats of Anna Maria Sound with live shiners as bait is producing the popular trio of catch-and-release species, snook, redfish and trout. For the snook and reds, fishers are casting free-lined shiners along mangrove shorelines and oyster bars during higher stages of the tide. For the spotted seatrout, moving out to slightly deeper areas — where lush grass and good tidal flow occur — is producing good action.

This springtime action can be as good as it gets, as these species are feeding.

On cooler days, it’s best to wait until the afternoon, when the sun has had a chance to slightly warm the shallow waters of the grass flats that these fish inhabit. Also, you’ll see the snook and reds strike more aggressively as water temps rise.

For those looking for a meal, the sheepshead bite is where it’s at in our waters. Fishing structure, whether from piers or bridges, or working reefs and wrecks by boat, anglers are hitting good numbers on these tasty fish. Using live shrimp as bait is producing the bite for most sheepies. While targeting sheepshead, you may find some snapper and grunts mixed in, especially when fishing over reefs and wrecks.

Capt. Aaron Lowman is running his charters on the flats of southern Tampa Bay and its adjacent waters. Using free-lined shiners as bait on deeper grass areas is attracting many catch-and-release spotted seatrout to the hook for his clients. Moving slightly shallower, around flats where the mangrove shorelines exist, is producing action on shiners. Catch-and-release snook and redfish are finding their way to the hook on these shallower flats. For those looking to bring home dinner, Lowman is fishing rock piles and reefs in Tampa Bay. In these areas, live shrimp are producing sheepshead, grunts and snappers.

Capt. Warren Girle is using live shrimp as bait while fishing in the wind-sheltered residential docks and canals. Casting shrimp on a weighted rig under the docks is resulting in catch-and-release redfish coming in at 20-24 inches. Mixed in with the reds are black drum and keeper sheepshead.

Capt. Jason Stock is working inshore more often due to the weather and especially windy days. He’s finding live shiners as bait are working well for catch-and-release snook and redfish. To target them, Stock sets up his clients around oyster bars and mangrove shorelines. In these areas, they’re finding a few large catch-and-release spotted seatrout, too.

On less windy days, when Stock can run offshore, the bite consists of blackfin tuna and permit.

Capt. David White of Anna Maria Charters is putting his clients on their share of sheepshead in Tampa Bay. Using live shrimp around structure — rocks, docks and pilings — is producing these popular, fine-eating fish.

While fishing along the beaches, White is putting clients on black drum, whiting and pompano. They’re finding the pompano over deep grass areas in the bay. Catch-and-release snook are being caught using live shiners as bait. Shallow grass flats with good water flow are where White’s clients are catching the best numbers of these fish.

Jim Malfese at the Rod & Reel Pier at the north end of AMI overlooking Tampa Bay says sheepshead remain the main attraction. Pier fishers using live shrimp are pulling on sheepies running 12-15 inches, with bigger fish mixed in. In fact, a few sheepies exceeding 20 inches are being reported from the pier.

Other catches include black drum and catch-and-release redfish. Both are being caught on shrimp.

With the arrival of baitfish to the bay waters, some Spanish mackerel are being caught by anglers casting small jigs or silver spoons.