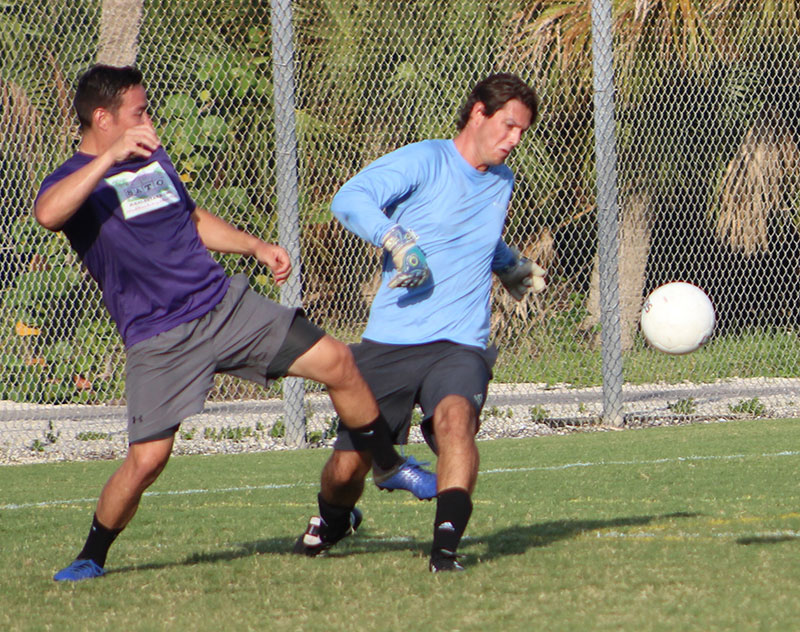 Sato Real Estate’s Ben Sato pokes the ball past hard-charging Max Gazzo, Ross Built goalie, during adult “indoor” soccer league action May 21 on the pitch at the Center of Anna Maria Island. The indoor league moved outdoors due to concerns for the spread of the new coronavirus. Islander Photos: Kevin P. Cassidy Sato Real Estate’s Erin Felipe settles the ball during soccer action May 21 at the center. Ross Built’s Greg Ross controls the ball in front of his net during May 21 adult soccer action at the center.

Adult soccer at the Center of Anna Maria Island was the first organized sport to get back into action amid the COVID-19 restrictions, but not without waivers required to play.

The center’s indoor league was one game from the end of its regular season when sports were shutdown due to the outbreak of the novel coronavirus.

Now the league is finishing the season and its championships on a small outdoor pitch at the center, 407 Magnolia Ave., Anna Maria.

The first game on tap was the May 21 matchup between Sato Real Estate and Ross Built.

After a slow start, Sato jumped out to a 1-0 lead in the eighth minute with an inside pass from Oliver Petereit to Lexi Sato, who fired a right-footed rocket past Max Gazzo in goal. Four minutes later, Erin Felipe found Ben Sato on the left side. Sato deked one defender and finished far post for a 2-0 lead and 13 minutes left in the half.

Ross Built answered five minutes later when Murat Akay dribbled up the left side, cut in and hit a nice shot with his outside right foot to halve the score. Two minutes later, Akay got loose up the middle and fired a shot that Sato goalie Jason Sato saved, but Greg Ross cleaned up the rebound to tie the score at 2-2.

With 3:47 left to play, Jake Ross carried the ball up the right side, where his cross found dad Greg on the back post for a tap-in and a 3-2 lead, which is how the half ended.

Ross Built wasted no time in the second half to add to its score as Greg Ross crossed the ball to Akay on the back post for a 4-2 lead 47 seconds after the restart.

Sato answered eight minutes later when Jason Sato made a save in goal, then quickly rolled the ball out and dribbled up the middle. He drew the defender and passed to brother Ben Sato, who finished to pull to within 4-3.

Jason Sato was at it again at the 12:50 mark with another save and a fast break, this time finding Lexi Sato, who found the back of the net to tie the game at 4-4.

The game remained tied until 8:45 left to play and Nate Talucci put the ball up the left side to Jake Ross, who took a touch before poking it past Jason Sato in goal for a 5-4 lead.

With time winding down and Sato pressing for the tying goal, they gave up two quick goals down the stretch. Andrew Ross and Greg Ross both picked up late goals to put the exclamation point on a 7-4 victory.

Players were happy to be back out running, although out of shape for soccer in the summer-like heat.

In other action, Duncan Real Estate outlasted Gulfview Windows and Doors by an 11-9 score, while Slim’s Place slipped past Pool America by a 9-7 score.

The league playoffs will kick off Wednesday, May 27, with two quarterfinal games, while the top two seeds enjoy what would normally be a well-earned bye to the semifinals.

After a seven-week hiatus due to restrictions for COVID-19, May 20 saw action return to the Anna Maria City Hall horseshoe pits.

Two teams emerged from pool play with 3-0 records during May 23 action and battled for the day’s bragging rights. Jerry Disbrow once again was in the winner’s circle, this time teaming up with Bob Heiger for a 23-6 victory over Don Mainfort.

Despite Gov. Ron DeSantis’ recent announcement that youth-related activities can resume, including summer camps and athletics, local rules are still in place for county-run fields and facilities.

It’s up to local officials to adjust the planned opening date of June 15 at the parks and fields.

So, when the county opens the fields, including G.T. Bray in Bradenton, Manatee Magic, the Manatee Area Youth Soccer Organization’s competitive teams, will announce tryout dates.

Players can register for tryouts at mayso.org.

There is no cost to take part in the tryouts.

Manatee Magic will only initiate payment plans after it becomes clear that COVID-19 is in our rearview mirror and the season is a certainty.

New players can go online and click on register in the upper right corner to create an account.

For more information, email me, VP of competitive soccer, at info@mayso.org.