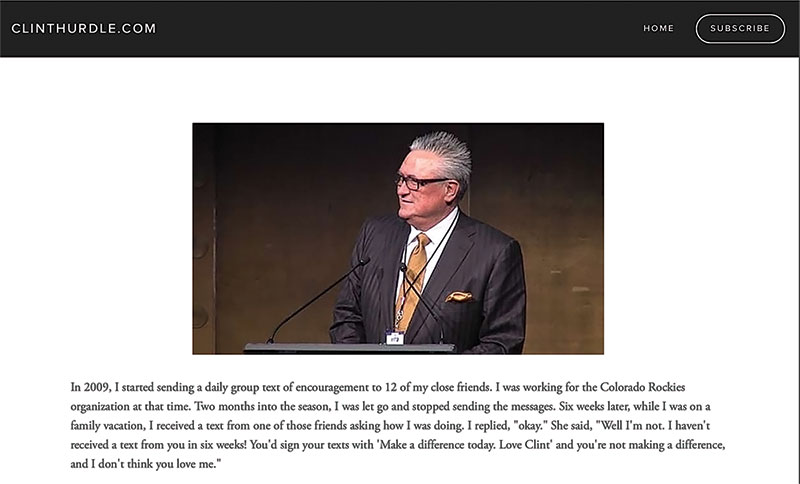 Big league inspiration Clint Hurdle, a Major Leaguer retired to Holmes Beach, offers encouragements to subscribers to his website at www.clinthurdle.com. The inspirations arrive daily via email. A recent encouragement asked this question: Whose expectations am I trying to fulfill? My own or those of someone else? Some emails might be long. Some might be 1-2-3. They’ll all conclude with: Make a difference today, Love Clint.” Islander Screenshot

Special to The Islander

Clint Hurdle never went to college, but he was offered an academic scholarship to Harvard.

“I was deeply intrigued about what it would be like to go to an Ivy League school and be a student,” Hurdle said.

Hurdle, who managed the Pittsburgh Pirates for nine years, was a coveted recruit during his senior year at Merritt Island (Fla.) High School, and not just because he played quarterback and could hit a baseball.

He was a straight-A student, except for one B in driver’s education.

Harvard came calling with a scholarship offer and the chance to play both sports.

“I probably put more thought and energy into that as I did (a similar offer from the University of Miami),” he said.

In their recruiting pitches, some schools told him they would make a tutor available or give him the option of skipping class if the academics got tough.

“We’ll figure it out. We won’t let you flunk,” Hurdle said they told him.

“Where, at Harvard,” Hurdle said, “(coaches said), ‘if your grades start to fall, classes get too hard, you don’t have to go to practice.’”

It turned out to be a moot point because Hurdle went straight to the minor leagues after the Kansas City Royals drafted him in the first round.

“That had been my dream since I was 5-years-old playing whiffle ball in the backyard,” he said.

Hurdle said he has no regrets, but he couldn’t shake one thought.

“I think watching college football you think, ‘Hey, I wonder if I could have done that.’”

So, the only remaining question surrounding Hurdle’s high school career was that B in driver’s ed.

“It was the only B I made in high school,” he said. “I flunked the live portion of the driving test. I actually ran a red light.”

It turned out Hurdle was the victim of a ploy by the teacher, who urged him to run a yellow light.

Hurdle didn’t understand until the teacher explained he did it to make him a better driver.

“He said, ‘This is exactly what’s going to happen to you the first night you’re out driving on your own. Somebody in the backseat is going to say something and you’re going to react.’”

Lesson learned, and now Hurdle is teaching his son, Christian, how to drive.

Jerry DiPaola is a Tribune-Review sports writer based in Greensburg, Pa. You can contact him by email at jdipaola@triblive.com or via Twitter.