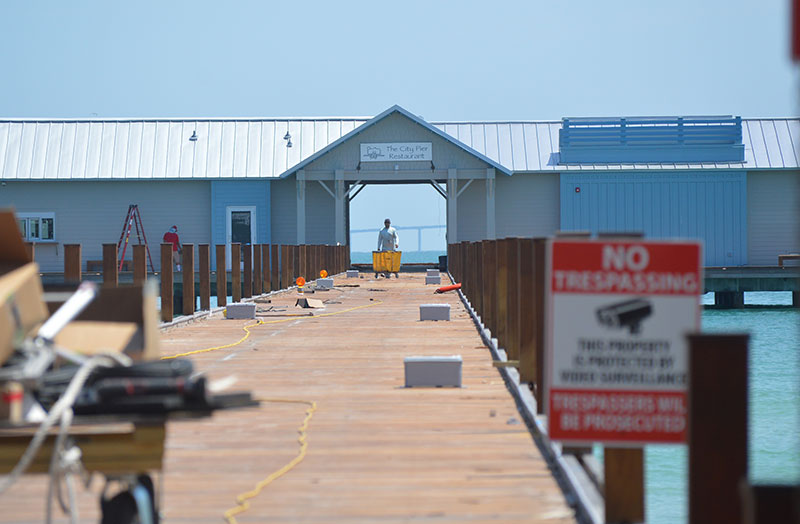 Work continues May 21 on the new Anna Maria City Pier, 101 Bay Blvd., as construction odds-and-ends are wrapped up. The city now plans to open the pier in June. Islander Photo: ChrisAnn Allen

Don’t load up the fishing gear just yet.

“They are putting the finishing touches on the pier,” Anna Maria Mayor Dan Murphy told The Islander May 22. “It’s just about done.”

The mayor said he planned to prepare a proposal for a soft opening for the new Anna Maria City Pier, 101 Bay Blvd., including a date, to be presented to the city commission at its next meeting at 6 p.m. Thursday, May 28.

The meeting will be held by teleconference. People can phone in for the meeting by following instructions in the meeting agenda posted to the city website at cityofannamaria.com.

Murphy said posts along the pier are being prepped for walkway lighting and workers are finishing the bathrooms.

Also, air conditioning and security cameras were installed along with benches and a new sign.

Fish cleaning stations were on order and cable was to be pulled and a modem installed by the end of the month, according to Murphy.

He also said signs will be placed to remind people to social distance.

Previously, the mayor said the city hopes to have the restaurant and bait shop open in late 2020 or early 2021.

The city commission voted May 14 to approve the bid from the Ugly Grouper restaurant, 5704 Marina Drive, Holmes Beach, allowing the mayor to negotiate a lease for the restaurant at the T-end of the pier.

The new pier was built to replace the old pier, which opened in 1911 but was closed after it was damaged by Hurricane Irma in September 2017.