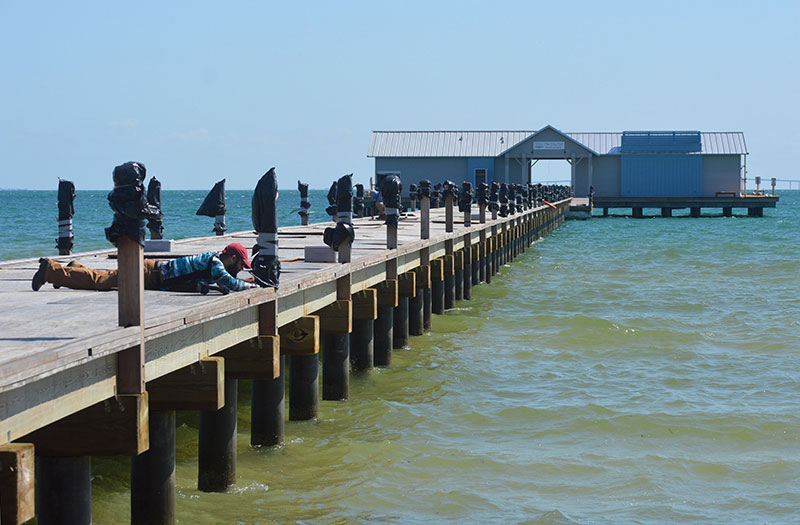 Fine-tuning continues May 13 on the new Anna Maria City Pier, 101 Bay Blvd. Construction on the pier began in 2018 and is in its final stages. Islander Photos: ChrisAnn Allen 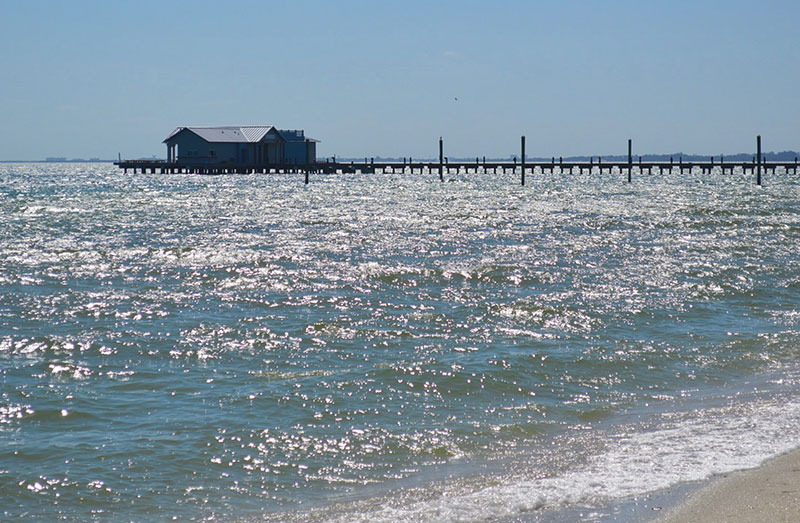 The new Anna Maria City Pier, 101 Bay Blvd., with construction nearly complete, is silhouetted May 13 in the sparkle of the morning sun on Tampa Bay.

The new pier was built to replace the pier that opened in 1911 but was closed after damages from Hurricane Irma in September 2017.

Ross and restaurateur Sean Murphy, owner of the Beach Bistro and Eat Here restaurants, and the Doctor’s Office bar, all in Holmes Beach, were the only bidders to respond to the request for proposals in April.

During a teleconferenced meeting May 6, the commission voted to approve Sean Murphy’s bid, but he withdrew his offer May 10, citing concerns with opening a restaurant during a pandemic.

So the mayor, who is not related to Sean Murphy, told commissioners at their May 14 meeting they could either do nothing, accept the Ugly Grouper’s bid and allow the mayor to start negotiating a lease, or repost the RFP at a later date and seek new bids.

City officials hope to have the restaurant and bait shop open in late 2020 or early 2021.

In discussions May 14, Commissioner Amy Tripp said she was leaning toward putting out another RFP, mainly because she suspected the novel coronavirus contributed to a lack of bids.

Commissioner Mark Short also favored reposting the RFP, adding that representatives of about 20 businesses attended the pre-bid meeting in late February, prior to concerns over the spread of COVID-19.

Commission Chair Carol Carter said it is the commission’s fiduciary responsibility to move forward with negotiations for a restaurant on the new pier and she supported the Ugly Grouper’s offer. She also said the family-friendly atmosphere offered at the Ugly Grouper would be a good fit for the pier.

For an alternative rent formula, the Ugly Grouper offered $144,000 per year and 2% of net sales.

Ross was aboard for the May 14 meeting call and said he was “at a loss” that the commission would consider putting the RFP back out to bid when the Ugly Grouper had a proven record and he met the terms of the RFP.

“In four years, we took a restaurant in the middle of the island from what it was to a restaurant that had, overwhelmingly, the highest average experience rating across four different social media platforms,” Ross said, referring to the renovation of the Barefoot Tiki Bar, the outdoor bar and music venue purchased by the Ugly Grouper partners. “I only do things to do them right.”

Five people spoke in favor of the Ugly Grouper during public comment May 14.

Steve Rose, owner of Bortell’s Lounge in Anna Maria and a restaurant investor, as well as a resident of Anna Maria, said one of his restaurants is over water, similar to the pier, and projects such as the pier restaurant are complex.

“Any restaurant that you put over water, down a dock, you face hurricanes, red tide and any delivery you have is going to require at least two other employees,” Rose said. “It’s a project.”

He said he was impressed by the transformation of the outdoor bar to the Ugly Grouper and, even though they are business competitors, he supported Ross for the pier.

Commissioners acknowledged the public support for the Ugly Grouper and Ross’ willingness to continue his bid and unanimously approved a motion to start negotiations.

Although construction nearly was complete May 15, the city planned to wait to open the pier to fishing and sightseeing until the novel coronavirus impact has been significantly decreased in Manatee County.