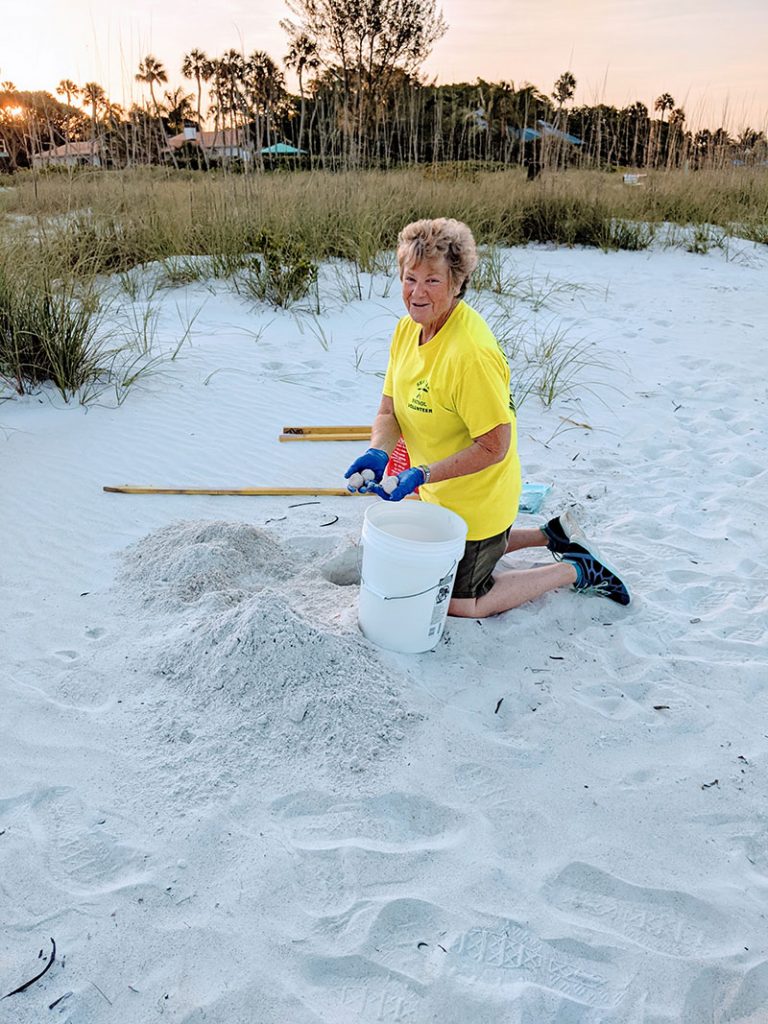 And they appear to be working.

Due to concerns over exposure to the novel coronavirus, as well as an upcoming Manatee County beach renourishment project that could overlap with nesting season, AMITW executive director Suzi Fox opted to patrol the beach by ATV and limit the pool of volunteers for the 2020 season, which officially started May 1.

In the past, about 18 volunteers would take to the beach on foot each morning just after sunrise May 1-Oct. 31 to look for signs of sea turtle activity — mostly flipper tracks remaining in the sand from the night before. Each volunteer would walk one or two days, with about 100 volunteers walking each week.

This year, AMITW is patrolling the beaches on three ATVs and 15 volunteers are sharing the duties.

Fox started the season with two people per ATV and one volunteer digging new nests on the beach outside of the renourishment zone for relocated eggs.

Since then, she’s trained several more people to rotate the activities, including marking nests with stakes and ribbons, digging new nests for the 100-plus-or-minus eggs in a clutch that require relocation and transferring the pingpong-ball size eggs to human-made nests.

Nests laid on beaches that are part of the prospective project — from 78th Street in Holmes Beach south to Longboat Pass — are being relocated to avoid being covered with sand pumped from offshore to build up the eroded shoreline. Sea turtle eggs incubate 45-70 days. And a surplus of sand atop a nest could prevent hatchlings from emerging onto the sandy surface and crawling to the Gulf of Mexico.

So turtle watch is relocating the eggs into nests dug by volunteers on beaches north and landward of the project, per Florida Fish and Wildlife Conservation Commission and U.S. Army Corps of Engineers instruction. The Corps helped fund the beach renourishment project.

The county had not released a start date for the renourishment as of May 7, although the mymanatee.com website stated the project could start in May and continue through September.

Fox said since fewer volunteers are on the beach more frequently, the process of spotting nests and collecting data is streamlined, with volunteers getting more “on-the-job training.”

“The new process is going very, very smoothly,” Fox said May 7. “We never miss a crawl, and we never miss eggs now. We are just getting more experience.”

She said most sea turtle patrols on other beaches in the state run patrols on ATV.

Additionally, Fox said beachgoers, which have increased since the county opened the public beaches May 4, have respected social distancing guidelines and let turtle watch do its job.

“Everybody is standing back and we stay 10-15 feet away and wear masks if we do encounter people,” she said.

As of May 7, there were five nests and eight false crawls — failed nesting attempts — on island beaches.

Fox said if the new way of patrolling the beach continues to work well through the end of season, she likely will employ the same method next season.

The funding has to come from somewhere.

One project will run from 78th Street North in Holmes Beach to about Fifth Street South in Bradenton Beach. Federal funding from the Army Corps of Engineering will pay 59.05% of the projected $20.5 million cost and the remaining 40.95% will be split between the state and county.

Of the cost for the southern renourishment, which will begin at Fifth Street South in Bradenton Beach and end at Longboat Pass, $2.65 million will come from the Federal Emergency Management Agency and $1.1 million will be split evenly by the state and county.

AMITW’s contract with the county was renewed in 2019 for three years.