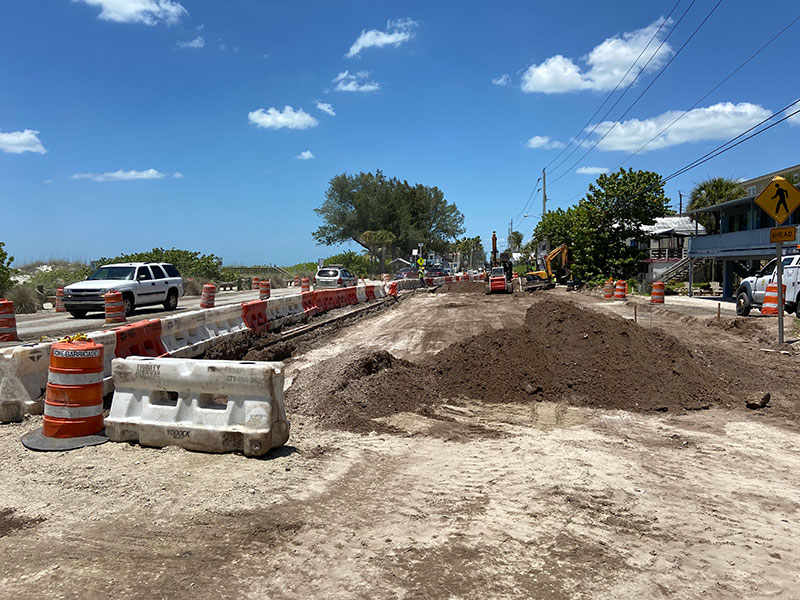 Harris-McBurney employees excavate a section of Gulf Drive/State Road 789 May 13 during the replacement of Force Main 1 in Bradenton Beach. Islander Photo: Ryan Paice

There is light at the end of the pipelines.

But it might take the rest of the summer to reach it.

Manatee County strategic affairs manager Ogden Clark wrote in a May 13 email to The Islander that Tampa-based Harris-McBurney was set to finish its work to replace Force Main 1 and resurfacing roadways by August.

Clark said Harris-McBurney was replacing a 15-foot-deep sanitary sewer line on Gulf Drive, as well as force main pipelines between Fifth and Sixth streets south and on Fifth.

He added that motorists on Gulf, Fifth and Sixth can expect traffic delays until the work is completed.

The project has slowed traffic, especially in February, when a section of Gulf Drive around Fifth Street South was reduced to one lane to accommodate construction of a manhole. Clark previously said additional lane closures may be needed to resurface and restore Gulf Drive.

However, Clark told The Islander no lane closures were needed for the contractor the week of May 18 to begin resurfacing and restriping Gulf Drive travel lanes and adjacent pedestrian pathways between Fifth and Sixth streets south.

The first section of restoration work will take a day to complete. The northbound lane of Gulf Drive will be shifted to accommodate the work, according to Clark.

Clark did not provide a time frame for additional work needed to restore the remaining impacted areas.