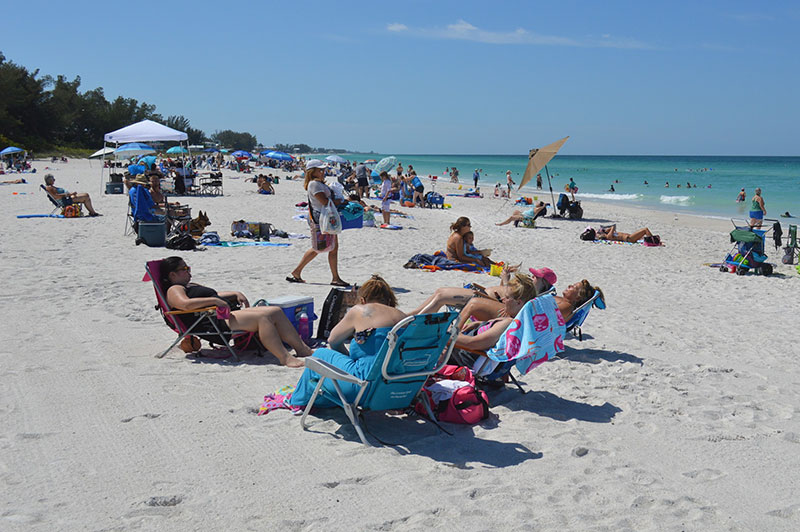 People gather May 13 at Manatee Public Beach, 4000 Gulf Drive, Holmes Beach. Manatee County opened its public beach parking lots to full capacity for the first time since beaches were closed March 20 due to concerns over the spread of the novel coronavirus. Islander Photos: ChrisAnn Allen 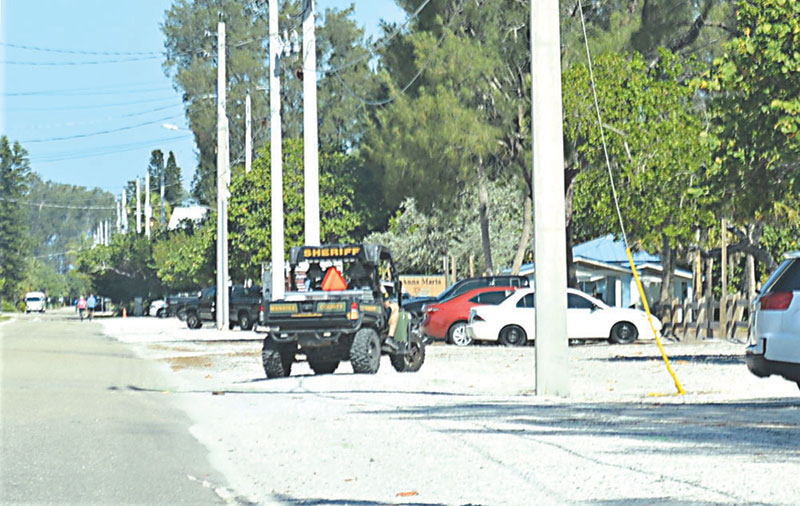 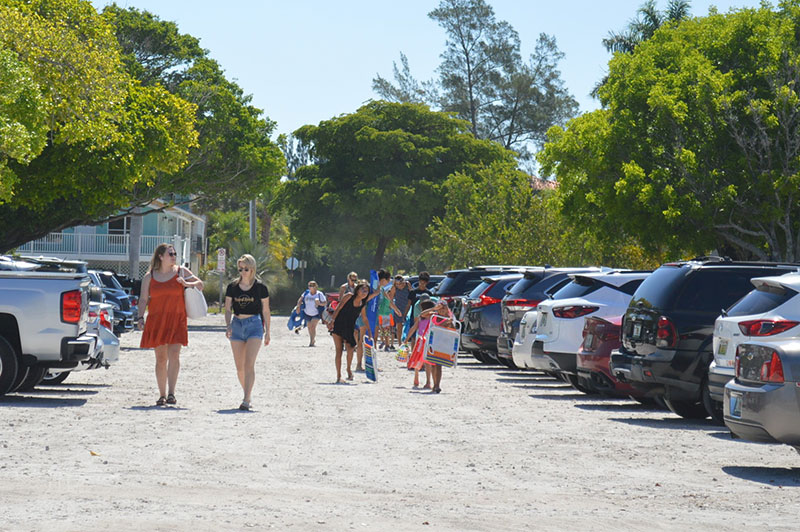 Beachgoers stroll May 13 through the parking lot at the Manatee Public Beach, 4000 Gulf Drive, on their way to the shore. Manatee County opened public beach parking to full capacity and the lot at the public beach was filled by noon.

“So we undertook a little experiment last week at our public beaches,” Manatee County administrator Cheri Coryea said as she began her May 12 presentation to county commissioners about reopening public beach parking during a teleconferenced commission meeting.

The county opened parking May 4 to limited numbers of vehicles at Coquina and Cortez beaches in Bradenton Beach and the Manatee Public Beach in Holmes Beach. Parking capacity was reduced to about half in the county-run beach lots and people were allowed to stay for two hours.

The “experiment” was deemed a success by the county, and commissioners unanimously voted May 12 to open the lots to full capacity and also to open parking at Bayfront Park, 316 N. Bay Blvd., Anna Maria.

The motion also included beach and parking patrol assistance for the municipal authorities from the sheriff on weekends and holidays through July 12.

“We were a little nervous,” Coryea said. “We weren’t sure what was going to happen, but the residents really, really stood out and did a great job.”

About 20,000 parking passes were issued the week beginning May 4 during monitoring by county code enforcement, and no citations were issued for violating the governor’s order or the parking regulations.

However, following holiday weekend-level traffic and a glut of illegally parked vehicles the weekend of May 9-10, officials and staff in the island cities opted to keep beach access and right-of-way parking closed.

During the May 14 Holmes Beach meeting, Police Chief Bill Tokajer told commissioners that he and Mayor Judy Titsworth reached out to Coryea during the county meeting and asked her not to open the public parking lot to full capacity.

“We told them that social distancing was more difficult to achieve with Saturday’s crowd and, it appeared to be the busiest beach day so far in 2020. Tokajer said that had the parking lot been filled to capacity, “the beach in front of it would not be able to handle another group from 150 more cars.”

In late April, Holmes Beach commissioners agreed to a parking plan proposed by Tokajer to remove 2,000 parking spaces from city rights of way after the city reopens parking. To qualify for beach renourishment, the city must provide 364 parking spots. Tokajer said the city will have 479 spots after the reduction.

The city prohibited on-street parking and beach access and rights of way parking April 10 to prevent crowding on the beach.

Tokajer said May 12 about 250 new “no parking” signs were ordered but would take about two weeks to arrive and another two weeks to install.

“Before we open our streets up, we need to get the new signs in place,” he said. “So we are looking at about 3-4 weeks at the earliest before we are prepared to open our streets.”

At a teleconferenced meeting May 14, Anna Maria Mayor Dan Murphy said the city issued more parking tickets May 9 than it had in one day in its history.

He supported the county’s decision to open public beach parking without restrictions.

Murphy also said reduced parking in Holmes Beach may result in increased illegal parking in Anna Maria and proposed a seven-day order, increasing parking fines from $35 to $100. The temporary increase was allowed, due to the declaration of emergency.

“At this point, we’re forced to react to it,” Murphy said. “We can’t let that situation happen again.”

Commissioners reached consensus on the increase and planned to meet in seven days to determine if the order would be renewed.

Murphy also directed public works and code enforcement to expand “no parking” zones, mostly in the northern part of the city, starting May 15.

Bradenton Beach Police Chief Sam Speciale said May 14 that he asked the county to install temporary barricades in the rights of way along Gulf Drive, near Coquina Beach, due to problems with people parking on the side of the road the weekend of May 9-10.

“We had people parking everywhere,” he said. “And my officers had to deal with a lot of verbal abuse from people.”

Speciale said social distancing became a concern when frustrated people approached his officers about the tickets.

With the expected Memorial Day weekend surge approaching May 23-25, the chief asked that people be more considerate of officers and other first responders.

“We understand that everyone has been cooped up for the last month or so, but there are certain things you can’t lose,” Speciale said. “People have to realize, if the county decides this isn’t working, they could go ahead and close the beaches again.”