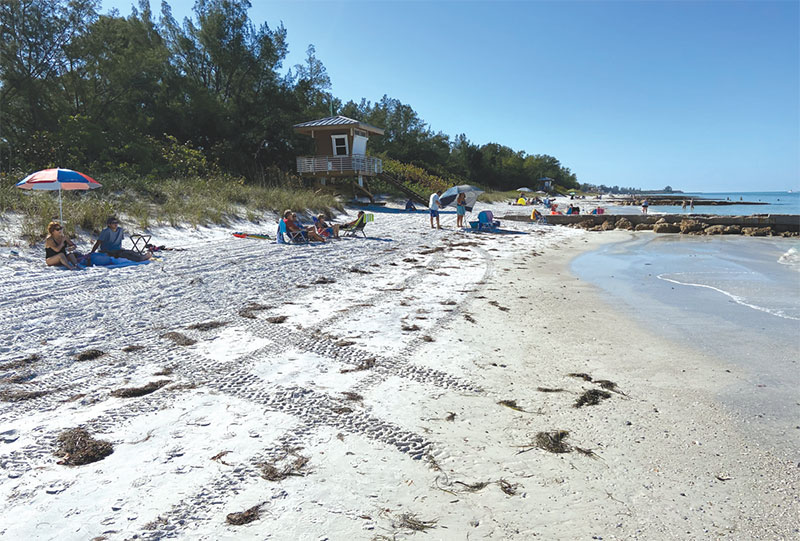 COVID-19 remained in check on Anna Maria Island as the first phase of the state’s plan to reopen went into effect.

Gov. Ron DeSantis reopened retail stores and restaurants May 4 with 25% capacity limits in phase 1 of his plan to reopen the state after a monthlong closure of nonessential businesses. He adjusted the plan May 8, announcing barbershops and salons could reopen May 11.

No new confirmed cases of the novel coronavirus were reported in the island cities the week ending May 10 and, so far, none of the cities had problems enforcing regulations for reopened businesses.

Holmes Beach Police Chief Bill Tokajer told The Islander May 8 that HBPD officers contacted restaurant owners to make sure they understood how to comply with the governor’s order.

“All of our restaurants have been doing an excellent job preparing for people to come in,” Tokajer said. “They’re doing everything by the (U.S. Centers for Disease Control and Prevention) guidelines and following all of our recommendations.”

“For the most part, we haven’t really seen any true violations,” Cosby said. “Everyone has really been working well with the city to make sure they’re compliant. Nobody wants to get shut down again.”

“It’s nothing that would be out of the normal if it weren’t for COVID-19,” he said.

Anna Maria Mayor Dan Murphy wrote in a May 8 email to The Islander that there had been no issues with reopened businesses.

He noticed an influx of people coming to the island and encouraged people to stay safe during their visits.

“We welcome all and want our visitors to abide by the same parameters that apply to our residents: social distancing, no gatherings of over 10 and enjoy the beauty of our beaches,” Murphy wrote.

But visitors were not enjoying the comfort of island vacation rentals, as check-ins and new bookings remained on hold — indefinitely.

DeSantis’ reopening plan kept such activity prohibited — including advertising availability, new check-ins and reservations for less than 30 days — in the first phase. Hotels, motels, inns, timeshares and resorts were excluded from the order.

Violators can be charged with a second-degree misdemeanor and vacation rental property owners are subject to having their licenses with the Florida Department of Business and Professional Regulation revoked.

The vacation rental prohibition has had support at island city halls, but it hasn’t gone unchallenged.

The suit, seeking an immediate injunction of the order and unspecified damages and fees, alleges the ban enacted in late March is vague, discriminatory and violates the U.S. Constitution.

“The stated goal of keeping risky outsiders from coming to Florida is defeated in view of capacity-filled RV parks and hotel parking lots filled with out-of-state license plates,” the suit alleges.

Anna Maria Vacations owner Joe Varner had been considering filing a suit against the order but instead filed a friend-of-the-court brief supporting Florida Beach Rentals. He did not respond to a May 8 call from The Islander.

Tokajer said that while the vacation rental prohibition had limited the number of outsider visits to the island, it could have been broader.

“I think it’s obvious that it is working. I think the measures that we’re taking have been instrumental in keeping our numbers very low,” Tokajer said.

He added that he would have included the motels and other nightly rentals in the prohibition.

In each case, HBPD officers issued renters notices to appear in court and reported the property owners or management companies to the DBPR per the state order.

Renters were allowed to continue their stay.

Seven violations of the vacation rental prohibition had been identified in Holmes Beach since its enactment March 27.

Murphy said no violations of the state order were identified in Anna Maria the week ending May 10.

He did not respond to a May 8 email from The Islander asking if he supported keeping vacation rentals closed.

However, Murphy previously said, “We need to safely step down the regulations and return to as close to normal as possible.”

Bradenton Beach Mayor John Chappie did not respond to a May 7 email from The Islander regarding vacation rental violations in the city.

But, Cosby said, “It didn’t really have an effect on us one way or another.”

DeSantis, as of Islander press time May 11, had not announced when the state would open the second phase of the three-phase plan or when he planned to lift vacation rental prohibitions.

The second phase, according to the report, will begin “when there is no evidence of a rebound or resurgence of COVID-19 cases and satisfies the benchmarks outlined in this Safe. Smart. Step-by-Step. plan.”

The Bradenton Beach Community Redevelopment Agency is taking steps to protect the public from COVID-19.

CRA members voted 7-0 May 6 to purchase 15 hand-sanitizer stations for $926.25 for placement and public use on Bridge Street.

Mayor John Chappie, a CRA member, said he would meet with Bradenton Beach Area Merchants members to discuss locations for the portable stations, as well as an inquiry as to any businesses willing to move the stations into their businesses at night to prevent theft or damage.

Chappie said at the next CRA meeting, members could discuss maintenance.

In other news, the city scheduled a commission meeting for 10 a.m. Thursday, May 14, to discuss an ordinance to boost open-air dining options for restaurants adjusting to COVID-19 safety guidelines.

Florida’s “plan for recovery” after a monthlong closure of nonessential businesses and other restrictions to deal with the coronavirus pandemic contains three phases.

The plan, subject to change as the phases are implemented, states that moving from one phase to the next depends on meeting benchmarks for health care capacity, declines in cases and advancing contact tracing and surveillance capabilities.