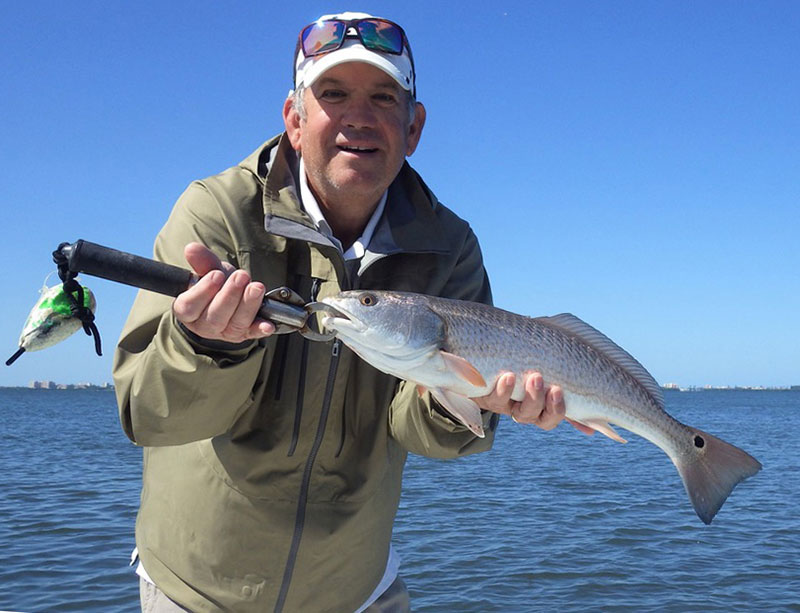 As we enter the month of May, tarpon fishing seems to be the topic of conversation.

Rumors of tarpon sightings are surfacing, although the real numbers of fish have yet to arrive.

That being said, reports for both inshore and offshore fishing are quite good.

Inshore on the flats, the fish are producing plenty of action. The key to finding the action is locating clean, clear water where good tidal flow exists. In recent days, rain has diminished the water quality to less than favorable in Anna Maria Sound and its waters to the south in Sarasota Bay. As a result, most anglers are finding their way north to the waters of the Manatee River, Terra Ceia Bay and even north of the Sunshine Skyway Bridge.

In these clear, pristine-looking waters, the top trio of catch-and-release species — snook, spotted seatrout and redfish — are apparent. Free-lining live shiners as bait is working well for all three. If you struggle at catching bait, try using soft plastics combined with a jig head. These will suffice. You may not see the results you’re used to when using live shiners, but you should get some action — especially from the trout.

Moving out to slightly deeper water also has its rewards. Fishing structure in Tampa Bay is worthy of some Spanish mackerel and even a few mangrove snapper. Most snapper inshore are on the smaller side but, if you’re not picky about filleting 10-inch snapper, you might be able to get a limit.

If you’re looking for bigger game — mangrove snapper above the 10-inch minimum limit — you may want to venture offshore. Reports of nice-sized mangrove and yellowtail snapper are increasing in frequency.

Anchoring and chumming over offshore reefs and wrecks sounds like it’s quite productive. Fishing ledges and hard bottom is producing action on these tasty fish, too.

And while offshore, you’ll want to target some migratory fish — blackfin tuna, kingfish, amberjack and African pompano. Free-lining baits over wrecks should get you connected with these species.

On my own Southernaire charters, I am targeting the catch-and-release sportfishing trio of snook, redfish and trout. The snook and trout are cooperating most days — especially when tidal flow is swift and clean and the water presents clear. As for the redfish, I’m seeing some, but only catching a handful here and there. Free-lining live shiners for the snook and trout is producing plenty of action. I am noticing the snook are a little spread out, so moving frequently is necessary if you want good numbers of hookups.

For the trout, it’s the opposite. Once I find some fish, there seems to be a bunch of them. Some mornings I’m seeing 15-20 trout caught in one area. Then you move slightly and nothing. A couple of spots later and it’s back to catching a bunch again.

Capt. Warren Girle is hooking catch-and-release spotted seatrout in Sarasota Bay. By drifting and jigging with soft plastics, Girle is finding encouraging numbers of these popular fish. Deep grass flats where clean water exists is key to getting on this bite. Mixed in are some ladyfish and Jack crevalle. Using live shiners is working, especially on the shallower grass flats. Catch-and-release snook and redfish are present in these areas and are readily taking live bait offerings.

Capt. Aaron Lowman says inshore fishing in Tampa Bay and Sarasota Bay is going strong. Targeting catch-and-release snook and redfish along mangrove shorelines, oyster bars and sandy potholes is resulting in plenty of action. Live shiners are the bait of choice, although soft plastics on a jig head are a good bet, too. Targeting spotted seatrout on deeper grass flats also is producing good catch-and-release action. Lowman says concentrations of the seatrout can be found in areas with decent tidal flow and clear water.

Fishing structure in Tampa Bay and the Gulf of Mexico is proving to be quite good, according to Lowman. Mangrove snapper and Spanish mackerel are the primary targets in these areas.

Capt. Jason Stock is targeting blackfin tuna while chartering offshore. With an abundance of sharks that also are on the hunt, he says the tuna can be challenging to get to the boat once on the line. Lucky anglers are finding success, but many of the tuna are chomped by the prey before making it boat side. When the sharks become intolerable, Stock is moving to other areas to target permit. He’s finding live crabs cast over offshore wrecks and reefs are resulting in permit up to 30 pounds. In the same areas, amberjack are making their presence known. Casting live shiners or pinfish is luring these reef predators to the hook.

Lastly, Stock says anchoring and chumming over structure is working well to fill the coolers with mangrove snapper.

Live baits such as shiners and pinfish are producing action, but, according to White, frozen baits like sardines will work, too.