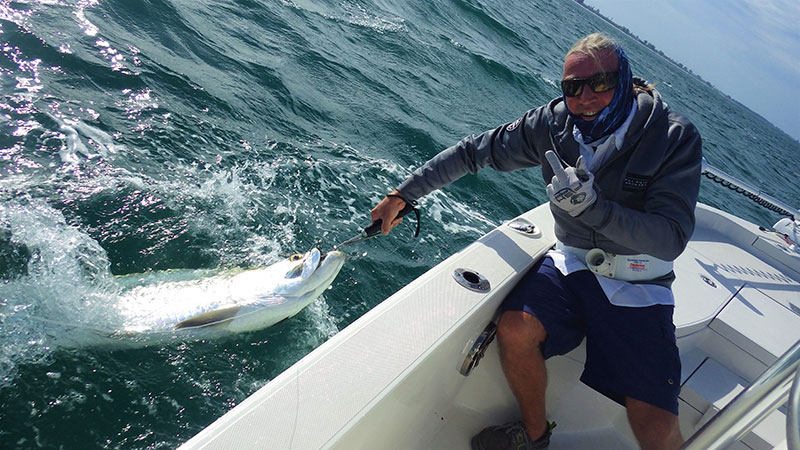 Michael Corbino of Longboat Key holds onto his May 14 catch, a 100-plus pound tarpon, just long enough for a trophy photo. Corbino was guided by Capt. Warren Girle in the nearshore waters of the Gulf of Mexico, where he hooked up the silver king on a pass crab.

The long-awaited migration of tarpon to the waters surrounding Anna Maria Island is occurring, although the real push of fish has yet to arrive.

Targetable schools are here, but the numbers are spread thin.

And that’s not to say they weren’t being caught this past week.

In the weeks ahead, we should see a big influx in numbers of fish. And while we wait for the larger mass of tarpon to arrive, the sharks already have taken notice. Reports of hammerheads and bull sharks chasing tarpon are being heard daily, with some hammerheads exceeding 15 feet in length, and the bulls aren’t far behind.

Seeing these majestic creatures in their element is truly fascinating. That is, as long as you’re not in the water. Seeing them from a boat or the beach is optimum.

So as the tarpon population increases in our waters, you can expect to see more large sharks.

On the flats, catch-and-release snook and trout are dominating the bite. Finding clean water is key to getting in on the action. Areas where clean water exists usually have good tidal flow, lush grass flats and are free from floating seaweed and other debris. Casting live shiners as bait is working best for the snook. As for the seatrout, casting soft plastics on a jig head works well.

Moving offshore, blackfin tuna are the highlight for yet another week. Other migratory fish such as kingfish, African pompano and cobia are being found. Bottom fishing for snapper is resulting in many mangroves and yellowtails. Red grouper are being reeled up from the depths, too.

On my own excursions with Southernaire charters, I’m finding the catch-and-release snook action quite exhilarating. Fishing swift tides in areas of clean, clear water is resulting in many catch-and-release snook on the hook for my sportfishing clients. Casting live shiners around mangroves and oyster bars is proving to work best. Most snook catches are following 20-26 inches.

As for the trout, deeper grass areas are holding good numbers of fish. Strong incoming tides seem to be the best when targeting these buck-toothed fish. Live free-lined shiners or soft plastics are luring the trout to the hook.

Capt. Jason Stock is spending plenty of days on patrol along the beaches of Anna Maria Island and Longboat Key in search of tarpon. Scattered schools of fish are being found cruising within a few hundred yards of the beach, which makes them quite targetable in the clear waters of the Gulf of Mexico. Casting live crabs or threadfin herring is working to trigger a strike.

And with the tarpon come the sharks. Bull and hammerhead are most frequently being sighted.

In fact, Stock managed to have a 16-18 foot hammerhead take a bait and briefly stay on the line.

Moving offshore, Stock is finding blackfin tuna accommodating his clients. While targeting the tuna, Stock is encountering more sharks, one of which happened to be a tiger shark estimated to be 20 feet. Gives a new meaning to “Tiger King.”

Capt. Aaron Lowman is targeting catch-and-release snook along the mangrove shorelines of the Manatee River and ranging north to the Sunshine Skyway Bridge.

Catch-and-release spotted seatrout are being caught with regularity. Again, swift tides during the full moon produced a better bite then those tides occurring during the waning moon.

Capt. David White is investing most of his time pursuing tarpon. Fishing along the beaches of Anna Maria Island and Longboat Key is worthy of sighting schools of fish, as well as in the passes to the north and south of Egmont Key. Casting live pass crabs or threadfin herring is proving to attract some action from the silver kings.

Moving offshore, African pompano and blackfin tuna are being caught by White’s clients on baits fished toward the surface.

Bottom fishing is resulting in red grouper, yellowtail and mangrove snappers. For bait, White is carrying an assortment — pinfish, sardines and shiners.

Running up on fish that are daisy-chaining or slowly cruising in schools in depths of 10-20 feet of water just off the beach is producing action.

On a recent trip, Girle put a client on a hookup on the first cast of the day — a solid 100-pound fish.

Although this day started out with a bite, not every day does, but Girle is consistently leading clients to numerous hookups and trophy photos on his spring tarpon trips.