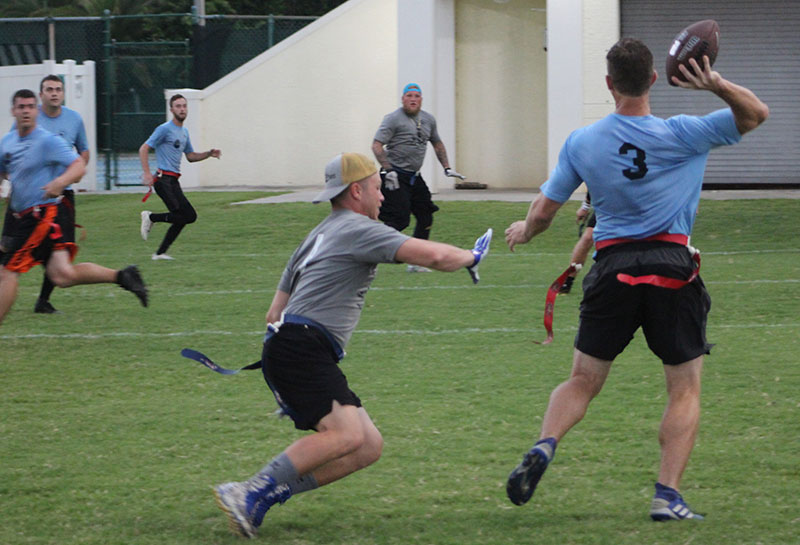 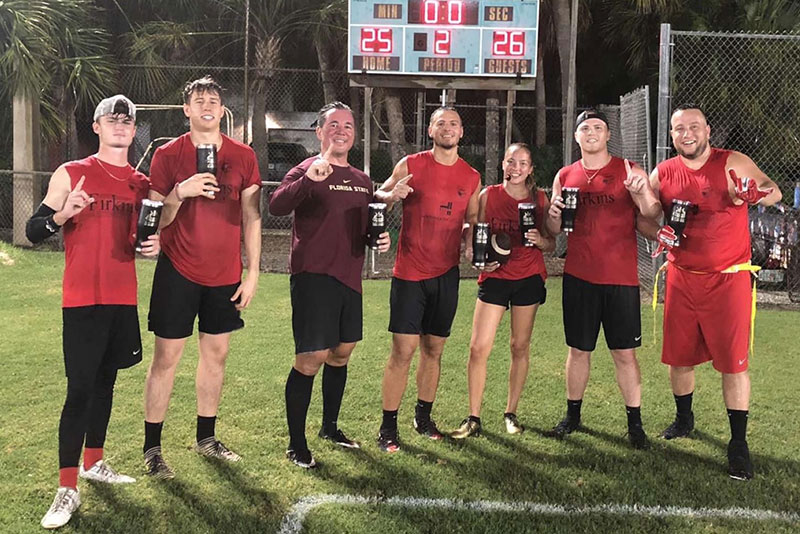 The adult flag football league at the Center of Anna Maria finally concluded — after a COVID-19 delay — with semis and the championship played June 11.

The teams also had to wait a bit for the weather to cooperate.

Moss quarterback Ryan Moss threw three touchdown passes, including two to Dina Calvary, who finished with a game-high eight catches on the night. Jordan Demers added a touchdown catch in the loss, while a pick six by Bradley Coleman and an extra-point reception from Jon Moss completed the scoring.

Firkins Automotive advanced to the title game with a 25-18 victory over Lancaster Designs behind three touchdown passes from Jason Sato and a seven-catch, three TD performance from Briley. Richardson threw for a touchdown and added a touchdown reception, while Tim Holly completed the scoring with a sack that resulted in a safety.

Cameron Kawcak threw for a score and added a touchdown reception and an extra point to lead Lancaster Designs, which also received a touchdown pass from Mike Gillum. Brandon Kull completed the scoring for Lancaster with a touchdown catch.

Quarterback Connor Haughey threw a pair of touchdown passes to lead Capt. Sky Cruises, which also received a touchdown catch from Brandin Holcomb in the loss, and a touchdown reception, sack and an interception from Olivia Haughey.

Horseshoe action at the Anna Maria City Hall pits produced an outright champion at the June 10 games. The team of Norm Good and Gary Howcroft forged the lone 3-0 record in pool play to earn a trip to the winner’s circle.

Play gets underway at 9 a.m. Wednesdays and Saturdays at the Anna Maria pits. Warmups begin at 8:45 a.m. followed by random team selection. There is no charge to play and everyone is welcome.

Manatee Magic, a Manatee Area Youth Soccer competitive league, has set tryouts for boys and girls for the 2020 soccer season now that the soccer fields are open at G.T. Bray Park in Bradenton.

Players must register in advance at mayso.com and will be required to have their temperature taken by a MAYSO official immediately prior to the tryout.

Open practices also will be held to allow for players unable to attend the scheduled tryouts.

There is no cost to try out for Manatee Magic, but there is a cost to play the season.

Returning players can reach out to their coach. New, potential players need to reach out for the alternative tryout schedule.

Email me, VP of competitive soccer, at info@mayso.org.