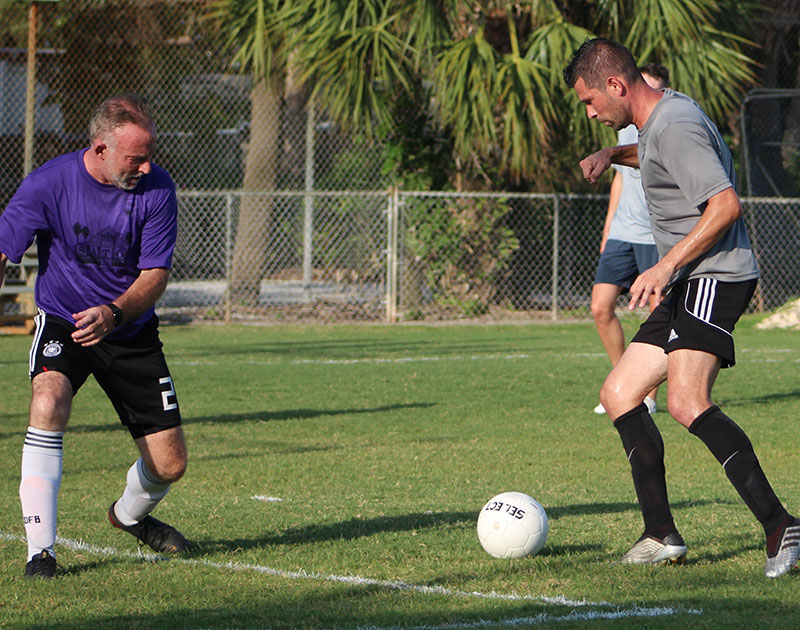 Action kicked off May 27 outdoors on the pitch for the “indoor” adult soccer playoffs at the Center of Anna Maria Island.

The indoor season went on hold when the coronavirus pandemic shut down the center, but matches have resumed outdoors.

The evening matches began with No. 5 seed Sato Real Estate posting a 4-3 victory over No. 4 Ross Built. Sean Flynn scored a pair of goals to lead Sato, which also received a goal from Ben Sato and a goal and 15 saves from Josh Sato in the victory.

Connor Bystrom scored twice to lead Ross Built, which also received a goal from Murat Akay and 12 saves from Max Gazzo in the loss.

The second game of the evening saw No. 6 Gulfview Windows and Doors earn a 7-5 upset victory over No. 3 Pool America behind four goals from Keith Mahoney and two goals from Raul Loera. Ryan Moss added a goal and an assist, while Brandin Holcomb came up with 12 saves in the victory.

Chris Scott scored a hat trick and Chris Klotz added two goals to lead Pool America, which also received an assist in the loss from Gerardo Urbiola and 11 saves from Jason Sato.

The semifinals will kick off at 6:45 p.m. Thursday,  June 4, with No. 2 Slim’s Place taking on Sato, followed by undefeated Duncan Real Estate vs. Gulfview Windows and Doors. The winning teams will return to the pitch at 9 p.m. for the championship match.

A new season of adult soccer will start June 18 with Thursday night games. Players must register by June 11. The cost is $10 for center members and $96 for nonmembers. Players can register at centerami.org or in person at the center, 407 Magnolia Ave., Anna Maria.

Adult flag football hit the reset button at the center, mirroring the proposed restarts being floated by the National Hockey League and the National Basketball Association with a jump into the playoffs!

Quarterfinal action restarted May 28 with No. 4 seed Firkins Automotive rolling to a 56-18 victory over No. 5 Slim’s Place behind four touchdown passes from Jason Sato and a touchdown pass and touchdown reception by both Chase Richardson and Cory Banks. Matt Briley also had a big game, catching two touchdown passes, scoring a pair of extra points and adding three pick-sixes. Kevin Roman and McKenna Ainger both added touchdown catches to complete the scoring in the rout.

Matteo Ferris led Slim’s Place with a pair of touchdown passes, while Tim Shaughnessy added one. Caleb Roberts, Ben Sato and Bri Roberts each caught touchdown passes in the loss.

Danny Murphy threw a pair of touchdown passes to Chad Woods to lead Rays Ramblings in the loss.

The third game of the night saw No. 1 seed Moss Builders score a forfeit victory over Ugly Grouper, which was unable to field a team.

Beach Bums was led by Jaret Rojas, who connected with Cooper Rosier for a touchdown, while Kemo Harris made an extra-point reception in the loss.

The action will continue June 11, when No. 3 seed Lancaster Designs takes on No. 4 Firkins Automotive, followed by No. 1 Moss Builders facing off against No. 7 Capt. Sky Cruises.

The winner of those games will meet in the championship game at 8:30 p.m.

Bob Heiger and Tim Sofran posted the lone 3-0 record in pool play, negating any need for playoffs during May 27 horseshoe action at the Anna Maria City hall horseshoe pits.

Two teams emerged from pool play during May 30 action. The team of Jerry Disbrow and Heiger fell behind Sofran 11-3 before Disbrow and Heiger turned on the heat, scoring 18 straight points and back-to-back double ringers to end the game with a 21-11 advantage and the day’s bragging rights.

Play gets underway at 9 a.m. Wednesdays and Saturdays at the Anna Maria pits. Warmups begin at 8:45 a.m. followed by random team selection.  There is no charge to play and everyone is welcome.