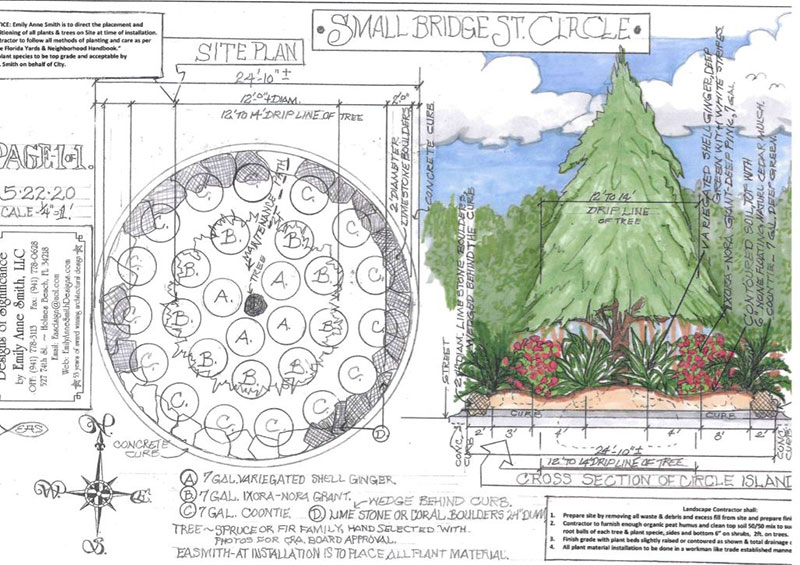 A schematic shows the proposed landscaping for the roundabout on the east end of Bridge Street in Bradenton Beach. Islander Courtesy Graphic

Bradenton Beach — The circle may get a cube.

There may be funding for a sculpture — a monument, abstract or real, a leaping dolphin, a lumbering manatee or a school of fish in the roundabout by the Bradenton Beach pier.

But who will conceive and create the artwork?

Bradenton Beach Community Redevelopment Agency members voted 4-0 June 16 to invite local artists to submit their concept for a sculpture in the roundabout at the east end of Bridge Street.

CRA member Jake Spooner, also a city commissioner, suggested hiring a local artist to create a sculpture for the roundabout.

CRA member David Bell then suggested making the sculpture moveable, to be displayed in different places within the district.

The discussion on a sculpture followed designer Emily Anne Smith’s presentation of her landscaping proposal for the roundabout, including a barrier of coral rock around the edge of the median and a large spruce or fir tree in the center — seasonally appropriate for Christmas decorations.

Smith said the central tree wouldn’t block a driver’s or pedestrian’s view of the Historic Bridge Street Pier, 200 Bridge St. She added that the CRA could plant a shorter spruce or fir if visibility is a concern.

However, Mayor John Chappie, also a CRA member, said he preferred placing palm trees in the roundabout instead of a spruce or fir for visibility and an island aesthetic.

Smith said she proposed planting palm trees throughout the district, so spruce or fir would be a “necessary” change of pace. She added that evergreen is easier to maintain than a palm.

The CRA decided to issue a call for artists before proceeding on the landscaping designs.