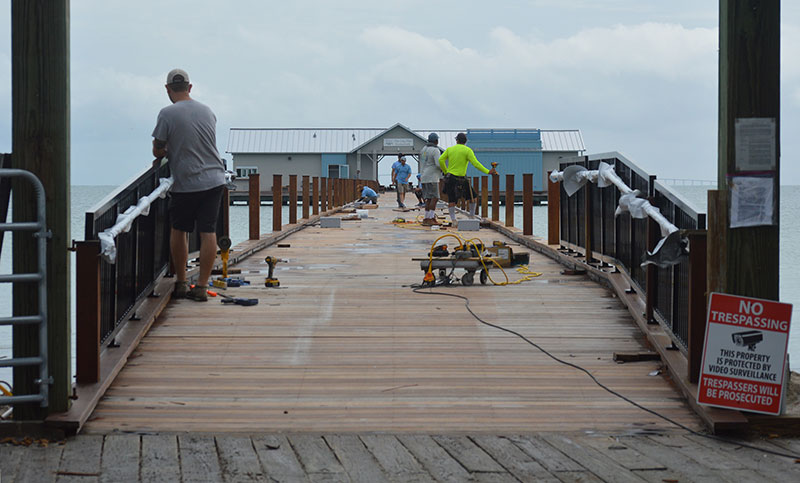 But it won’t be long before a new pier is ready for visitors.

And nearby business owners are hopeful pedestrian traffic in the city will pick up when the pier opens June 19.

“We’re very excited for it to open,” former Commissioner Brian Seymour, owner of the Pine Avenue General store, 503 Pine Ave, said June 4. “I know right now it is only going to be open during the day, but, hopefully, that will help our foot traffic on Pine Avenue.”

City commissioners May 28 consented to Mayor Dan Murphy’s proposal for a limited opening for the pier 8 a.m.-5 p.m. Friday-Sunday.

The city opted to delay a grand opening due to the coronavirus restrictions and safety guidelines. The pier will be limited to fishers and strollers, and no large crowds or alcoholic beverages will be allowed.

The city agreed to consider extending the days and hours after 30-45 days.

The city plans to pay off-duty deputies from the Manatee County Sheriff’s Office to keep watch on the pier activities during the operating hours.

The new pier was built to replace the pier that opened in 1911 but was closed, and ultimately demolished by the city, after damages from Hurricane Irma in September 2017.

Ed Chiles, Anna Maria resident and owner of the Sandbar Restaurant, 100 Spring Ave., Anna Maria, among other businesses, also is a member of the county tourist development council that contributed $1.5 million in pier funding. He said June 4 that he is looking forward to the opening.

“I think we are all excited to continue the 110-year tradition of kids, families and individuals creating great memories on this island paradise,” Chiles said. “And a soft opening is prudent in light of the COVID-19 situation.”

In the meantime, Murphy told The Islander June 4, “The pier has been completed and final inspections are taking place this week.”

Previously, he said the city hopes to have the restaurant and bait shop open in late 2020 or early 2021.

The new tenant or the city will complete the buildout of those areas.

The city commission voted in May to approve the bid from the Ugly Grouper restaurant, 5704 Marina Drive, Holmes Beach, and the mayor is in negotiations with the restaurant owners, while the city attorney attempts to settle with the former tenant, Mario Schoenfelder, whose lease ends Dec. 15.

Schoenfelder’s lease payments were abated when the pier closed in 2017.

“I’m proud that the city has finally gotten the pier substantially finished,” Seymour said. “It’s just about ready for the public to go out and enjoy the No. 1 tourist destination in Manatee County.”