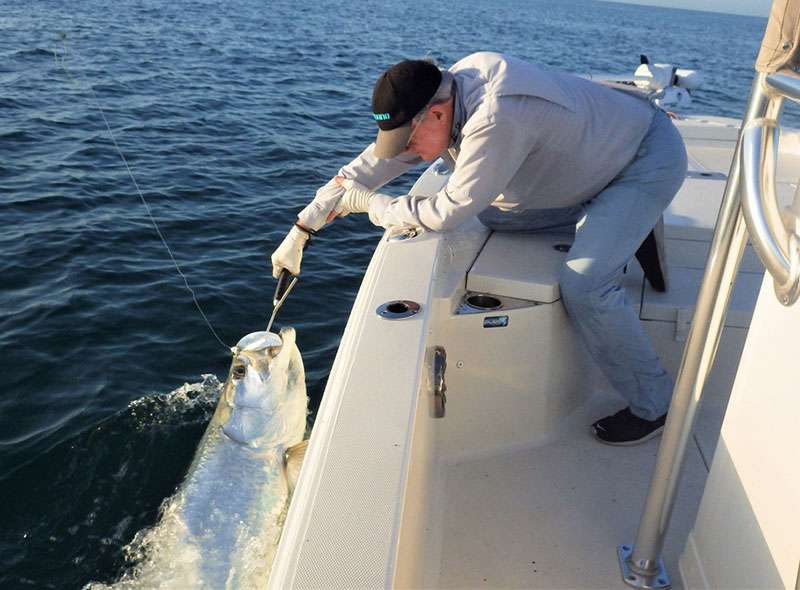 Gary Loughlin of Sarasota holds onto his tarpon catch May 17 for a photo. He hooked the sparkler on a pass crab while on a charter fishing trip with Capt. Warren Girle.

Tarpon are the main attraction in the water surrounding Anna Maria Island for yet another week.

And plenty of anglers are suffering from tarpon fever after spending hours — even days — on the water attempting to get a hookup.

There are large schools of the silver king cruising the beaches of Anna Maria Island and Egmont and Longboat keys.

There also are fish gathering in the passes.

But tarpon can be finicky, so carrying an assortment of bait is good advice.

Typically, pass crabs and threadfin herring are enough to get the job done, but sometimes you need to mix it up a little. Casting pinfish or chunks of ladyfish can attract a hookup — especially if the tarpon isn’t dialed in on crabs or threadfins.

Whatever the bait, it’s a thrill of a lifetime and well worth the work for the lifetime trophy photo.

Meanwhile, fishing the flats of Tampa Bay is producing good action. Catch-and-release snook are feeding during swift moving tides, and don’t be surprised to hook into a catch-and-release redfish while targeting snook, as both forage in the same areas.

Completing the catch-and-release trifecta, deep grass areas hold good numbers of seatrout. Finding good water is key to getting the bite. Areas where water is murky or stagnant will not hold fish. Clear, moving water over deep grass is best.

As far as offshore fishing goes, migratory fish — amberjack and blackfin tuna — are the week’s highlight. Casting live baits over structure attracts the high-speed fish to bite, while bottom fishing is good for red grouper, yellow tail and mangrove snapper.

On my Southernaire charters, I’m finding good action inshore. Catch-and-release snook are accommodating as long as the tide is moving, with most hookups happening around mangrove edges and oyster bars. Fish 20-30 inches are the norm. Targeting catch-and-release spotted seatrout is a lot of fun for my sportfishing clients. Working deep grass areas is resulting in many trout 18-20 inches. Mixed in are big Spanish mackerel, ladyfish and jack crevalle.

Capt. Warren Girle is spending most of his days in the tarpon hunt, seeking schools of fish running along the beaches of Anna Maria Island and Longboat Key. Once a school is located, he approaches with his trolling motors to get within casting range with a pass crab or live threadfin thrown into the school. This is resulting in catches in the 100-pound range. Some are smaller. Some are bigger.

When not targeting tarpon, Girle is working the flats of Sarasota Bay. Catch-and-release seatrout are coming to the hook over deep grass areas south of Long Bar. Mixed in on this bite are ladyfish, bluefish and a few Spanish mackerel. Fishing shallower flats is resulting in some catch-and-release snook and a few catch-and-release redfish for the sportfishers.

Capt. Aaron Lowman is putting his clients on a good catch-and-release snook bite around the stronger moving tides. Free-lining live shiners gets the linesiders to bite. According to Lowman, humming heavily is key to getting these fish to fire off — so carrying an ample amount of bait is crucial. While targeting the snook, a few catch-and-release redfish are being caught, too. Catch-and-release spotted seatrout are being caught in good numbers over deep grass flats. Again, swift moving tides are probably the best indicator for producing the bite.

Fishing artificial reefs and wrecks also is producing action for Lowman. Spanish mackerel are present in these areas as well, as are mangrove snapper.

Capt. Jason Stock says tarpon fishing is better by the day, as we progress through the season — and many large sharks are showing up for the bite, too.

When not targeting tarpon, Stock is working offshore, where amberjack are in season and responding to surface poppers, as well as live bait. The blackfin tuna bite is still happening, although Stock warns that as a water temps rise, the fish will be moving farther offshore. The sharks are dialed in on these fish, too, and wreaking havoc. The predators also are causing the tuna to move. Lastly, bottom fishing for snapper is going well, and mutton and yellowtail are the top catches this week for the cooler.

Capt. David White is getting as much tarpon time as he can, but still finding time for some offshore fishing, where he’s putting anglers on plenty of amberjack and some African pompano. Bottom fishing for red grouper and mangrove and yellowtail snappers is producing good action. For bait, live pinfish and shiners are working, as well as frozen sardines. Moving inshore, tarpon are the main attraction with frequent catches of silver kings weighing 80-100 pounds.

Jim Malfese at the Rod & Reel Pier is happy to see the pier open and the fishing is quite good. Pier fishers using live or frozen shrimp as bait are catching an assortment of species. On the frozen shrimp, black drum and flounder are responding nicely. Catch-and-release redfish are being caught by anglers soaking frozen shrimp on the bottom. And the live shrimp fishers are hooking into some catch-and-release snook, as well as a few mackerel and blue runners.

Lastly, live and frozen shrimp is attracting some mangrove snapper to hookup with the coolers.